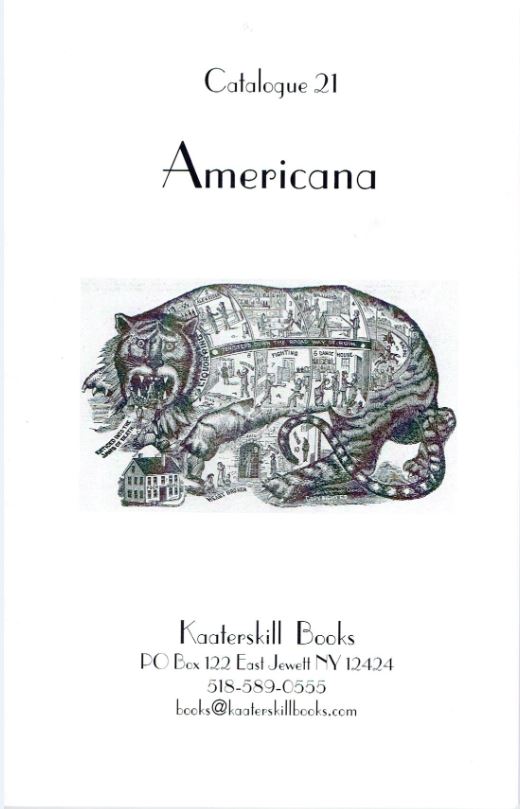 Kaaterskill Books has issued a new catalogue of Americana. Usually, we try to determine which areas of Americana, but we will just call this catalogue Americana. Within the field, anything goes. It is mostly old, 18th and 19th centuries, but there are some more recent titles, though they describe earlier times. Here are a few of the items you will find in this latest selection from Kaaterskill Books.

What is the horrible beast pictured on the cover of this catalogue? It is the Ten Steps Down the Broad Way of Ruin. This broadsheet comes from the late 1870's, so it wasn't video games and smart phones eating away at the moral fabric of youth. Here is what it was, in ten easy steps: 1. enticed into the jaws of death by drink; 2. ale and cider; 3. wine and beer; 4. billiards; 5. racing; 6. dance house; 7. fighting; 8. murder and arrest; 9. jail; and 10. hanging. Perhaps it is because of the fear instilled in them by this broadside that youth no longer drink, play pool or dance. The tiger's head was copied from an early work by Thomas Nast, though this beast was labeled "Liquor Ring," instead of Nast's favorite target, Tammany. Item 99. Priced at $750.

We expect to hear some nasty things said by candidates of one party toward those of another, but within the same party? Evidently, a nominating committee of the Whig Party in the 18th Ward of New York City selected a candidate for state assembly that seriously displeased "A Number of Whigs of the 18th Ward." They sent this printed letter, presumably to someone influential in making the final decision, explaining their position this way: "Dear sir - the Whig Nominating Committee of the Eighteenth Ward have nominated as our candidate to represent us in the Assembly of this state, a person by the name of William D. Greene, a man who has never voted in our ward, but is the person understood to have married, recently, a notorious prostitute by the name of 'Sal Tuttle,' and for many years kept a house of ill-fame in the lower part of the city." Frivolous Sal was a peculiar sort of a gal. This group of Whigs then asks the recipient that, presuming like the respectable Whigs in the Ward he would "feel disgraced by such representation in the Assembly of our State," he use his influence with the nominating committee to select another candidate. The exact circumstances in the 18th Ward at that time are forgotten, but perhaps it had to do with the breakdown of the Whig Party, North vs. South, liberal vs. conservative, that would quickly lead to the complete disintegration of the Whig Party. Item 64. $400.

Here is a description of a debate that carries on today over the language spoken by immigrants in the United States, only then it was German rather than Spanish. It also describes the eventual conclusion of this debate. Item 84 is Anglo-Germanism or the Significance of the German Nationality in the United States. It is an address given by Philip Schaf at a German society at Marshall College in 1846. Dr. Schaf had been sent by the German Reformed Church to America to train ministers, teaching them in the German tongue. The students rebelled. They wanted to be taught in English. The first generation immigrants wanted the retention of the German language and traditional German customs, and Schaf agreed with them, until he was thrust into the classroom with the second and third generations. He came to recognize that retaining traditional language and customs would only drive the younger generation away from the church. He was denounced as a traitor to his heritage by the German newspapers, but as with all immigrants to America, while the first generation may retain its original language, the generations that follow get melted into the pot. This is the 1846 first English language edition, following, naturally enough, the German. $250.

Item 61 is titled Photographic Album. Hoffman House, circa 1885. This is an elephant folio book with 46 large (11 ½ x 6 ¾) photographs and 184 advertising cards. This album would have been kept in the lobby or some common area of the Hoffman House hotel in New York City. Albums such as these were often found in the better hotels at the time, used to promote how classy they were as well as providing an advertising vehicle for local merchants. Kaaterskill notes that few of these pieces have survived because of their very limited run and large size. They know of only three other survivors. The Hoffman House was built in 1864 and was one of New York's finest. It was noted for its scandalous painting, "Nymphs and Satyrs," in the barroom. Women were allowed to peek at the painting with its nude nymphs in the men's-only bar once a week. Forty-two of the 46 photographs in the album are portraits of notable actresses of the time. They were photographed by Napoleon Sardony, who photographed virtually every famous actor and actress to hit the New York stage for decades. The other photographs include President Grover Cleveland, who was living at the hotel when he was elected to his second term. $10,000.

Item 86 is a manuscript appraisal for the estate of Blake B. Jones of Sumter County Alabama, who died in 1842. Jones owned a lot of farm holdings, such as horses, mules, furniture, and tools. His second most valuable holding was cotton, valued at $3,360. However, his most valuable possession was his slaves. Jones had 68 slaves, with values ranging from $100-$850. In total, their value was $27,065. At least, that is how they were valued by slave owners of the day. $450.