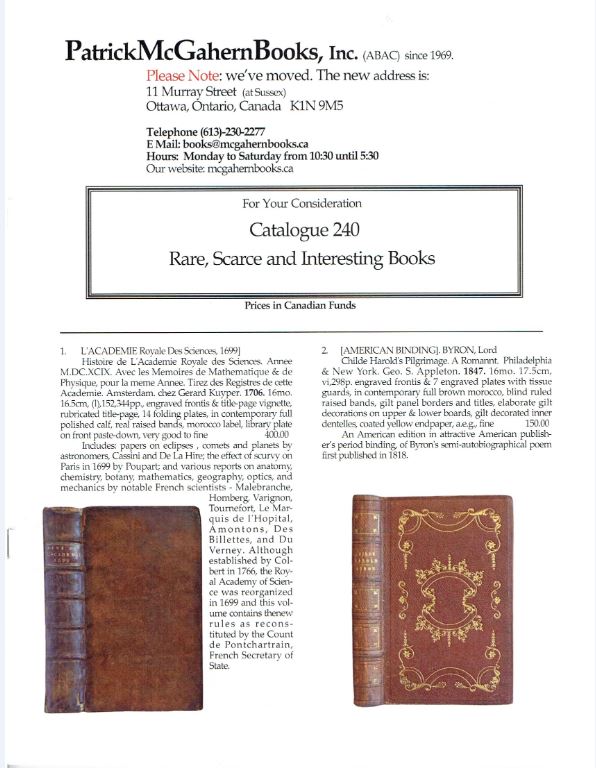 Patrick McGahern Books has issued their Catalogue 240 of Rare, Scarce and Interesting Books. As a Canadian bookseller, much of what is found here can be described as Canadiana, but it is certainly not exclusively so. Many items are connected to America, Europe, and Australia. We also note a substantial concentration of items from, or pertaining to, the 19th century. We will look at a few.

We begin with one of those American items, though barely so. It comes from a border town. You know, I've never heard Detroit described as a "border town," but surely it is. Item 3 is The History of Detroit and Michigan or the Metropolis Illustrated. This is a two-volume set, filled with plates and illustrations. It takes the city's history up to the late 19th century. This second edition of Silas Farmer's book was published in 1889. The city had almost 200 years of history behind it by then, though its years of greatest boom and bust still lay ahead at the time. Priced at CN $300 (Canadian dollars, or approximately $227 in U.S. currency).

We move from a stone's throw across the Detroit River from McGahern's Canadian home to a location thousands of miles away. Item 16 is The Malay Archipelago: The Land of the Orang-Utan, and the Bird of Paradise. A Narrative of Travel, with Studies of Man and Nature. The author was Alfred Russel Wallace. Wallace had begun visiting the archipelago in 1854 and noticed something that fascinated him. Species on different sides of the the archipelago had both similarities and differences with each other. The theory he devised to explain these similarities and differences was evolution. That would not be startling today, but this was before Darwin had published a word about the theory. Wallace had come up with essentially the same theory independently of Darwin. Indeed, when it was first announced to the public, prior to the publication of On The Origin of Species, it was in an article co-authored by Darwin and Wallace. Darwin may have received most of the credit, but it did not bother Wallace, who admired Darwin and spent his life bolstering his associate's theories. Wallace's first description of what he found on the Malay Archipelago was published in 1869, but this is not a first or even a second edition. Actually, it is a tenth, published in 1898. Nevertheless, it is an interesting copy. It contains a tipped-in, hand-written postcard from Wallace to Percy Taverner. Taverner, a Canadian ornithologist much younger than Wallace, had sent him his paper on the migration of the Auk. Wallace expresses his appreciation while noting that he does not believe instinct is the explanation. The book contains Taverner's bookplate with his name spelled, as it originally was, Tavernier. And, the postcard brings us full circle back to Detroit, as the postcard is addressed to him in that city. CN $500 (US $379).

Here is a story that begins in Canada, but ends half a world away: Notes on an Exile to Van Dieman's Land: combining incidents of the Canadian Rebellion in 1838... Also, an account of the horrible sufferings endured by ninety political prisoners during a residence of six years in that land of British slavery... Actually, author Linus Miller's journey began in America, as he was an American. However, he went north to serve with patriots in the ill-fated revolution in Upper Canada in 1838. The rebellion never gathered the level of support as the one that happened to the south a few decades earlier, and the British were soon able to put it down. Many of those who participated were rounded up, some, like Miller, tried and sentenced to death. However, executing the patriots might have stirred up more discontent, so he was shipped off to England, where he was retried and sentenced to transportation instead. Miller was sent to Van Dieman's Land, now better known as Tasmania, off the coast of continental Australia. He languished there for six years before being pardoned and allowed to return home. His is one of nine accounts by exiles from the Canadian Rebellion of their time in Australia. One of the rarest, Miller's account retells both his experiences in Canada and Australia, and describes the land Down Under. Item 64. CN $2,000 (US $1,518).

This next one is totally Canadian. It is a school project from 1930. It is a two-ring photo album headed Geography Book on Canada, Patricia Plant. Form Up.II-2-Trafalgar. The last part of that title is probably some sort of Canadian code Americans don't understand. Miss Plant must have been an upper grade school student at the Trafalgar School for Girls in Montreal, the oldest English language girls' school in Quebec. She has inserted over 150 illustrations, including clippings from magazines, photographs, and postcards. It also contains three hand-colored maps. All of Canada is covered, though about half of the images are from Quebec. McGahern has given Miss Plant an "A" on her project. Item 50. CN $150 (US $114).

We will connect Canada, America, and Britain with this item. Item 28 is Gardner Engleheart's Journal of the Progress of H.R.H. The Prince of Wales, through British North America; and His Visit to the United States, 10th July to 15th November, 1860. Engleheart was Secretary of State for the Colonies. In 1860, the 18-year-old Prince of Wales toured Canada and the United States. As the eldest son of Queen Victoria and Prince Albert, his entire life had been spent as the heir to the British throne. Young Albert Edward was not a great student, and somewhat of a disappointment to his mother, who did not let him participate in important matters of state. However, the young Prince was an outstanding people person. He was well-liked wherever he went, and his tour was extensive. It was a great diplomatic effort on behalf of his homeland. He opened Victoria Bridge in Montreal and laid the cornerstone in Ottawa's Parliament Hill. He visited Niagara Falls and went on to the U.S., spending three days at the White House with President James Buchanan. Albert Edward could relate to the current Prince of Wales, Prince Charles. His mother's reign lasted for 63 years. He had been Prince of Wales longer than any before him, almost 60 years, before finally ascending to the throne in 1901. He reigned as King Edward VII until his death in 1910. CN $1,500 (US $1,139).