Art and Beauty in Books from Marilyn Braiterman Rare Books 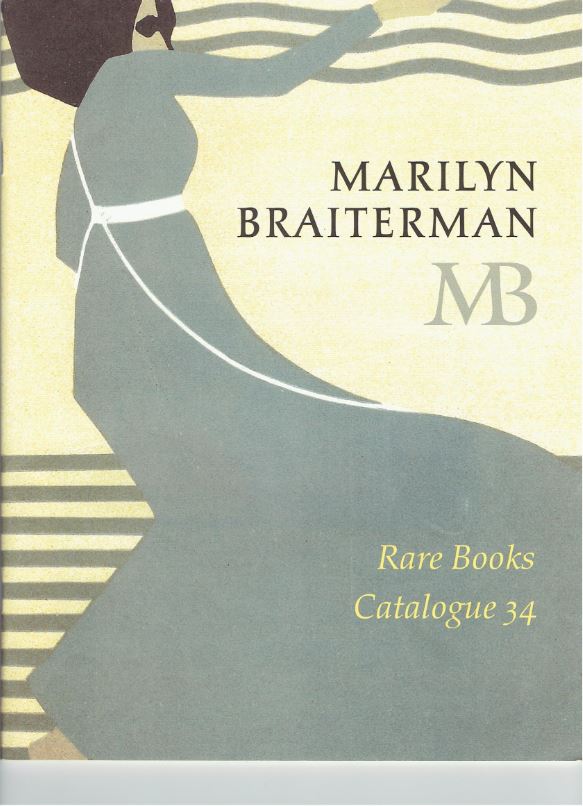 Marilyn Braiterman Rare Books has issued their Catalogue 34. It doesn't have a specific title or description, but here is what we found. The books and ephemeral items are all in some way artistic. For many, it's the quality of the illustrations and plates. Others feature the work of artists, or are representatives of the "book arts." There are even some advertising items, printed to create an air of luxury. While some items are American, many of the books are European in origin and a few are Japanese. Here are a few samples of these artistic works.

We begin with a trip back to old New Orleans, 1876 to be exact. Item 23 is a folio book of New Orleans Characters by Leon Frémaux. There are 16 "stunning plates," hand-colored, of various New Orleans street characters of the day. Among them are cotton and sugar merchants, a stockbroker selling fake stocks, a drummer beating incessantly to attract people to an auction, and vendors selling various foods and merchandise. It's a chance to see how much, or how little, people from New Orleans have changed. Priced at $11,000.

Perhaps some of those New Orleans characters might have enjoyed some of the scenes in this set of 12 double-page plates. They are circa 1882 images relating to the Bergner & Engel Brewing Company of Philadelphia. Long forgotten, B&E was the largest Philadelphia brewer of its day, and one of the biggest in America. It was the leading brewery in Philadelphia's famed Brewerytown, nine blocks filled with dozens of brewers. The images show the brewery, locomotives and horse drawn wagons carrying B&E beer, and their early refrigerated railroad car. It is said they had the first locomotive owned and operated by a brewery. Sadly, Bergner & Engel suffered the fate of so many brewers and distillers, including almost all of those in Brewerytown – Prohibition. They continued with near beer and such for awhile, while sneaking the real stuff out. However, authorities finally shut them down in 1928, and B&E was not able to make a comeback when Prohibition was repealed. Item 81. $1,500.

Of course, not all German immigrants to Philadelphia became brewers. John Weik came over around 1827 and worked as a bookseller and publisher (an important job, almost as much as being a brewer). Circa 1850's, he published the one and only edition of his book The Child's Own Album. Lovely Scenes of American Life. His illustrations come with captions in English and German. What is remarkable for its time is that it portrays white and black children playing together. Even a plantation scene shows mixed children without a hint of the black one being a slave. Item 73. $9,000.

Item 4 is an interesting French children's book circa 1860: L'Education de la Poupée (the education of a doll), by Jules-Jean-Antoine Baric. It is the story of a little girl who learns to correct her own behavior to earn a doll. When she gets the doll, she finds it has its own faults, being rude and lazy. She then has to educate the doll in the ways of proper children of the higher classes of French society. Along the way, Baric provides 15 hand-colored plates to illustrate the story. $1,750.

Item 10 is a bound complete set of Bradley: His Book, volume 1 number 1 through volume 2 number 4 (the last). It was published by Will H. Bradley and his Wayside Press in Springfield, Massachusetts, from May 1896 – February 1897. Bradley's reputation is as "the foremost American Art Nouveau designer of his time." His Book is filled with his illustrations and poster art, as well as those of other notables of the time – Beardsley, William Morris, Toulouse-Lautrec, Burne-Jones, and others. His illustrations also appear in the advertisements. Bradley sort of did everything in preparing His Book, while also providing art for The Echo, published from Chicago. The demands led to his having a breakdown at the age of 28, hence the end of his publication and the sale of his press. He settled into being a graphic designer for others, a long career as he lived to 94. $6,000.

Item 2 is a humorous book, The Gretna Green Bolt-A, or, Young Ladies' Man-ual. It was written by Arthur O'Bradley, illustrated in the manner of Henry Alken, published in 1853. Gretna Green was the first village in Scotland on the old London to Edinburgh coach route. As such, it was a stopping post for eloping English men and women. This book writes about manners and morals, and, in Breiterman's words, "must have been hilarious at the time." $2,000.