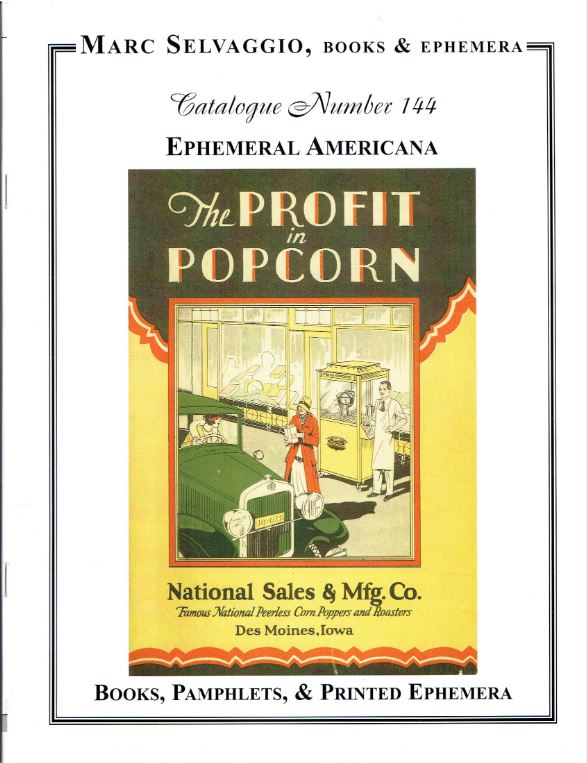 Marc Selvaggio, Books & Ephemera has issued a catalogue of Ephemeral Americana – Books, Pamphlets, & Printed Ephemera. This catalogue will be pure fun for those who love American history. No, there won't be too much about the cataclysmic historical events, the Revolution, Civil War, presidential assassinations and the like. However, floods and hurricanes do make the cut. Most items pertain to events in the lives of average Americans, shows, movies, trips, cars, airplanes, phony medicines and cures, education, music, products and advertising, sports, real estate, labor, and, as the cover of this catalogue attests, popcorn. What could be more American than popcorn? Here are a few of these ephemeral items.

These streets weren't exactly paved with gold. They were paved with wood. Wood paving has its obvious drawbacks. For one, it rots. Creosote was used to retard this problem, and while this increases its life, it also smells bad. Wood also pits, leading to uneven surfaces. What's more, it's slippery. On the positive side, it is quieter than stone and cheaper. It mostly disappeared in the automobile age, but was popular in the 19th century. A handful of wood streets still survive today. Item 201 is a circa 1910 publication by the American Association of Creosote Wood Paving Manufacturers: Wood Block Pavements in America. Where They Are, How They Look and How They Please Taxpayers, Drivers, City Authorities and the Citizens. Priced at $125.

Here's a perfect car for a wooden road, as rare and distinctive as wood pavement itself: The Tucker Motor Car. The First New Car in Fifty Years. You can learn more about this remarkable car and its equally remarkable inventor by checking out the 1988 movie about them. The car was way ahead of its time, but the Tucker Company ran into all kinds of troubles, technical, financial, and a trial which claimed Tucker's company was a fraud, created to defraud investors of their money, not actually build cars (Tucker and the others were acquitted). All told, only 50 cars were built (Tucker planned to build 60,000 per year). This undated promotional brochure, which must be from the late 1940's, speaks as if the car was already available, but Tucker had a tendency to sell things before they were made. Item 189. $125.

If you would rather have the total opposite of the revolutionary Tucker, nothing could be more pedestrian than this car: 40th Anniversary Checker. Comfort and Elegance are added to the Brawny Built-to-last Checker. Brawny, sure, elegant, hardly. This folding brochure would date from around 1960. After 40 years of building the classic Checker Cab, which rarely changed over its many years, Checker decided it needed new markets. It started selling to consumers. The consumer cars were little different from the taxis. The technology was outdated but practical, mileage poor (that didn't matter all that much to consumers prior to the 1970's oil crisis), the structure solid as a tank, ideal for driving hundreds of thousands of miles on city streets. The brochure claims "Everything about the car says Quality with a capital 'Q.'" That can be attributed to puffery. At best the quality was with a small "q." Consumer sales were never very good for this car that always looked and acted like it came from an earlier era, but Checker held on until 1982 when its last cars were built. Item 169. $65.

Here is that popcorn pamphlet displayed on the catalogue cover: The Profit in Popcorn, published in 1929 by the National Sales & Mfg. Co. They were selling popcorn machines, and as the image on the cover attests, wealthy ladies will stop their cars on the street to get out and buy a bag of popcorn. There were big bucks to be made in popcorn (and peanuts too). One owner from Texas made $2,388.96 in just the last 11 months, a lot of money in 1929. Of course, that year rings familiar. The popcorn vendors would soon be competing against apple sellers on the city streets. Item 165. $225.

You may not know the name of the Pantlind Hotel, nor think one of the grandest hotels in America would be found in Grand Rapids, Michigan, but such was the case in the 1920's. It's reputation as the leading furniture manufacturing city in America earned it the right to a great hotel. As such, the Pantlind went all out in this 1924 promotional brochure: See the Hotel Pantlind as it really is. Look thru the Macyscope. The name "macyscope" may be unfamiliar, but you would recognize one instantly. It's what we now call 3-D glasses, those glasses with one lens red and the other blue. The slightly shifted red and blue illustrations on the page appear to jump out in three dimensions when viewed through the glasses. The macyscope was a rage in the 1920's, and continues to pop up occasionally even today. As for the Hotel Pantlind, it kind of ran down over the years, but in 1982 was purchased by Amway, and has since been restored its old glory, along with the addition of a 29-story glass tower. It is now known as the Amway Grand Plaza Hotel. Item 43. $150.

Here's some furniture that was not made in "Furniture City." Instead, it was made in Joliet, Illinois, at the Illinois State Penitentiary. Item 163 is the Illinois Board of Prison Industries. Illustrated Descriptive Catalogue, a second edition circa 1908. It comes with a price list, order form, and a couple of sales letters. The furniture is described as "made to endure. It is durable, sanitary, attractive and noiseless." Sanitary and noiseless might seem somewhat odd attributes for furniture, until you recognize the target market. The furniture was desks, chairs, bookcases and such with the primary audience being schools. $300.

Once in awhile, a person comes along with a perfectly descriptive name, like Mr. Shoemaker for a cobbler, Ms. Cook for a chef. Item 242 is Dr. Crook's Wine of Tar Alphabet. This is an alphabet book (1883?) that promotes this miraculous cure that used pine tar and various vegetable products to "cure" diseases from coughs to consumption. Dr. Crook cautions customers not to be fooled by ineffective imitations that won't restore your health. Heck, people who make things like that are.... crooks. $85.

Here is a 1913 item that is sure to bring a smile, or look of pain, to your face: The What, The Why, and the Way of Internal Baths, published by Tyrell's Hygienic Institute. An "internal bath" is not a mouth wash. No ma'am. Professor, later Dr. Charles Tyrell was hawking the "celebrated J. B. L. Cascade." For the record, "J. B. L." stands for joy, beauty and life. It consisted of a nozzle on a five-quart rubberized canvas bag. You sat on the nozzle, pants off, naturally, and the pressure of sitting on the bag forced the fluid in the bag up the nozzle, to where we will not mention. Who knew we could hold five quarts? Not for long, though, so better do this in the bathroom. The American Medical Association way back in the teens declared this quackery, but apparently these things are still available today. I'm not sure whether new ones are still being manufactured or if you have to buy them........ used. Item 221. $85.