Something Affordable for Everyone from Peter L. Masi Books 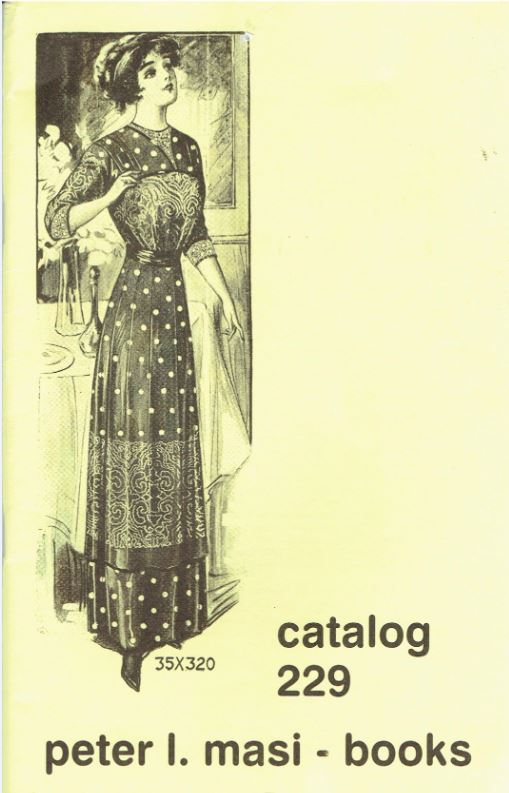 A variety of material.

Peter L. Masi – Books has issued Catalogue 229. These items won't break your bank account. Most everything is priced in double digits, and what isn't is more likely to be priced in fewer, not more. What can you get for so little? The answer is a fascinating collection of obscure, interesting (okay, occasionally boring) glimpses of yesterday. There will be pieces that fit in all kinds of collections, other than those that require everything cost a fortune. Subjects are too varied to try to describe for these 567 pieces. The 19th and early 20th centuries predominate, though there is some more recent material. You will find everything from medicine to "medicine," sports, cooking, religion, Americana, various American states, advertising, travel and tourism, books about books, architecture, the list goes on and on. This is definitely a something for everyone collection. Here are a few samples.

Would you like to be a phrenologist? You can learn from this booklet: The Illustrated Self-Instructor in Phrenology and Physiology. Phrenology was a pseudoscience popular in the 19th century. It believed (correctly) that different functions were controlled in different parts of the brain. However, it then concluded (incorrectly) that personalities and different mental attributes of a person could be determined by measuring the size of the skull over the related portions of the brain. A phrenologist would examine and measure an individual's skull and from this reach conclusions about his mental state. Perhaps the most notable of American phrenologists were brothers Orson Squire and Lorenzo Niles Fowler. They wrote numerous books and pamphlets on the subject, including this one, published in 1857. In addition to writing, the Fowlers did many phrenological readings (for a fee), and a website on the subject (I cannot vouch for this) says Lorenzo read the heads of Mark Twain, Walt Whitman, and Clara Barton. If so, Twain and the others should have had their heads examined. There is a shortage of phrenologists today, so if you would like to fill the void, this book (item 448), with diagrams and illustrations of many head shapes, will teach you how for a mere $50.

The Marquis de Lafayette, though a Frenchman, was one of the greatest heroes of the American Revolution. He helped arrange financing in his home country, and came to America to lead American troops. He was one of the most beloved of figures in America, though he soon returned home, and but for one return visit in 1824, spent the remainder of his life in France. He was never forgotten here. When he died in 1834, he was the last survivor of the leaders of the Revolution, but a stirring Oration on the Life and Character of Gilbert Motier de Lafayette was given in Congress by the son of founder John Adams, former President and now Congressman John Quincy Adams. His speech was given on December 31, 1834, and published in 1835. Item 21. $10.

A tribute to Lafayette by John Quincy Adams is not unexpected, but how about this one: The Time of the End; a Series of Prophetic Bible Studies upon The End of this Present Age and Events & Dates Approximately Arranged, by John Quincy Adams. What's going on here? Did John Q. need the services of a good phrenologist? It turns out this was not written by the sixth President after all. The 1924 publication date of this tract from The Prophetical Society of Dallas gives this away. The Prophetical Society believed the world would end in 1931, which was off by at least 84 years, hopefully a great many more. As for the author, it was Rev. John Quincy Adams, not President J.Q.A., and here is a caution if you hope to learn more about him. There have been at least 3 or 4 Reverends John Quincy Adams over the years. It will not be easy to keep them straight. Item 465. $35.

Item 528 offers a fantastic adventure for tourists from Boston in 1881: Grand Excursion to Colorado & California: A Forty-four Days' Trip (April 18 to June 1, 1881), for Only Four Hundred Dollars, Traveling & Hotel Expenses Included. That sounds like a fabulous deal, but $400 would have consumed a year's wages for most workers in 1881. This would have targeted Boston's Brahmins. The tour actually hit more stops than Colorado, where it visited mines and scenic locations, and California, with San Francisco, Yosemite, and "big tree groves." Along the way, they made stops in Chicago and Salt Lake City. Tourists rode the rails in "palace cars," and extended carriages chauffeured them around various cities. "Every arrangement is first class." $35.

It wouldn't be that much longer before people would be designing their own tours. The auto age was just around the corner. If you wanted to drive from Boston to California in 1916, this is the road you would have taken: The Complete Official Road Guide of the Lincoln Highway. It was published by the Lincoln Highway Association, created in 1913 to promote the use of this road. It includes a folding map, advertisements for hotels and garages along the way, and a lined section for notes. Four pages of penciled notes from a 1917 trip have been entered there. The Lincoln Highway was not a new construction, but a route cobbled together from existing roadways, only half of which were paved, with many, particularly in the west, in deplorable shape. Mud and ruts made travel next to impossible at times. Many years later, President Eisenhower would begin the construction of the interstate highway system, his inspiration for the new roadways being a trip in 1919 as part of an army convoy across the miserable conditions of the Lincoln Highway. Item 107. $75.

Here is an unusual but inexpensive item for collectors of muckraker Upton Sinclair. He is best known for his 1906 classic, The Jungle, where he exposed unsanitary conditions in the meatpacking industry. However, it was not his intention to expose how unsafe the food was. What he intended to expose was how bad the working conditions were for those employed in the industry. Sinclair fought for the poor and downtrodden all of his life. In 1934, he decided to run for Governor of California. He received the nomination of the Democratic Party. Item 333 is Epic Answers: How to End Poverty in California. It was published in 1934 as part of his campaign. Sinclair received 879,000 votes, but his Republican opponent got about a quarter of a million more. So, there is still poverty in California. $50.