Travels & the American Scene from the William Reese Company 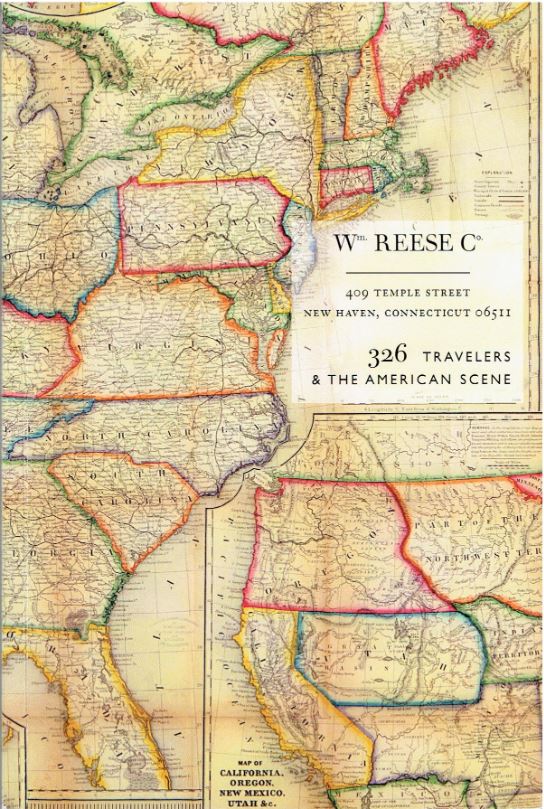 The William Reese Company has issued their Catalogue 326, Travelers & the American Scene. Most items herein combine both of these subjects. They concern travels in America. However, there are a few that describe travels elsewhere in the world, while some items cover goings on not involving travel on the American scene. Still, this is mostly a collection of both, and anyone with an interest in important Americana will appreciate this catalogue. It is filled with major accounts. Here are a few.

We start with one of the earliest accounts of settlement in part of what is now the United States. Where better to retire to than Florida? A group of French Huguenots attempted to settle in northern Florida in 1564. They were under the leadership of Jean Ribault and Rene Laudonniere. Accompanying them on the journey was Jacques Le Moyne, who was the official artist and cartographer. He sketched many scenes, including botanical specimens and scenery. However, what was most notable was his drawings of natives, principally the Timucua Indians. He also created an excellent map of Florida. The French settlers would later move north to today's South Carolina before returning to Florida. Their situation soon deteriorated. Relations went downhill with the Indians, and then the Spanish in St. Augustine, wary of French competition, slaughtered most of the settlers. Le Moyne was one of the survivors who manged to escape and make their way back home. Le Moyne's illustrations would later be picked up by Theodor De Bry, who used them in his Brevis narratio eorum quae in Florida Americae provincia Gallis acciderunt... This is the second Latin edition, published in 1591. For many, this book provided the first eyewitness images of America's natives. Item 89. Priced at $75,000.

Skipping ahead two and one-half centuries, America east of the Mississippi was fairly well understood, but to the west vast territories were essentially unknown. First, Lewis and Clark were sent to explore the Northwest, and then Zebulon Pike was sent, first to find the source of the Mississippi, and then to investigate the Southwest. He didn't find the source of the Mississippi, and got somewhat lost in the west, but he provided the first extensive look at the southern part of the Louisiana Purchase. Item 119 is Pike's An Account of Expeditions to the Sources of the Mississippi, and through the Western Parts of Louisiana...published in 1810. This copy was owned by, and carries the bookplate of, DeWitt Clinton. Clinton was the nephew of Vice-President George Clinton. DeWitt served as Mayor of New York City, Governor of and Senator from New York, and was the runner-up to James Madison in the 1812 presidential election. DeWitt Clinton is one of the most important figures in New York State history. He was the governor responsible for the building of the Erie Canal, which reduced shipping costs of goods and produce from the west by 90%. It opened much what was then the West for settlement, built communities along the canal in New York, and made New York City (the terminus of the canal and river system) into the giant of commerce it is today. $18,500.

This next man also did some traveling in America, but his trip was very unpleasant. He lays out his experiences in A State of the Expedition from Canada, as Laid Out before the House of Commons, by Lieutenant-General Burgoyne... L-G John Burgoyne was the British commander who led his troops from Quebec into upstate New York in 1777. The plan was to reach the Hudson River, creating a barrier that would divide New England from the southern states. This would disrupt the ability of ungrateful, rebellious colonists to coordinate their actions, making it virtually impossible for the Revolution to succeed. He got as far as Saratoga. American forces overwhelmed those of Burgoyne, who was forced to surrender. It was a fantastic morale booster for the revolutionaries who had tough days ahead, and helped them secure foreign aid. Meanwhile, the folks back home in England were not pleased. This account by Burgoyne, published in 1780, was designed to show the defeat was not his fault, but the fault of those above him who did not provide sufficient manpower to defeat his opponent. Item 17. $6,000.

Burgoyne wasn't the only Englishman to have an unhappy time in America. Charles William Janson spent 12 years, 1793-1805, in America. Rather than being a defeated soldier, Janson was just a whiner. He evidently sought to make his fortune, but lost more than he gained. He returned to England, in the words of Howes, "with ill-concealed bitterness." Sabin, quoting the Monthly Review, writes, "He went to America with high expectations, engaged in several speculations, all of which failed, and after thirteen years’ absence, returned to England, where, as many others have done since, he vented his spleen in writing a book." In 1807, Janson published The Stranger in America: Containing Observations made during a Long Residence in that Country... Along with his commentary, Janson's book contains nine plates of scenes in America. While the book itself is not uncommon, this is the rare issue with the colored plates, most copies having them in sepia. Item 73. $6,000.

Item 48 is one of those stories loosely, barely based on a real event: Seizure of the Ship Industry, by a Conspiracy, and the Subsequent Sufferings of Capt. James Fox and His Companions; Their Captivity Among the Esquimaux Indians in North America; and the Miraculous Escape of the Captain... This is sort of an Eskimo captivity. Supposedly, Capt. Fox and six others were set to sea after a mutiny. Reaching an island, they were enslaved by local Eskimo until managing their "miraculous" escape. This is one of London publisher Thomas Tegg's chapbooks, meant to be more sensational than accurate. Reese notes that the plate of an Indian war dance shows the natives way too scantily clad for Eskimos. $1,000.