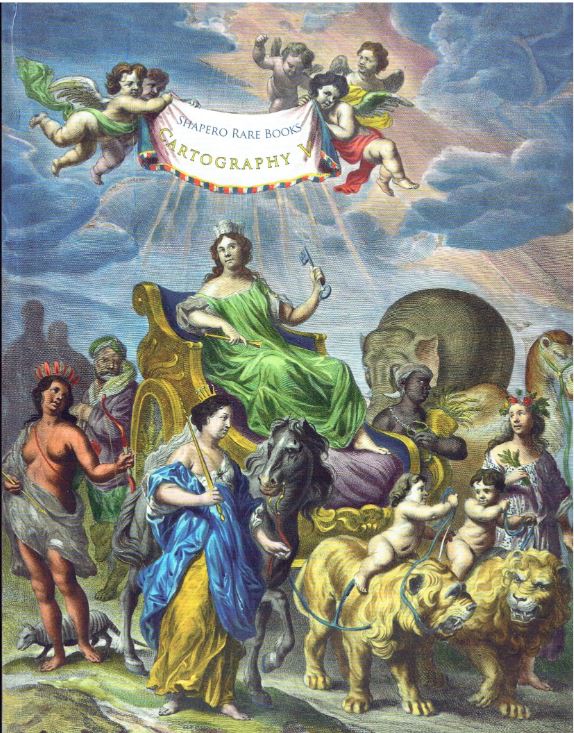 Shapero Rare Books has issued their catalogue Cartography V. That is "V" as in their fifth catalogue devoted to maps. Along with individual maps, it contains atlases, city plans, sea charts, celestial charts, and a few ephemeral items, such as letter openers with maps printed on their sides. For those seeking all things directional, this is a fine catalogue. These are a few of the maps offered.

We will begin with a map that shows the world as it was known a century after the opening of the Age of Discovery. It displays what was known – the New World, the African continent, and with Asia now fairly accurate. On the other hand, much was still unknown or misunderstood. North America is as large as Asia, all but its eastern coast a mystery. South America has its general shape, but none of its detail. Item 8 is Abraham Ortelius' Typus Orbis Universalis, from his world atlas. This is the world map, a 1601 printing of a map dated 1587. The most notable of its incorrect features is the massive southern continent, believed to exist until the 1770's when James Cook sailed deep into where it should be without spotting land. The map also shows a channel running all along the northern border of Canada, separating it from the Arctic ice cap – the Northwest Passage. It provided hope for generations of explorers to search, and often lose their lives, trying to find this short route to the Orient. Priced at £5,500 (British pounds, or approximately $8,371 in U.S. dollars).

Ortelius produced what is considered the first modern atlas. Here is the greatest of them all, the pinnacle of the great Dutch atlases of the 17th century. Item 13 is a complete copy of the Atlas Major produced by Joan (Johannes) Blaeu. Offered is the first Latin edition, published 1662-1665 in Amsterdam. It is a massive collection of spectacular maps, 594 of them in 11 volumes, hand colored. This was an era of great map making, and the house of Hondius and Jansson had produced wonderful atlases leading the way in the first half of the 17th century, in competition with Joan Blaeu's father, Willem. What the younger Blaeu produced after his father died was beyond anything else. It was the largest and most expensive book published during the century. Among its maps are 58 devoted to England and 25 to the Americas. Separate maps of Virginia and New England are provided, but the continent's west coast becomes blank in the northwest, reflecting the lack of knowledge then. Blaeu also displayed California in accordance with an error that lasted a century. California is shown as an island. Australia, then New Holland, is shown, at least its western half, but fades away to the east, which was also unknown at the time. £500,000 (US $761,282).

Much of what was seen on these early maps was fictional, but they were an attempt to be accurate. This next map is pure fiction, meant for amusement. Circa 1730, by Mattheus Seutter, it is Representation Symbolique et ingenieuse projettée en Siege et en Bombardement, comme il faut empecher prudemment les attaques de L'Amour. This is a battle map, so to speak. However, the fortress is a man's heart, whose soldiers try to fend off the attacks of a woman. The moat surrounding his heart is labeled the Frozen Sea without Passion. Perhaps the woman might be better off finding a warmer heart to pursue. Mattheus Seutter, of Augsburg, was a prolific map maker in his day. He created maps of both real and imaginary lands. His real maps were not notably creative, as he mostly copied others' works. However, some of these imaginary ones showed a bit more spark. Item 33. £2,950 (US $4,495).

Item 56 is a Map of America from 1804 from British map maker Aaron Arrowsmith. It shows both North and South America. It came at a critical time in U.S. history as America was about to double its size with the Louisiana Purchase. The map itself is from 1803 and predated the Purchase, and even the transfer of that land from Spain to France which occurred slightly before the sale to America. The result is the U.S. is confined to an area with Canada its northern border, Florida (then Spanish territory) its southern border, and the Mississippi River the western border. Britain controls Canada, while most of the land west of the Mississippi is Spanish, attached to Mexico. However, a rather vague border lies between Britain and Spain for what became America's Pacific Northwest as it was unclear whose land that was. The most notable feature within this area is the Rocky Mountains, which are shown ranging from the Mexican border to the Mackenzie River in Canada. There is more detail in Canada, where Arrowsmith had access to records of Alexander Mackenzie's journeys to the Arctic and Pacific Oceans. The map predates Lewis and Clark's Expedition, leaving the west between Canada and Mexico virtually unknown. £3,000 (US $4,570).

Item 57 is Arrowsmith's more targeted A Map of the United States of North America... It is dated 1796, though it includes updates circa 1808. Still, based on its earlier creation, while it has added the names of Ohio and Michigan, it only shows the eastern portion of the Louisiana Territory, as that was not yet part of the U.S. in 1796. This large map consists of four sheets joined together. £9,500 (US $14,468).