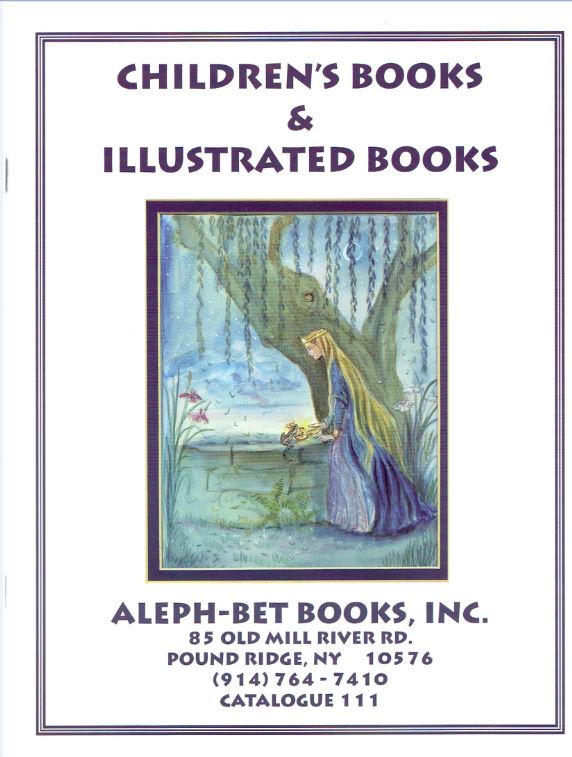 Aleph-Bet Books recently released their Catalogue 111 of Children's Books & Illustrated Books. This catalogue is filled with items of wonder and amazement. From Seuss to Sendak, Disney to Dahl (and dolls), there are picture books here to fill the imagination of generations of young people. Then again, there is the dark side – Nazi, Fascist, Communist propaganda, the worst designed to fill young minds with hate. Other books are demeaning to certain groups of people if not downright racist. The books we presented our children tell more about us than them. Here are a few, good and bad.

No one was ever better at constructing strange worlds from illogical logic than Lewis Carroll (actual name Charles Lutwidge Dodgson). Item 75 is a first edition of his 1869 Phantasmagoria and Other Poems. It is inscribed to his sister, Mary Dodgson. As usual, he got around the Carroll/Dodgson issue by inscribing it "with the author's love," though one would think he could have used his actual name with her. His diary indicates he sent out 28 copies to family and friends on January 7, 1869, this likely being one. Dodgson and his sister were close. She married just a few months after Phantasmagoria was published, and her son, Stuart, wrote the first biography of Carroll, published in 1898 (the year he died). Priced at $7,500.

Racial stereotypes could still be brutal back in 1946, with versions of the old "Ten Little..." depictions of black children still being published. This one is a surprise: Corky's Pet Parade, by Maggi Fiedler. It is the story of Corky, a black boy, and his pet chicken. Corky goes out to a playground where he befriends white and other races of children, while his pet chicken, Beulah, wins the pet contest. I'm not sure which of these was less likely in 1946, but this book was well suited to help teach tolerance and equality to a nation still years away from the court decision desegregating its schools. Item 47. $200.

Not all was so uplifting in the 1940's. It was a time of the worst of the worst. Item 234 is a poster published in 1940 for use in German schools by the Teacher's Association of the Reich Government. The heading is Die Juden in Der Welt (the Jews in the world). It is filled with anti-Semitic rantings, photos, and illustrations, designed to instill hatred in children. The writing came from the pen of Johann von Leers, a member of the SS who was hired by Goebbels to write for the propaganda ministry. $1,850.

Here is a much better item for children from that same year of 1940. It is Christmas, a story by First Lady Eleanor Roosevelt. There wasn't much of anything Mrs. Roosevelt didn't try to do to make the world better. Here, she tells the story of a Dutch girl living in her homeland that has been conquered by the Nazis, her father killed in the war. Mrs. Roosevelt felt we needed to be honest with children about what is happening in the world. At the same time, she presented a message of love and hope to encourage children to provide light to the world in even the darkest times. The illustrations were provided by German artist Fritz Kredel, who fled from the horrors of his homeland in 1938. This copy was inscribed by Mrs. Roosevelt. Item 396. $2,850.

This book should help straighten out the children: Dr. Watts's Plain and Easy Catechisms for Children and Preservative from the Sins and Follies of Childhood Youth. The 1797 book includes some explanations and prayers to help steer youth from their sinful and foolish ways. Dr. Watts explains the work is intended "to furnish some introductory easy and concise forms of knowledge...upon the minds of children in a way more suited to their feeble capacities." I always thought it was bad form to insult your customers. Item 141. $1,200.

Harry Frees showed more respect for his cats than Dr. Watts did for children, or at least he so claimed. Item 338 is Frees' photo illustrated book, The Pot of Gold at Rainbow's End. It is the story of Tommy Toddles, a naughty kitten who gets into all kinds of trouble. The photographs consist of pictures of cats dressed up as humans and posed to illustrate various behaviors. This was 1932, so Frees actually had to dress up and pose his cats, this being the pre-Photoshop era. However, Frees reassures us that his subjects were all treated with the utmost respect. $250.

From the doctor we go to the doctor's wife. Item 41 is Do You Know What I'm Going to Do Next Saturday? published in 1963. This book also used photographs to display what the boy its subject plans to do next Saturday. The writer was Helen Palmer, who was the wife of everyone's favorite "doctor," Dr. Seuss. $125.

Speaking of the good doctor, we conclude with a book that isn't for children at all. This is a Seuss book for adults. Good thing, because we all want to read Dr. Seuss, but can't find an excuse to do so once our children have grown. Item 416 is Seuss' You're Only Old Once! This is a first edition, one of 500 copies signed by Seuss. It was released when he was 82 years old. Seuss (actual name Theodore Geisel), suffering the infirmities of old age, was forced to spend way too much time in hospital waiting rooms. He didn't much enjoy it. Seuss began sketching the machines he saw and various hospital procedures, adding his Seussian touch to the illustrations. He must have been the only beloved doctor with the patients in those hospitals. $650.