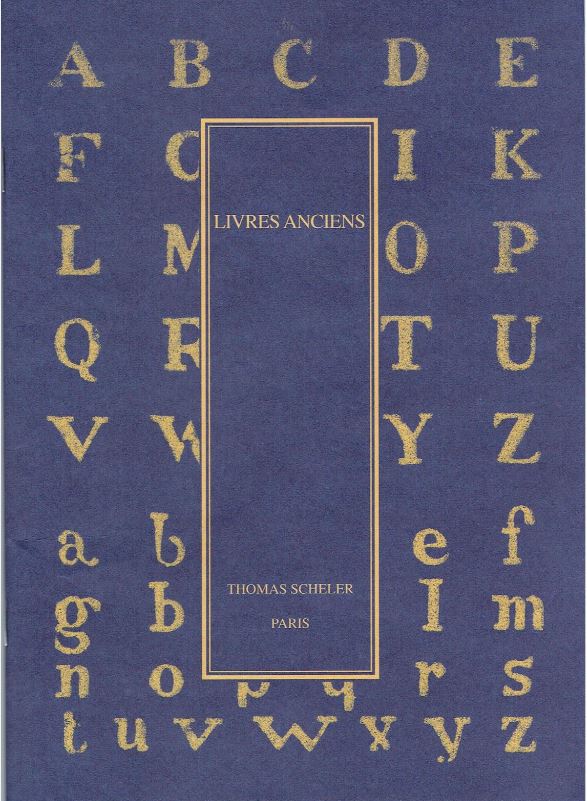 Librairie Thomas-Scheler has issued number 45 in their Hors Série (occasional) of Livres Anciens (antiquarian books). Obviously, this catalogue is written in French, though there are some books in English and other languages offered. It presents a selection of varied material, though we note a concentration of works in science, medicine, mathematics, and travel. And, as the title says, these are older works, though a few sneak into the 20th century. Here are some examples of what you will find.

We start with the announcement of an early discovery pertaining to radiation by the pioneers in the field, Marie and Pierre Curie. Item 49 is Sur une substance nouvelle radio-active, contenue dans la pechblende (about a new radioactive substance found in pitchblende). Pitchblende is a mineral that was already known to contain radioactive uranium at the time of this publication in 1898. In 1896, Henri Becquerel determined that uranium's radiation was not like phosphorescence, absorbed light being retransmitted, but something emitted by the substance itself. In measuring radiation from the pitchblende, Marie Curie realized that something was radiating at four times the rate of uranium. She concluded that this was a new element also contained in pitchblende, which she named "polonium," after her native country of Poland. The Curies would win a Nobel Prize in 1903 for their work, and Marie would win another in 1911 after Pierre had died. Priced at €1,300 (euros, or roughly $1,457 in U.S. dollars).

The Curies did not receive their first Nobel Prize alone. They shared the 1903 Nobel Prize for Physics with the aforementioned Henri Becquerel. Becquerel was an expert on phosphorescence and first believed that was the explanation for the rays emitted by uranium. However, with further studies he came to the groundbreaking conclusion that led to his share of the prize, that the radiation was being given off spontaneously. In 1903, he published a complete account of his various studies concerning radioactivity in his book, Recherches sur une propriété de la matiere, activité radiante spontanée ou radioactivité de la matiere. Item 15. €2,000 (US $2,241).

Joseph-Aignan Sigaud de Lafond was learned in many subjects. He at various times studied, tutored, taught and wrote many books on various fields, including science, mathematics, medicine, and theology. He is not well known as he was generally not a pioneer in his studies. His books were written primarily for the learned amateur rather than the fellow scientist. His experiments tended to delve into things that were somewhat magical at the time, though his work was serious. He studied electricity, and some attribute the invention of the glass insulator to him (this attribution is disputed). His investigations with aeriform fluids (gasses), or "airs," led him to experiment burning hydrogen gas. He put a plate over the fire to condense the fluid produced by the combustion and discovered it was ordinary water. It was a major discovery, though Signaud de Lafond did not appreciate its significance at the time. That would come with Lavoisier's discoveries regarding combustion. Item 169 is Sigaud de Lafond's 1779 account of his experiments with "airs," Essai sur les difféentes especes d'Air... €1,000 (US $1,121).

Tiberio Cavallo is another not well-known scientist of the era. He came to England from Italy, where he did some commercial painting and reputedly developed some sort of machine (camera obscura?) from which to draw silhouettes. However, he became interested in electricity and conducted many experiments with it. If he didn't make any major discoveries himself, he did develop equipment that would be used by other, more notable scientists, including an electricity amplifier that made it easier to measure currents. Cavallo also wrote about the subjects to assist others, and earned much praise from the Royal Society for his work. Item 37 is A complete treatise on Electricity, in theory and practice; with original experiments, published in 1782. €650 (US $729).

Item 165 is Discours des causes et effects admirables des Tremblemens de terre: contenant plusieurs raisons & opinions des Philosophes. It is a book about earthquakes, including opinions as to their causes. It covers recorded earthquakes from ancient times to the present, which in this case was 1580. That was the year of the 1580 Dover Straits Earthquake, which would explain the interest in the subject at that moment. While its exact center is unknown, studies conducted at the time of the building of the "Chunnel" indicate it was either in the straits or slightly south of Calais. It was one of the strongest ever experienced in this area of the world that is relatively free of seismic activity. It was felt from London to Paris, resulting in property damage and a few deaths. Some attributed the quake to the Devil, or as religious punishment for various wrongs, such as the English theater, especially since its timing was right around Easter. €1,800 (US $2,020).