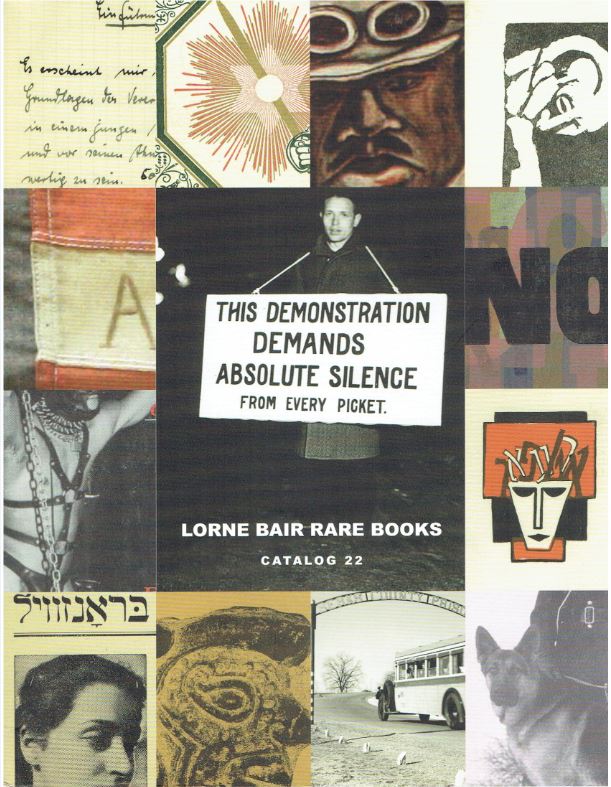 Lorne Bair Rare Books recently published their Catalog 22. To quote Bair's description, along with some unusual items, it contains "our usual assortment of Communists, Peaceniks, Wobblies, Utopians, Panthers, Free Lovers, and much more." The material ranges from the socialists, communists, and anarchists of the left-wing union movement of the late 19th century to the radical elements of the civil rights movement of the second half of the 20th century. And, from all times, there are the free lovers, who at times spoke more freely than at others. This material is fascinating, often entertaining from hindsight. These writers so often understood the problems, even if they struggled to find a workable answer. Here are a few examples.

Before there was Bernie Sanders, there was Eugene V. Debs. He ran for President as a socialist five times, reaching a high of 6% of the vote in 1912. The last time he ran from prison, having been sentenced for his determined opposition to participation in World War I. In 1901, several socialist and union groups came together to form the Socialist Party of the United States of America. Three years later, they held their first convention. Item 72 is a large photograph of 212 delegates at this first convention. A number was etched into the negative next to each person, and a printed, numbered list of their names is on the paper which serves as the backing for the photograph. An inserted, slightly larger photograph includes a few notable members, and right in the middle is their longtime standard bearer Eugene V. Debs. Priced at $4,500.

Debs was never elected to any political office after he switched from the Democratic to the Socialist Party. However, here is a man who was elected to the New York City Council as a Communist. Benjamin Davis grew up in the South, and became radicalized by the conviction of black, labor organizer and Communist Angelo Herndon. Later moving to New York, Davis was elected to the city council in 1943 representing Harlem. He remained in office until 1949, when he was expelled after being convicted of attempting to overthrow the government. While in 1943, when the U.S. was allied with the Soviet Union during the Second World War, it was possible to get away with being a Communist, the Red Scare era that followed doomed Davis' political career. He served over three years in prison, and while never returning to public office, he was able to speak at several college campuses in the 1960's. Item 13 is a collection of material primarily from Davis' political career, including photographs, campaign material, and other items almost entirely from the time prior to his arrest. $1,800.

Next we have an enormous archive of material pertaining to the subject of what was likely America's most notorious death penalty case. It generated enormous opposition to the death penalty, not only in the U.S. but across the globe. Opponents to the execution of Caryl Chessman ranged from Eleanor Roosevelt to Billy Graham. Even such conservative stalwarts as William F. Buckley spoke against his execution. It was all in vain. Chessman was executed on May 2, 1960. Chessman was a petty criminal in Los Angeles when he went on a crime spree that included several hold ups and a couple of rapes. That was the charge and conviction, though Chessman maintained he was a victim of mistaken identity and a coerced "confession." Several factors led to his becoming a cause célèbre. First, Chessman didn't kill anyone. He was one of the last people executed in America for a non-capital crime. The crime for which he was executed involved kidnapping, the prosecution using the creative claim that dragging his rape victim to the side was a kidnapping. Then, Chessman turned out to be surprisingly intelligent, authoring four books in prison (one was made into a movie) and preparing numerous legal appeals. The result was his case dragged on for years. By the time he was executed, the statute under which he was convicted had been repealed. While today death sentence appeals routinely go on for years and years, this was not the case in the 1950's, the 12 years between his conviction and execution being a record, which allowed for the clamor of public appeals to spare his life to build up repeatedly as new execution dates were set. Reportedly, the California Supreme Court attempted to stay the last date but the message did not reach the prison in time.

This archive comes from the estate of Joseph E. Longstreth, who was Chessman's literary agent and became a very close personal friend. It includes several unpublished books and stories written by Chessman in prison along with material concerning his four published works. There are also typed legal appeals and 2,100 letters, either from Chessman or concerning his case. Item 39. $50,000.

Item 94 is a 1917 book edited by James Waldo Fawcett, Jailed for Birth Control: The Trial of William Sanger, September 10, 1915. William Sanger isn't well known, but his wife still is. She was the pioneer in birth control and women's reproductive rights advocate Margaret Sanger. She created the term "birth control," published pamphlets on it for which she was sent to prison, and later formed the precursor to Planned Parenthood, which amazingly enough, is still controversial today. Oddly, it was her husband, William, who went to jail first. Margaret fled New York for England after being arrested. William was then tricked by an agent pretending to be a poor man with a large family into giving him one of his wife's "obscene" booklets. He ended up going to jail first. William and Margaret had a difficult marriage. He was a radical and Bohemian who introduced her to like-minded friends. She became sympathetic to their ideals, with her attention then turning to women's rights. In the day, women were generally expected to produce babies and not do much else but housework. She saw birth control as essential to women's ability to control their own lives. While William supported his wife's movement wholeheartedly, and went to jail for it, he really wanted her to be more domestic in their own lives, which she was not. The troubled marriage ended in divorce in 1921. $200.