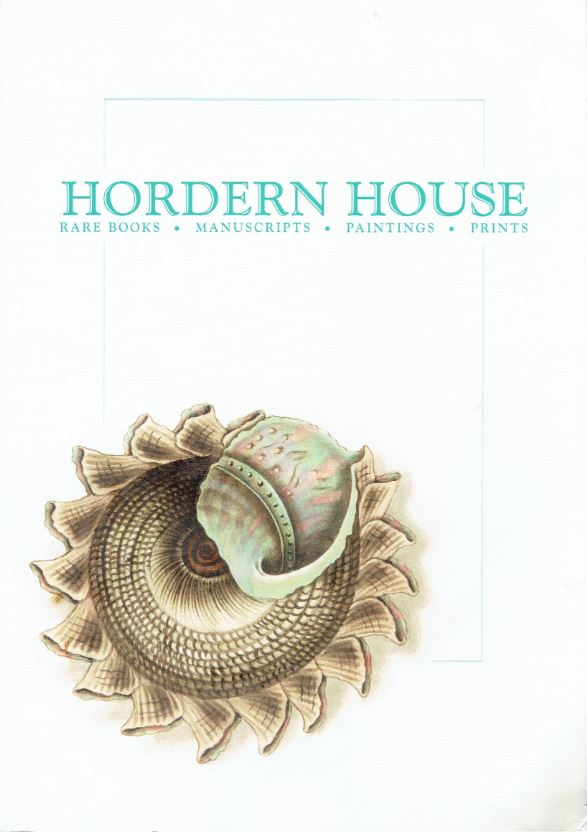 We recently received the latest catalogue from Hordern House, and despite a thorough search, I can find no title, not even a number for it. There is no description either. It just proceeds directly to the 38 items offered. We shall do the same, except to note it primarily covers Pacific voyages, mostly real, a few imaginary, with most related in some way to their home base in Australia.

We start with some of the first books about Australia, though they weren't about Australia at all. They were about imaginary lands way down under, the great (but non-existent) southern continent, or Terra Australis. Item 17 is The Discovery of a New World... by Joseph Hall, the first edition, first issue, of the first book in English to imagine a society on the southern continent. It was published in 1609. At the time, it was believed there must be a massive, unknown continent emanating from the South Pole to balance all of the continents in the Northern Hemisphere. Hall wryly observes that maps show this "unknowne Southern Continent," but if it is truly unknown, how can they display it on maps? "How long shall wee continue to bee ignorant in that which wee professe to have knowledge of?" Makes sense to me. So Hall went forth to describe it. It consists of four major regions, Tenterbelly – land of gluttons, Theevigen – land of thieves, Fooliana – land of snobs, and Sheelandt – land of women. In Tenterbelly, birds are too fat to fly. In Sheelandt (not so much a feminist ideal but a man's stereotype of women), all the women talk at the same time, but "none doth give ear, but each one yells as if she were horn-mad..." Priced at AU $44,500 (Australian dollars, or approximately $31,478 in U.S. dollars).

Australia was still essentially unknown when Gabriel de Foigny published A New Discovery of Terra Incognita Australis, or the Southern World... in 1693. That did not stop him from describing it, though his was more of Utopian society than that of Hall. It consisted of large hermaphrodites who lived in harmony with each other. Fortunately, the visitor himself is hermaphroditic, so he is accepted into the society. Interestingly, de Poigny, a Franciscan monk, was relieved of his duties for licentious behavior and fled to Protestant Geneva. His book is notable for being the first to use the term "Australia" to describe the land and "Australians" to describe its inhabitants. Item 13. AU $48,000 (US $33,973).

Of all the strange tales of the southern land, this one is the most bizarre: Le Relationi Universali... by Giovanni Botero, this edition being from 1622-23. It includes images of creatures to be found there, with no distinction between those based on reality and those on fantasy. Those based on fantasy are truly fantastic, requiring an imagination deeper than displayed in the martians and other space beings depicted in typical science fiction. These were not just people with big heads and big eyes. There is the winged being whose human-like face is where we expect the chest to be, with a serpentine head extending from the neck above. Another has developed a foot which is used to shade himself from the hot summer sun. Australians are an odd lot. Item 5. AU $55,000 (US $38,808).