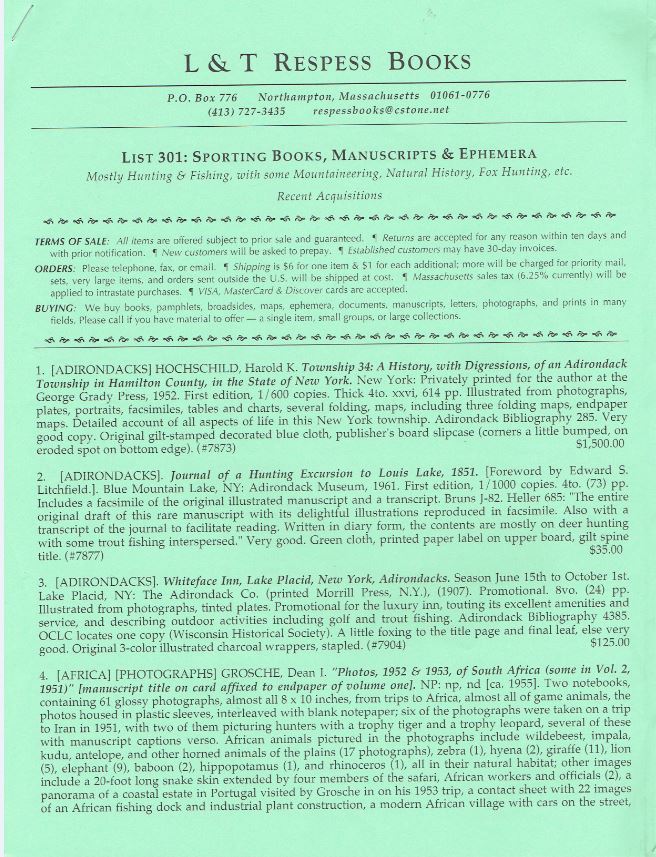 L & T Respess Books has a created a catalogue of Sporting Books, Manuscripts & Ephemera. The "sporting books" category does not feature much of today's popular team sports, though baseball is old and venerable enough to make its way into the collection. Hunting, fishing and other outdoor sports predominate. That also includes mountain climbing, though the average person is less likely to tackle that one. A few sporting activities popular a century or more ago that are frowned on today will also be found, such as big game hunting for endangered species and cockfighting. Still, much of what is here is focused around outdoor activities, and even in this electronic age, when much of our time is spent in front of display screens, and we don't hit the outdoors without our smart phones close at hand, many things we liked back then are still enjoyed today. Here are some selections from this catalogue of sporting items.

Unlike sports such as baseball and football, there aren't too many professional fishermen, unless one is speaking of the people who go out to sea with large nets. Most of the fishing books here were written by recreational fishermen, though one suspects they enjoyed fishing more than their real jobs. Here is a very rare one by a man whose day job was President of the United States. Item 47 is A Defense of Fishermen, one of only 60 copies privately printed in 1902. The author was Grover Cleveland, the President known more for serving two non-consecutive terms than anything he did while in office. He was a good and honest man, but his accomplishments were limited. Perhaps fishing was more his calling, and we presume he devoted a good amount of time to it after he left office, as the publication date of this book was five years after the second of his two terms in office expired. This copy is particularly rare as it carries an inscription from Cleveland, with the presumably humorous comment "Perch Fishermen Don't Count." Priced at $6,000.

Here is another presidential book from a man who rose to the high office only a few years after Cleveland left – Theodore Roosevelt. Item 171 is Roosevelt's account of the U. S. Navy during the War of 1812: The Naval War of 1812; or, The History of the United States Navy during the Last War with Great Britain, published in 1903. Roosevelt has inscribed the copy to Charles Eliot Norton, "from his mother's old friend Theodore Roosevelt." Norton's mother had been a childhood friend of the President. This title is a bit of an outlier in a collection of sporting books, and yet one suspects that for Roosevelt, there was some aspect of a sporting competition in warfare. Besides which, he was also a great sportsman and conservationist. $3,500.

Item 107 is an apparently unrecorded broadside depicting and retelling a deadly battle two centuries ago. With a hand-colored illustration signed "Bowen" (Abel Bowen, Boston engraver, author and printer), it is headed, A Tyger destroyed by a Serpent! Near Madrass, in India, on the 20th February, 1816, in presence of one of our Missionaries (a native of New-Hampshire.) The account says that the serpent struck the tiger with a venomous fang from a low tree branch. The tiger attempted to strike back with its paws as the snake was biding his time. Then, the serpent lunged at the tiger and wrapped himself around his prey. The tiger was helpless to extricate itself or fight back. The writer recounts that as the snake coiled tighter, he could hear the tiger's bones being crushed. $2,750).

Before there was television, you could still "see" the World Series on an electric player board. Item 15 is a broadside headed Family Theater Will Present The World Series on the Wonderful Electric Player. Every Play True to Life and at the Exact Time it is Made on the Diamond. This was for the 1921 World Series featuring the New York Giants vs. the New York Yankees. The electric player was some sort of display connected to a dedicated line from New York. As each play occurred, the result was entered in New York, from which it would immediately display on boards in theaters around the nation. While I am not certain how it displayed, it appears to have shown men on a diamond along with describing results, perhaps similar to what you can follow for non-broadcast games on sports internet sites like ESPN and Sports Illustrated. Once upon a time, this was the latest technology. This broadside was for baseball fans in Rome, New York. $750.

Item 196 is a trade catalogue circa 1936 from the Utica Duxbak Corp. announcing If You Hunt of Fish, There's a Duxbak Garment that Fits Your Sport. Duxbak. Get it? Waterproof garments were their specialty. Founded as a sportsmen's line by clothier Bird, Jones & Kenyon around 1906, Duxbak was its own company by 1914. They had a large manufacturing plant in Utica, New York, and had a sizable, devoted following for many years. As best I can tell, they were still making their line of waterproof garments as late as the 1960's, but probably did not make it to the next decade (there may be later "Duxbak" clothing but not from the original manufacturer). They promoted clothing that would last for life, and there must be some substance to this claim as you can still find many of their old jackets and stuff for sale online. This catalogue contains three mounted cloth samples. $45.