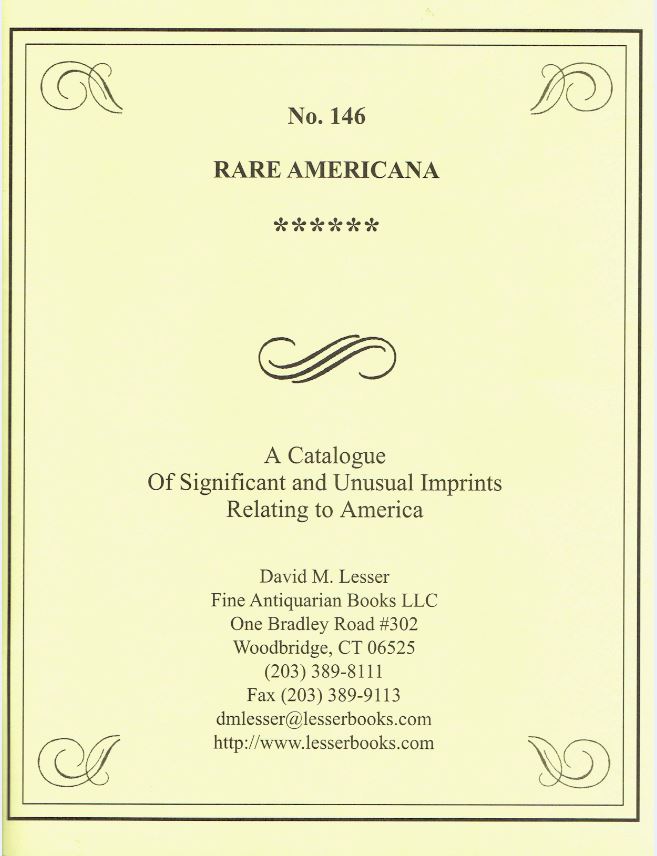 It's on to catalogue number 146 of Rare Americana from David M. Lesser Fine Antiquarian Books. In an era when printed catalogues, like printed books, are often superseded by their electronic counterparts, Lesser continues to allow us to view his books and other works on paper in a format their originators would understand. Just as there is something irreplaceable about turning the pages of a printed book, the same is true of the printed catalogue. How better to appreciate these works from the 18th and 19th centuries? Here are a few samples.

We begin with an item from the woman suffrage era from a name that will sound familiar: The Revolution in Women's Work Makes Votes for Women a Practical Necessity. Published in 1910, its author was Katharine Houghton Hepburn. Hepburn was a scion of upstate New York's prominent Houghton family, which included the founder of the Corning Glass Works. While most branches of the family were not so radical, her mother pushed her daughters to go to college and do more with their lives than just be homemakers. Katharine would become active in the suffrage movement, among those urging President Wilson to support the right to vote. After that right was won, she hooked up with noted woman's rights advocate Margaret Sanger to form the precursor of Planned Parenthood. She would continue to support the cause of women's issues, birth control in particular, the remainder of her life. If her name sounds familiar, the answer is yes, she was the mother of the famed actress of the same name. Item 65. Priced at $150.

Stephen A. Douglas is most remembered today as Lincoln's foil. He was the other participant in the Lincoln-Douglas debates, which most say Lincoln won, though it was Douglas who won the election for the senate seat from Illinois in 1856. However, the two would meet again for much higher stakes in 1860 – the U. S. presidency. That time Lincoln won easily. Douglas was one of many important northern political leaders who tried to convince the South not secede through offering compromises, eventually turning many northerners against him. Such would be the case in 1860 when both southern Democrats and northerners of various stripes rejected him. Douglas carried only one state – Missouri - plus half of New Jersey. Had he won, his would have been the second shortest presidency in history as he died the following June at age 48. Item 120 is James W. Sheahan's Eulogy Upon Stephen A. Douglas, Delivered Before Chicago University, Chicago, July 3, 1861. Sheahan lionized Douglas as a man of principle who would never "truckle to the slave interest... It was impossible for him to do so..." Questionable. Many felt he compromised too much. Douglas never revealed any particular feelings about slavery, pro or con, including any signs of moral difficulties with it. However, he was strongly pro-Union. Those sentiments grew even stronger as the South seceded. He attempted, on Lincoln's behalf, to convince southerners not to secede, and when Fort Sumter was attacked, urged an even stronger response than Lincoln favored. Sheahan notes Douglas' passionate, undying loyalty to the Union in his eulogy. Item 120. $500.

Douglas' loyalty was displayed just five weeks before his death in this Speech of Senator Douglas, Before the Legislature of Illinois, April 25, 1861... Douglas condemns the "war of aggression and of extermination against the government established by our fathers," which he describes as "the best government the sun of heaven ever shed its rays upon." Douglas strong words were particularly valuable in keeping many fellow northern Democrats in the Union camp. Item 43. $1,000.

Item 14 is an account of one of the worst fires in American history: Thrilling Personal Experience! Brooklyn's Horror. Wholesale Holocaust at the Brooklyn, New York, Theatre, on the Night of December 5th, 1876. The theater was jammed that night with playgoers there to see the ironically titled play, Two Orphans. A small fire broke out backstage during an intermission. Water was not readily available, so stagehands tried to beat out the fire as the play resumed. As sparks reached the stage, the actors played on, trying to avoid panic. They urged patrons to remain in their seats, but once the extent of the fire became known, attendees panicked anyway. They rushed for the exits. Those on the bottom floor escaped, but those on the highest level, served by only one staircase, were trapped. The staircase became jammed with those attempting to flee, and quickly rising acrid smoke filled the air. It soon suffocated those in the upper seats. In all, around 300 people died that night. The publisher of this book, Philadelphia's Barclay & Co., was noted for telling sensational tales. $350.

In April 1861, delegates to a Virginia secession convention voted in favor of seceding from the Union. However, a majority of the delegates from the state's western and northern counties were opposed. They followed up with their own convention in Wheeling, and after Virginia voters endorsed secession, declared the state's government was illegal and set up their own rival government. In turn, that government authorized the western counties to secede from the state of Virginia. West Virginia was created, and in 1863, admitted to the Union. However, the Confederacy would battle for control of the territory, and some parts retained substantial Confederate support. This broadside was issued from Charleston on September 14, 1862: To the People of Western Virginia. The Army of the Confederate States has come among you to expel the enemy, to rescue the people from the despotism of the counterfeit state government imposed on you by northern bayonets... The Confederate army had taken parts of what was still the western part of Virginia, and General William Loring notified residents that they were to be loyal to the government in Richmond. They would not be punished so long as they did not obey directives from the government in Wheeling, and those eligible to serve joined the Confederate Army. Item 31. $1,250.