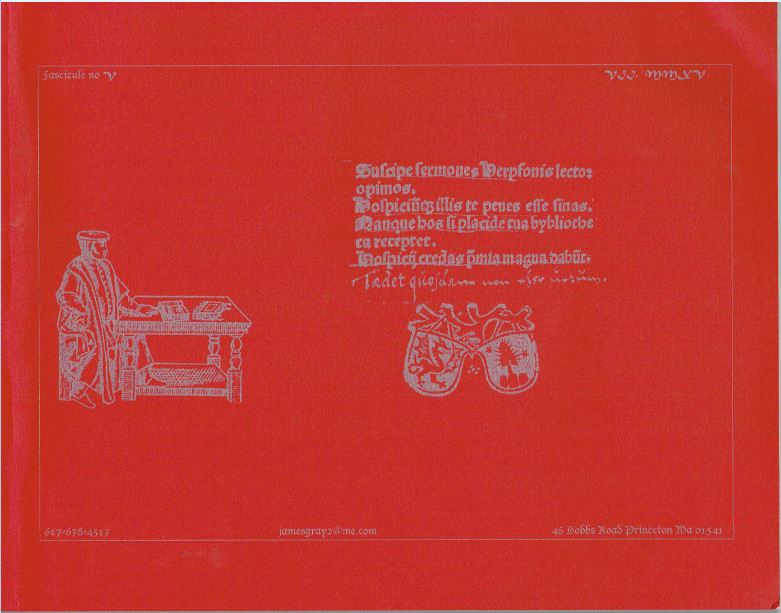 James Gray Booksellers has published their Fascicule no V, also known as number 5. Gray focuses on the very old in books, most titles being 17th century or earlier. Not surprisingly, many of the works relate to theology, the field then subsuming much of what today is science, medicine and the like. Still there are many tracts just relating to science, or math, travels (particularly early visits to New England), botany, and even some good old gossip. They may have seen things differently then, but their curiosity was similar to our own. Here are a few items from this collection.

Are you reading this article because you chose to read it, or do you have no choice but to read it, no matter how much you don't want to? It's the age old question – freedom or determinism. That question became more debated after the Protestant Reformation, but it was a question even earlier. Item 722G is De Divina Praedestinatione. There are multiple books with this title, but this is one once attributed to Felicianus, now believed to be the work of Petrus de Ilperinis. We don't have a date of authorship, but it preceded printing since de Ilperinis died in 1381. This first edition was published in 1473-74. I have not been able to find much out about the author, other then he was a Dominican and his brother a cardinal. Nor have I been able to learn what his position was on predestination. My Latin is insufficient to read his book. It appears that interest today is less in Petrus' words than in the beauty of the book, the work of the short-lived press at the Monastery of SS. Ulrich and Afra in Augsburg. Priced at $15,500.

Item 721G is an important work in American history. It is New Englands Memoriall: or, A Brief Relation of the most Memorable and Remarkable Passages of the Providence of God, manifested to the Planters of New-England in America; With special Reference to the first Colony thereof, Called New-Plimouth. Despite the reference to God in the title, this is the first secular work printed in English America, the first true historical tract printed in America. It was published in 1669. The author was Nathaniel Morton, who had a front row seat to watch the development of the Plymouth colony. He arrived in 1623, just three years after the Pilgrims, and after his father died, he was raised by his uncle, Governor William Bradford. Morton not only had his own experiences to draw upon. He had access to the many manuscripts Bradford left, as well as writings of other important figures in the colony. Morton, himself, was one of Plymouth's most important figures of the 17th century. $65,000.

Queen Elizabeth I died in 1603, unmarried, childless, but highly respected. By the end of the 17th century, her supposed love life had become the subject of numerous exposés. What, if any, love life Elizabeth had is unknown. It is known she had some favorites, and the one she seemed most likely to marry was Robert Dudley. For whatever reason, perhaps political, it never came to pass. Dudley died in 1588. Her affections would later grow for Dudley's stepson. Now an elderly lady, that stepson, Robert Devereux, Earl of Essex, was more than 30 years her junior. He was brash, adventuresome, personable, and ambitious. At times he got away with behavior disrespectful to a queen, but she had a soft spot for him. He used that to advance his career. However, a poor showing while leading troops in Ireland, plus a sudden, unannounced return to England to justify his behavior when told not to leave Ireland, led to a sort of house arrest. More importantly, he was stripped of his authority and source of income. Rather than seeking to make amends, the brash Devereux tried to mount a rebellion. He was quickly defeated and sent to the Tower of London, where his head was removed from the rest of his body. The old Queen knew when the borders of sentiment had been breached. Item 503F is a bit of revisionist history from 1695, The Secret History Of the Most Renowned Q. Elizabeth And the E. of Cssex [sic]. By a Person of Quality. Maybe, but not of a whole lot of quality. $1,500.

Next up is a very early combination natural history and travel guide for New England. Item 603G is An Account of Two voyages to New-England. The voyager was John Josselyn, who visited New England in 1838-39 and again in 1663-71. His brother lived in Maine, which was then part of Massachusetts. Published in 1673, Josselyn writes about the flora and fauna of New England, as well as about its government, society, folk medicine and other observations from his extensive travels throughout the region. He also provides advice on those considering emigrating to the new land. $35,000.