A 25th Anniversary Catalogue from Back Of Beyond Books 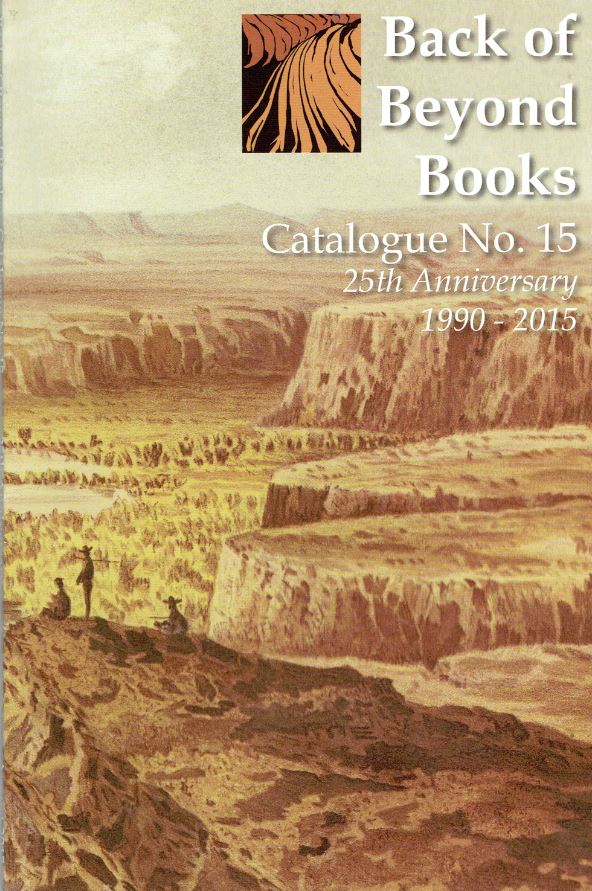 The 25th anniversary catalogue of Back of Beyond Books.

Back of Beyond Books Of Moab, Utah, has published their Catalogue No. 15. 25th Anniversary 1990-2015. The bookseller's name comes from Edward Abbey's The Monkey Wrench Gang. Abbey wrote on topics related to the American Southwest and had once worked as a ranger in nearby Arches National Park. Abbey died in 1989, and the book shop was opened the following year in his honor.

This is the 25-year-old bookseller's largest catalogue yet, with sections on their specialties. Most notable are books about the Southwest. Many of the titles came from the collection of Bob Trapp, who amassed a collection of almost 6,000 books focused on New Mexico and Western Americana before his death last year. Other subjects include literature and poetry, often with a Southwestern lilt, Mormon history, the American Indian, natural history and the environment, Western Americana, and miscellanea. Here are a few selections from the over 300 items offered.

We begin with the pioneering expedition into what is today America's Southwest: Exploratory Travels through the Western Territories of North America, by the expedition's leader, Zebulon Pike. The first part of the book covers his earlier journey up the Mississippi, but Pike's second mission to find the headwaters of the Arkansas and Red Rivers took him into the Rocky Mountains of today's Colorado. It was sort of a follow-up mission into the new Louisiana Territory following Lewis and Clark's exploration of the Northwest. Pike never made it to the deserts and canyons of most of the Southwest, though he did find the spectacular canyon at Royal Gorge, and, naturally enough, Pike's Peak. The men did get confused and for awhile and lost their way, entering Mexican (Spanish) territory, where they were captured and marched as far south as the state of Chihuahua before being freed. Ironically, this gave them a far better look at Spanish settlements, and an opportunity to gauge Spanish military strength, then if they had simply been sent home. The western mission took place in 1806-1807, and this first British edition was published in 1811 (the year following the American edition). Item 50. Priced at $6,500.

If the Rocky Mountains were essentially a great unknown when Pike visited them at the beginning of the 19th century, they had been thoroughly explored by the end of the century when Mary M. Marks took her photographs. The discovery of gold can do this. Mrs. Marks was obviously a skilled photographer, though she is virtually unknown. Her husband, John Marks, was an engineer for the Gold Pan and Oro Grande mines in Dillon and Breckenridge. Mrs. Marks was their official photographer. Offered is a collection of 325 glass plate negatives she took from 1899-1904. Almost nothing is known about her career, but her tackling the difficulties of photographing scenes in hard to reach mines, at times under extreme weather conditions, was very rare for a woman photographer at the time. There are many views of the mines, most including people, and others of persons at rest or being playful. John Marks was obviously a very skilled engineer, arranging for water to be piped as much as 10 miles to operate hydraulic equipment. The future looked very bright in 1899, with tens of millions of dollars worth of gold expected to be extracted. By 1904, it was concluded that the amount of gold was insufficient to justify the cost of continued operations. The source of this amazing but obscure collection is a dealer who bought it from a collector who bought it from John Marks, who worked for over 30 years from an office in Denver after the mine closed. Item 90. $35,000.

This idea made perfect sense for Texas and the desert Southwest. Item 15 is the Report of the Secretary of War, Communicating Information Respecting the Purchase of Camels for the Purpose of Military Transportation, published in 1857. After all, if camels were the preferred mode of transportation in the deserts of Arabia, it just made good sense to import them for use in America's hot and arid regions. This report provides detailed information about camels, their behavior, how to feed them, etc. The Secretary was an enthusiastic supporter, but for whatever reason, the idea didn't pan out. The War Secretary was Jefferson Davis, and as we now know, Jeff Davis occasionally had some bad ideas. $225.

Item 63 is Colorado Volunteers in the Civil War: The New Mexico Campaign in 1862, by William Clarke Whitford, published in 1906. The Colorado volunteers did much to save the Union in the Civil War, though their role is not well known today. In 1862, several thousand Confederate volunteers from Texas traveled up the Rio Grande from El Paso, overwhelming the small number of Union defenders. The army had deployed almost all of its men to the east, not expecting such an attack. The Confederates captured Albuquerque and Santa Fe, and hoped to make it to Colorado, seize gold production to finance their war, and take over California, its gold fields, and the rest of the West. They had the manpower to defeat the smaller number of Union defenders. This is where the Colorado volunteers came in, augmenting Union soldiers and making the battle a fair fight. Instead of another mismatch, the volunteers and Union soldiers held back the Confederates for three days at Glorietta Pass outside of Santa Fe. Ultimately, the Confederates won the battle, but not before Union troops snuck around behind them and totally destroyed the Confederate supply train. The Confederates had no choice but to hightail it back to Texas. Colorado and the West were saved for the Union. $100.

Here is a very unusual religious treatise: Compilation of Notes and Memoranda Bearing Upon the Use of Human Ordure and Human Urine in Rites of Religious or Semi-Religious Character. The author of this 1888 tract was army Captain John G. Bourke, who also authored Scatalogical Rites of All Nations. Why Bourke chose this topic is unclear, but someone had to to do it.... I think. Perhaps this will provide some guidance on which religions to consider joining, or not joining. Item 9. $215.

Here is a sale catalogue for an unusually named critter: Dispersion Sale: George W. Baker's Famous Herd of Anxiety Herefords, which took place on May 14, 1925. The sale of these anxious bulls and cows took place in Littleton, Colorado. What are "Anxiety Herefords?" Cows in need of psychotherapy? Evidently, it is a breed of cattle that displayed well at shows during the late 19th, early 20th century. As best I can tell, they had the advantage of maturing quickly and their meat was not too fatty. Why they were called "Anxiety Herefords" is beyond me, though I suspect the answer is something other than their psychological state. References to them seem to all go back to the early 20th century or earlier, leading me to suspect that the breed may have disappeared, but not being a cattleman, that's just a guess. Item 304. $75.