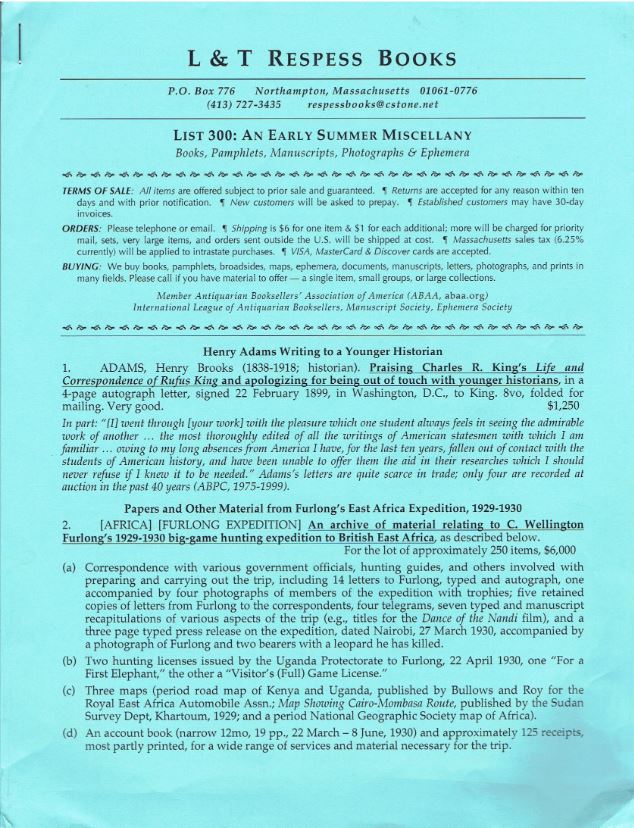 L & T Respess Books has reached a large, round number with the issuance of their List 300: An Early Summer Miscellany. Early summer may have turned to late, but this is still a fine collection of varied and interesting works, including both books and more ephemeral items. Here is a sampling of what is available.

We begin with an inscribed pamphlet that marked a notable turning point in the career of perhaps the Senate's greatest orator ever, Daniel Webster. Webster was a man devoted to the preservation of the Union, and became a great hero in the North standing up to South Carolina during the nullification crisis of the early 1830's. However, as anti-slavery sentiments built in the North over the ensuing years, Webster was more willing to compromise on those sentiments to preserve the Union. Of course, the same could be said of Lincoln a decade later, but in 1850, Webster supported Henry Clay's Compromise of 1850. That compromise included heavy-handed support of the Fugitive Slave Law, a hated law in the North as it forced Northerners, against their principles, to participate in the capture and return of runaway slaves. Webster's support of the compromise put an end to his dream of ever becoming President. In this Speech of Hon. Daniel Webster, on Mr. Clay's Resolution...March 7, 1850, Webster labeled slavery an evil, but not as evil as disunion. He warned the South there would be no secession without war, but also said that the North had not lived up to its requirements under the Fugitive Slave Law. Webster has inscribed this copy to Moor Russell, the largest merchant in Plymouth, New Hampshire, with family ties to important state political figures. This pamphlet is bound together with 11 other period pamphlets. Item 133. Priced at $2,250.

Item 38 is a most unromantic romance, The Clansman: An Historical Romance of the Ku Klux Klan, published in 1905. Thomas Dixon paints a chivalrous image of the KKK, aggrieved southern white people fending off the abuses of northern Reconstructionists and uncivilized freed black slaves. While the book itself was not a big seller, the resulting play would become very popular in the South, and ten years later, a major success when adapted by D. W. Griffith into the movie Birth of a Nation. It provided the spur that enabled a fading Klan to reach greater numbers than it had seen in its earlier, post-Civil War days. While Dixon disavowed Klan violence, his sympathetic portrayal enabled it to achieve the size and strength needed to perpetuate its violence against blacks and other minorities. This copy is marked as a souvenir edition of the New York Alumni Chapter of Kappa Alpha, a fraternity founded at Virginia's Washington University (later Washington and Lee) shortly after the Civil War, which long draped itself in Confederate symbolism. $1,250.

Item 12 takes a look at internal transportation in America just as it was about to undergo a major shift: A Connected View of the Whole Internal Navigation of the United States, Natural and Artificial; Present and Prospective. George Armroyd's work, which contains 10 folding maps, hand-colored in outline, takes a look at shipping along America's lakes, rivers, and canals as of its date of publication in 1826. It covers such factors as expenses, mileage, tonnage, and proposes renovations to improve shipping. The book was published in 1826, at the dawn of the building of railroads, which would soon do to water shipping in America what highways would do to railroads at the turn of the 20th century. $4,500.

Next we have Instructions for the Grand Harmonicon, a musical instrument designed by Francis H. Smith of Baltimore in the 1820's. These instructions were printed in Baltimore in 1828. The chances are you don't have a Grand Harmonicon, although a few dozen are believed to have survived. The harmonicon was based on an instrument designed by America's most notable colonial inventor and polymath, Benjamin Franklin. Franklin called his the "armonica." It consisted of 25 glasses in a wooden cabinet, which were played by moistening the fingers and rubbing the edges in a circular motion. It is the principle that creates those strange tones when you do the same with a wine glass. However, instead of filling the classes with different amounts of water to create different notes, Smith's glasses were each blown to produce the desired tone. The sound created by the glass, as it is with wine glasses, is an ethereal one, unlike any other musical instrument. Beethovan and Mozart used similar instruments in their music, and such glass instruments are still used today to create haunting sounds. Item 91. $1,500.

Item 136 is Hell on the Border; He Hanged Eighty-Eight Men, by S. W. Harman, published in 1898. It is an account of the court at Fort Smith, Arkansas, that dealt with crimes in Oklahoma and Indian Territory, and its legendary judge, the infamous "Hanging Judge," Isaac Parker. Parker issued no-nonsense justice from the bench, much of it coming at the end of a rope. Parker was extreme even by Wild West standards. He served from 1875-1896, but as time wore on, the Supreme Court reduced the territory covered by his court, and overturned many of his convictions. Parker was not pleased, but the time for his form of justice had passed when he took ill and died in 1896. $1,750.