Beauty in Printing from the Veatchs Arts of the Book 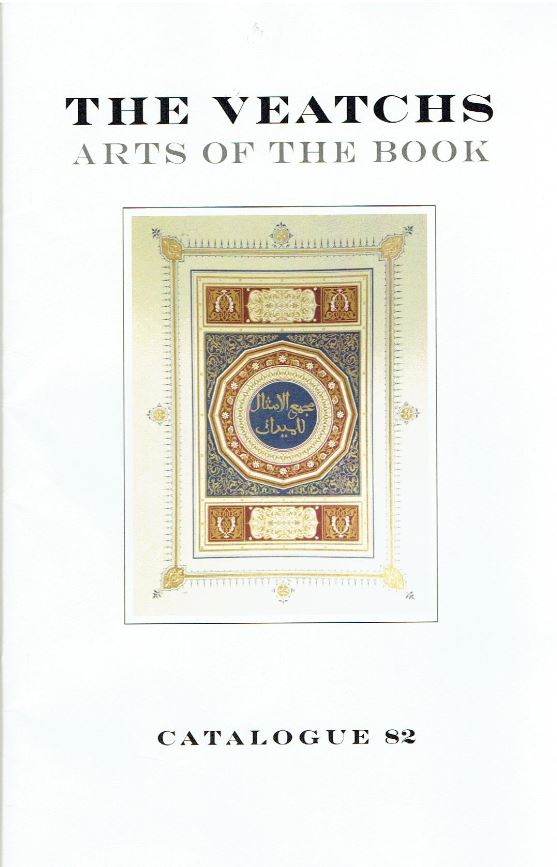 The Veatchs Arts of the Book has released their Catalogue 82 Summer 2015. Featured, naturally enough, are books as art, books as objects. Beauty is featured, whether through designs and illustrations within or the bindings that envelop the pages. You won't find any reading copies here, as reading was rarely the primary purpose. Many of the works come from limited run, fine presses, whose purpose was to produce quality, not quantity. A few are most unusual items for those who seek the uncommon. Here are a few of the books and ephemeral items to be found in this latest artistic collection.

We begin with a lecture from an expert on private press books and books as art, Leonard Baskin. Baskin was a sculptor as well as graphic artist who founded the Gehenna Press at Yale University in 1942. Fourteen years later, Baskin moved his press to Northampton, Massachusetts, but returned to Yale in 1967 to present his thoughts on graphic arts and the book as object. The occasion was the opening of the Printing and Graphic Arts Collection at the Yale University Library. The title is To Colour Thought, and while it was published by Yale University in New Haven, Connecticut, it was printed by Officina Bodoni in Italy. This is number 96 of 300 copies printed. Item 5. Priced at $250.

Next we have the thoughts of a pioneer in the private press movement, Emery Walker. Walker became friends with the legendary leader of the Arts and Crafts movement, William Morris, in the 1870's. Both shared a love of fine printing as well as socialist beliefs. After Morris' death, Walker went into partnership with T. J. Cobden-Sanderson to form the Doves Press. The relationship did not end all that well as Walker left Doves. Colin Franklin published this book about Walker in 1973, which includes reproduced specimens in the back pocket: Emery Walker. Some Light on his Theories of Printing and on his Relations with William Morris and Cobden-Sanderson. It is one of 500 copies. Item 20. $200.

Joseph W. Reed is an artist who may not be a household name, but few can match his imagination and creativity. Reed is a self-taught artist. His primary career was as a teacher, now Professor Emeritus of English and American Studies at Wesleyan University. In the 1960's, he began painting, and over the years has used numerous mediums for his artwork. He has also employed several recurring themes, which tend to be odd, combining the unexpected and incongruous with historical detail. Combining unrelated people, or placing people in unlikely or impossible locations, is among his noted themes. Such themes as "First Ladies in Space," is an example. In another, he places Mamie Eisenhower with Cardinal Richelieu. What they had in common escapes me. You can see Benjamin Harrison surrounded by fish in his series of "Chief Executives Underwater." A series of paintings of General Custer places him in unlikely settings, such as on Mrs. Whistler's lap, while another has Whistler's mom in jail. Reed did a major series on insects, and you can see William Morris and his wife, Jane, infested by cockroaches. You have never seen Morris this way before. Item 61 comes from his "History of Western Ant" collection. It is Reed's rendition of Paul Revere's A View of Part of the Town of Boston in New England and British Ships of War Landing Their Troops, a 1970 update of Revere's 1768 work. A close look reveals that the British troops being rowed ashore are actually ants. This is original artwork, acrylics on masonite. Item 61. $3,500.

Item 54 consists of some more traditional artwork. It is Barry Moser's illustrations of Twelve American Writers. None are placed in unusual settings or has insects crawling upon them. What it does have is Moser's portraits of Cooper, Emerson, Hawthorne, Poe, Thoreau, Melville, Crane, Twain, Fitzgerald, Faulkner, Hemingway, and Steinbeck. There were only 50 copies produced, while this copy comes with an extra suite of signed engravings on Japanese paper laid in. The copies in the book are also signed. As well, the book is inscribed by Moser. It was produced in 1974. $1,400.

R. Hoe & Company is noted for its printing presses, while its once owner, Robert Hoe III, is known for having by far the most valuable book collection ever sold at auction when it was sold in 1911-12. While its presses were once used to print many of the nation's newspapers, R. Hoe & Co. also made saws. Item 27 is a Hoe advertising broadside from the 1860's for Cast Steel Saws. The Veatchs note that it is an unusually colorful and artistic broadside, at least by Hoe standards. Hoe & Co. eventually went bankrupt with the decline of newspapers, but the saw business continued, and survives today as Pacific/Hoe Saw and Knife. Item 27. $600.

The Veatchs Arts of the Book can be reached at 413-584-1867 or veatchs@veatchs.com. Their website is www.veatchs.com