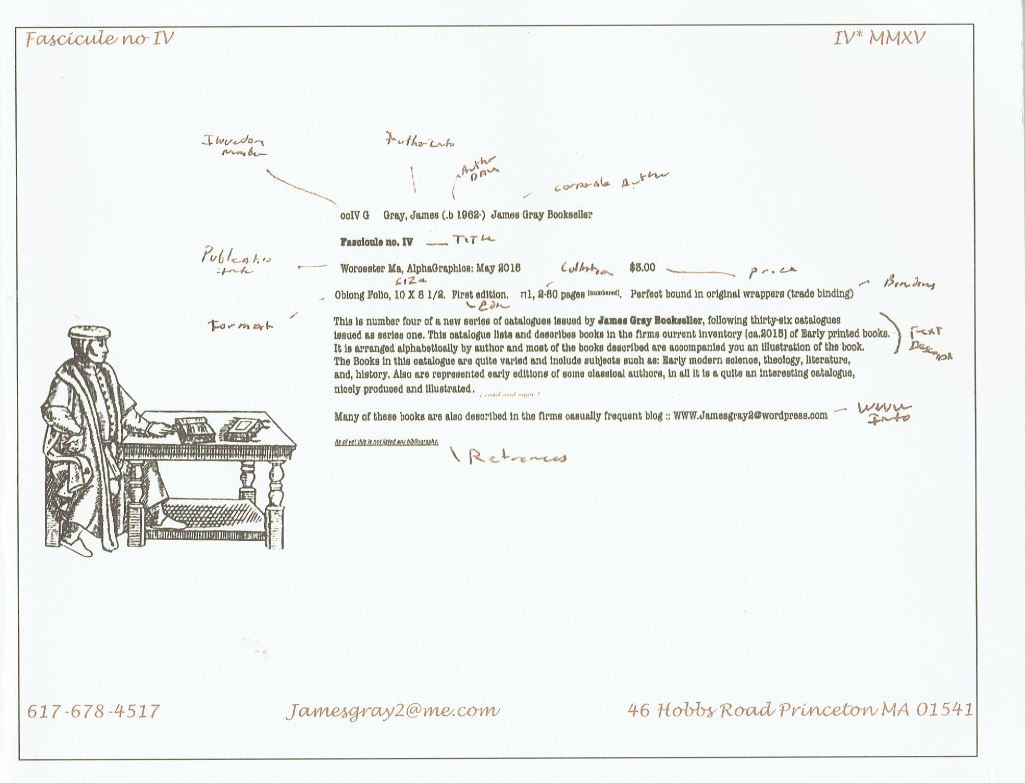 James Gray Bookseller recently published Fascicule no. IV, the "IV" standing for number 4, not those things they stick into your arm at a hospital. It follows Gray's earlier series of 36 catalogues. Gray, of Princeton, Massachusetts, specializes in older books, mostly 17th century or earlier. That originates most of them from Europe, though we find some from America. Massachusetts was, after all, a lively place of the turn of the 18th century, even if most of the rest of what now is the United States was uncharted frontier at the time. Topics vary, and many books are uncommon and unusual, but reflect their long ago times. Here are a few.

We begin with a major landmark in English law, a compilation of 13,485 cases that came to establish the common law in the 16th century. Anthony Fitzherbert was a judge and legal scholar who compiled this vast collection of the decisions in legal cases so people would be able to understand what the common law said. Up until that time, tracking down the decisions that set the common law was almost impossible, leaving people in the dark as to what the law said. Fitzherbert first published his work, Le Graunde Abridgement, in 1514. Item 531G is a copy of the second Tottell edition, published in 1577. Richard Tottel was appointed as the exclusive publisher of the common law in Britain in 1553, a monopoly he held until his death 40 years later. Priced at $4,900.

Richard Mather was the progenitor of perhaps the most notable family of American theological figures. His son, Increase Mather, was a major religious leader as well as historian in the second half of the 17th century and the early 18th. His grandson, Cotton Mather, was an even more notable figure, probably the most important religious leader of the Colonial period. The reputations of both were scarred by their tacit acceptance of (though not overwhelming support for) the Salem witch trials. Interestingly, Richard was more rebellious and open-minded than his prodigy. He supported the controversial Half-Way Covenant that opened his church to those who couldn't cite a personal conversion experience. Before sailing to America in 1635, he had been suspended from the ministry for non-conformist views, particularly for his failure to wear the proper vestments. Mather was also a strong supporter of congregational polity, the principle that each church has the authority to control its own affairs, and its congregants have the authority to make those decisions and select its leaders. His views are described in A Platform of Church Discipline, gathered out of the Word of God... This book, based on Mather's draft, was published in 1711, several decades after his death. Item 631G. $15,000.

While "witches" were being burned in late 17th century America, even uglier things were going on in the colonial homeland in the name of religion. Item 649G is A Compendious History of the Most Remarkable Passages of the Last Fourteen Years, with an Account of the Plot, as it was carried on both before and after the Fire of London to this present Time. This is actually a compendious history of a most remarkable fabrication. At the time of this publication, 1680, England was involved in one of its many battles between Protestants and Catholics. Catholics occasionally got the upper hand, but usually it was the more numerous Protestants, who by the end of the century, would seal their permanent control of then government. This book is an account of the so-called "Popish Plot," when Catholics were alleged to have engaged in all sorts of nefarious activities, including a plan to assassinate the King, to take over the British government and do terrible things to Protestants. There was no evidence for any of the claims, but the claims themselves were enough to lead to the execution of over 20 Catholics. The accusations came from one Titus Oakes, an expelled Jesuit who got his revenge, though later imprisoned and humiliated himself. This book was published anonymously. $2,400.

If religion was used to disguise the personal motivations of people like Oakes, it was the source of humanist values of the great 16th century German theologian Erasmus. Erasmus was a priest who sought to bring biblical teachings to people in a language they could understand. Along with a Latin translation of the Bible, his works include this, an English translation of his Paraphrase of Erasmus upon the Newe Testament. His paraphrase was a further attempt to make the meaning of the words of the New Testament understandable to its readers. Erasmus lived during a difficult time for the Church – the Reformation. Erasmus corresponded regularly with Martin Luther and others, but remained loyal to the Catholic Church, plying a middle ground supporting reformation of the Church as opposed to its replacement. This translation, published in 1548, was promoted by Catherine Parr, the last of King Henry VIII's six wives, a deeply religious woman who shared Erasmus' desire to educate the people in the Bible. Item 297. $38,000.

Item 893F is Fragmenta Aurea. A Collection of all the Incomparable Peeces, Written by Sir John Suckling. And published by a Friend to perpetuate his memory. It was published in 1646, roughly five years after he died. Suckling led a brief but mostly charmed life until its final days. His father was a wealthy officer of the court. Sir John inherited his estates at the age of 18, considerable wealth he supplemented through gambling. He was one of the most studied and skillful card players of his time, and the invention of the game of cribbage has been attributed to him. He was also a bowler. He served in several wars, and during the 1630's, was noted as a Cavalier, one of the court poets supported by King Charles II who would support their King when the English Civil War erupted a few years later. Suckling wrote plays, poems, and various other pieces during the 1630's, and was a popular figure at the time, though his writing is generally seen as good but not great today. You will have trouble locating it all without one of the early compilations of his work such as this first one. Suckling outfitted a force to support Charles in his first attempt to subdue Scotland, and was implicated in a royalist plot in 1641 that forced him quickly to leave England for exile in France. He apparently died a short time later, the circumstances a mystery, though the most accepted theory seems to be suicide over the fear of losing his wealth, though one rumor had him being killed by a servant. $5,500.