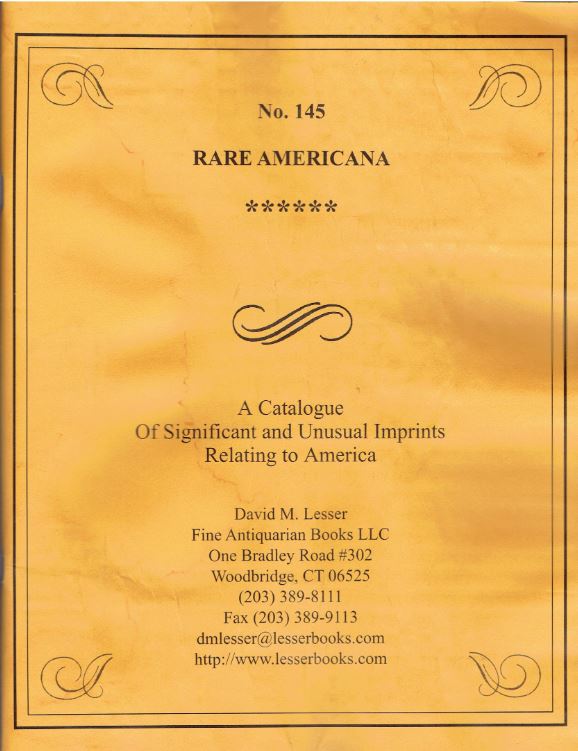 David M. Lesser Fine Antiquarian Books has issued No. 145 of Rare Americana. It contains books, pamphlets, broadsides and manuscripts pertaining to America, primarily during the 18th and 19th century. Most items are uncommon, some unique one-of-a-kind documents. They cover such issues as politics, religion, war, peace, revolution, rebellion, slavery, abolition, crime, prisons, arms, medicine, women's rights, death and taxes, all the big issues of the day. Come to think of it, we are still fighting over these issues. Doesn't anything ever get resolved? Here are a few examples.

We start with a contemporary manuscript copy of a resolution introduced by Alexander Hamilton and adopted by Congress on May 26, 1783. It is not one of our more honorable acts, but displays the founders ambivalence with the institution of slavery, one that most did not like but defended as a current necessity, hoping it would fade away with future generations. This resolution came at the end of the Revolutionary War, and was sent to George Washington as directions for his peace negotiations with the British. The British had promised many American slaves that if they fought on their behalf, they would be granted their freedom. Of course, the British assumed they would win the war. Now defeated, and planning their departure from the continent, the British were faced with either keeping their promises or abandoning those slaves that helped them. This resolution from the American Congress calls on the British to remove themselves "with all convenient speed, and without causing any destruction, or carrying away any Negroes or other property of the American inhabitants..." Hamilton, like many others, shared the ambivalence to slavery, being intellectually opposed, even helping form the Society for the Promotion of the Manumission of Slaves in New York, while participating in slave purchase and sale transactions on behalf of his wife's slave owning family. Ultimately, the British kept their word to the former slaves and ignored this demand, boarding some 3,000-4,000 on ships in New York sailing to England or its colonies in Canada and Jamaica. A manuscript copy of this resolution was prepared for Washington by Congress' Secretary Charles Thomson. This is a copy, evidently prepared at the same time, and while it also indicates being signed by Thomson as was the original, this one appears to have been written by his assistant, George Bond. Item 27. Priced at $12,500.

Politics has become uglier in recent years, but rather than reaching new lows, perhaps we have just returned to the level of invective of earlier years. Item 29 is Letter No. 1 of eight printed letters promised by Hiram Cunningham in 1845, though he never published any more. Cunningham provides his opinion of ex-President John Tyler, and while you might think he would have moved on after Tyler left office, Cunningham had a few choice words to say, summed up by the title: Secret history of the perfidies, intrigues, and corruptions of the Tyler Dynasty, with the mysteries of Washington City, connected with that vile administration, in a series of letters to the ex-acting President, by one most familiar with the subject. Avenging justice, though sometimes slow, yet always sure, will soon thunder down anathemas upon your head. The accumulated misery your perfidy has caused, will yet be seen, like foul spirits, passing before your vision, and make you curse the day that gave you birth. If he wrote that today, he soon would have had a visit from the Secret Service, and perhaps that is why he wrote no more. We have not been able to determine who this Hiram Cunningham was or what his particular beef was with Tyler, though Tyler is certainly in the running for honors as the least popular president in American history. Item 29. $250.

Item 105 is an account of a murder with a certain irony. The title is An Authentic Life of John C. Colt. Now Imprisoned for Killing Samuel Adams, in New York, on the Seventeenth of September, 1841. It was written by Charles F. Powell, who visited Colt in prison, and published the account the following year. Colt was no common criminal. He was a bookkeeper, teacher, and law clerk. Colt wrote the quintessential textbook at the time on double-entry bookkeeping, not part of the profile of the typical killer. Colt owed Adams an amount of money (said to be $1.35) for printing. Colt claimed Adams attempted to choke him with his tie, whereupon Colt grabbed what he thought to be a hammer and struck his creditor four or five times. It turned out he had grabbed a hatchet instead. His quadruple-entry hacheting finished Adams off. Colt then did what anyone would do who had accidentally killed a man in self defense. He salted the body, packed it in a shipping crate, and sent it from his home in New York to a non-existent address in New Orleans. The jury didn't buy the excuse and he was sentenced to death. Numerous appeals and requests to the Governor from important people for a pardon were denied. Colt only avoided the hangman's noose by stabbing himself to death the morning he was to be executed. As for the irony, it was in Colt's choice of a hatchet as the murder weapon. Colt was the brother of the famous gun maker Samuel Colt. $600.

Here is a picture of a man who did use a gun to kill his victim, though it wasn't one of Colt's. Item 77 is a mugshot of Leon Czolgosz, showing head-on and profile views of the killer. Czolgosz was an anarchist. He felt the government was aligned against the interests of the working people and decided to do something about it. In 1901, he shuffled off to Buffalo to attend the Pan-American Exposition. He wasn't there to see the exhibits. Instead, he stood in a receiving line to greet President William McKinley, and when his turn came, he pulled out his pistol and shot the President. McKinley died of his wounds eight days later. Czolgosz, pleased with what he had done, refused to testify at his trial and would not even cooperate with his lawyers. He was quickly convicted and 45 days after McKinley died, Czolgosz went off to join him from his seat in the electric chair. The back of the photo is signed by James F. Vallely, Chief of Detectives for the Pan-Am Exhibition, and Detective Sergeant C. H. Reynolds. It was Vallely who captured Czolgosz and took him into custody. $1,500.

Next is one more item filled with irony. Item 54 is Fourteen Months in American Bastiles by Frank Key Howard, published in 1863. Howard was a Baltimore newspaper editor with southern sympathies. At the time of the Civil War, Maryland was a border state, with many southern sympathizers. When war broke out, there were riots in the city. President Lincoln responded by suspending habeas corpus. Howard attacked the move in his editorial, whereupon he was arrested and incarcerated, the subject of this book. Here is the irony – Howard was detained at Fort McHenry. It was from imprisonment on a ship in the harbor that his Grandfather, Francis Scott Key, observed the bombing of Fort McHenry and wrote the Star Spangled Banner. It should be noted that despite Key's stirring lyrics, and personal abhorrence of slavery, he was also stridently anti-abolition and once, in his role as a federal prosecutor, prosecuted a man for simply possessing some anti-abolition literature. The man spent eight months in prison awaiting trial, and though acquitted, contracted tuberculosis in prison and later died from it. What goes around... $150.