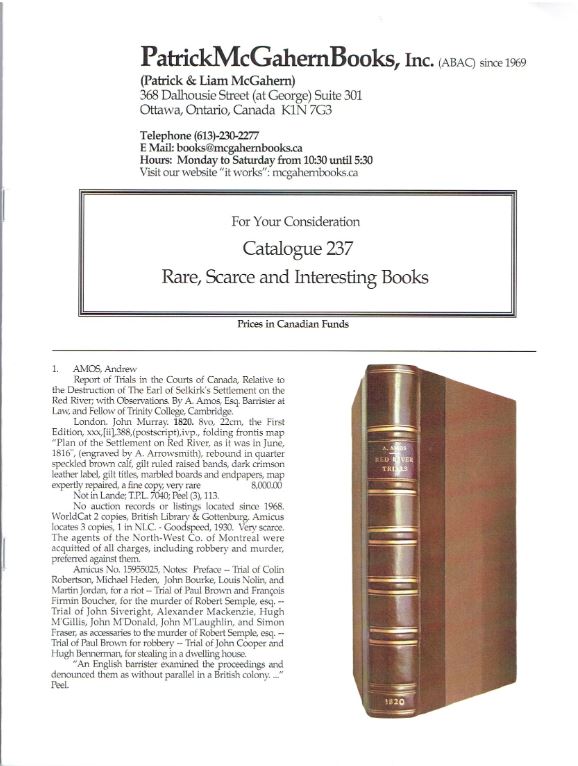 Patrick McGahern Books has published a catalogue of Rare, Scarce and Interesting Books. The number of Canadian items will quickly lead you to conclude this must be a Canadian bookseller. That is true, but since so much of this material is historical in nature, we find many items related to the three other countries big in Canada's history – the United States, England, and France. All three have been friends, enemies, and have fought on Canadian soil (or sometimes Canadian ice). It is a large land with an exciting history, too often overlooked by its American neighbor, but that's because they don't cause problems for us like some lands far, far away. There are thousands of miles of border, but no fences or walls. Here are a few items found in this latest McGahern catalogue.

We will start with an early journey that is important both to Canadian and American history. Indeed, Louis Hennepin was the first European to view the quintessential meeting point of the two countries – Niagara Falls. He exaggerated its height, but Father Hennepin was prone to exaggeration on occasion. Hennepin was a Recollet missionary, though better known for his explorations than his ministering. Hennepin was sent by his order to Quebec, and then accompanied La Salle west in 1678. He was there for the building of Fort Crevecoeur, which the Indians called "Checagou" (Chicago). After that, he was sent off with two others to travel down the Illinois River to the Mississippi, but to then proceed north up the river, rather than south as had been done before. He would do that, be captured by Indians, and later ransomed free. During his travels, he discovered St. Anthony Falls (which he named) and went as far north as the site of today's Minneapolis. Hennepin had traveled farther into the heartland of America than any European before him. He wrote a couple of books after returning to France. Item 29 is a first edition of Nouvelle decouverte d'un tres grand pays situe dans l'Amerique, entre le Nouveau Mexique et la mer Glaciale, published in 1697. Hennepin's reputation was damaged by his lack of complete honesty, such as claiming he also traveled all the way down the Mississippi to its mouth. Time would not have permitted such a journey, and his description was cribbed from La Salle. Still, for those locations he visited, he was often the first and he provided readers with the first information about these distant places. Priced at CN $25,000 (Canadian dollars, or roughly US $19,807).

Long before Hennepin came to America, the Englishman Thomas Gage arrived, though his travels took place south of the U.S. border. Gage came in 1625, which was not early for a Spaniard to visit Central America, but a first for his countrymen. The Spanish, fearful that knowledge of the their Central and South American colonies would make it easier for other countries to loot them, kept foreigners out. However, Gage had gone to Spain in 1612 where he abandoned his Anglican faith and joined up with the Dominicans. Still he would not have been permitted to travel to their colonies, so Gage had to be smuggled on board a ship. He would serve as a missionary in Guatemala, but also traveled around Mexico and Central America. After a lengthy stay, Gage decided to go, leaving without telling his order, and returning to England. He then rejoined the Anglicans and served to advise the English on how to attack the Spanish colonies, his guidance being helpful when they attacked Jamaica in 1655. He accompanied the British to Jamaica and died there the following year. Item 24 is his book The English-American his Travail by Sea and Land: Or, a New Survey of the West Indies, containing a Journal of Three hundred Miles within the main Land of America, published in 1648. It was the most authoritative account of the Spanish colonies in America available to anyone outside of Spain at the time. CN $5,500 (US $4,358).

Item 18 is a story of surprising bravery by part of the crew of the British East Indiaman the Sussex: A Genuine Account of the Ship S-----x, in the Service of the East India Company. It was written by the survivor, John Dean, and published in 1740. The Sussex was sailing home off the coast of Africa when struck by a violent storm. The Captain, officers, and most of the crew decided it best to abandon the ship and ride home with a sister ship. However, 15 of the crewmen believed the Sussex could be saved and chose to remain with her. Over the course of four days, they steered her to shore in Madagascar and repaired the boat. They set out home, only to hit a rock and begin a slow descent to the bottom of the sea. Eight of the men decided to get on the pinnace, a small boat used to visit other ships or shore, while the others thought their chances better remaining with the Sussex. They were wrong. Still, three of the eight were washed away, while after a harrowing 17 days, the remainder made it to shore. Three of those men died in Madagascar, and the fate of another is unknown. All we know is that Dean was the sole survivor to make it back home, where he wrote this account. The East India Company evidently valued his bravery and service, granting him a generous pension and naming him a company official. Dean died in a hospital in 1747. CN $2,500 (US $1,977).

Here is a most remarkable letter, though with few ties to North America. Written in Italian, it is a letter from André-Hercule de Fleury, dated November 17, 1726, thanking Pope Benedict XIII for his appointment as a cardinal. He had already been a priest for almost half a century by the time. De Fleury was serving in the court when he was appointed tutor to King Louis XIV's great-grandchild in 1715. Since Louis' son and grandson had already died, his great-grandchild was his heir, and a few months later, at the age five, he ascended to the throne as King Louis XV. Cardinal de Fleury continued as tutor, and when the young king reached adulthood, he retained his great trust in his tutor. Despite Cardinal de Fleury's reluctance, Louis XV named the recently appointed Cardinal his Chief Minister, though de Fleury was now 73 years old. Nevertheless, Cardinal de Fleury served a long term in this position, during which he repaired France's tattered finances and mostly kept her out of war (particularly with England), though at times he could be a bit heavy handed. Cardinal de Fleury died in 1743, at the age of 89. It is likely he was effectively France's ruler during much of his incumbency, and his years are generally regarded as the most successful of Louis XV's rule. The King did not appoint anyone else as Chief Minister after de Fleury's death. Item 22. $350 (US $276).

Here is an opportunity for collectors on a more limited budget. It is a collection of Annual Closing programs for the Carleton School for Girls in Ottawa. There are eight of them (just $6.25 each) from the years 1922-1926 (three are duplicated). It was founded in 1905 on the site of a previous girls' school whose head had committed suicide. Miss Claribel Smith wasted little time in taking over the property, though she moved the school five years later to her home on Argyle Ave. The school must have been a success as it remained in operation from 1905 until sometime in the early 1930's when it closed due to the death of Miss Smith. It was out of business by 1934 as by that time the building was occupied by her sister, Winnifred, who was renting out rooms. The property was sold to the government after Winnifred died in 1943 and as best I can tell there are currently apartments on the site in the Centretown Heritage Conservation District across from the Canadian Museum of Nature. Item 46. CN $50 (US $39).