Catalogue One from Peter Grogan 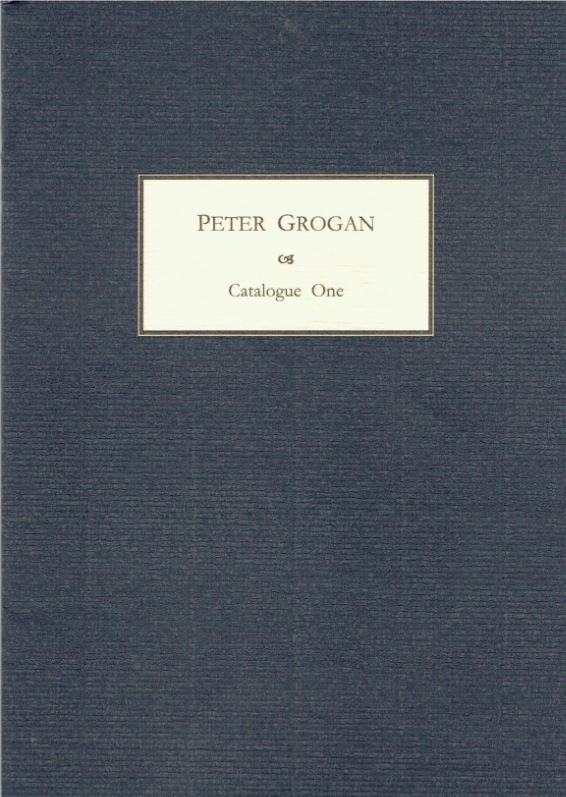 Catalogue One from Peter Grogan.

This catalogue arrives in the spirit of new beginnings. It is Catalogue One from Peter Grogan of London. Mr. Grogan is hardly new to the book trade and is an established ABA member, but has recently begun to work independently. He is also an author of what might be called "spiritual" books. He is an expert on wine and other spirits. One doesn't need to be a reader to appreciate his books. However, we will now focus on his role as bookseller, and the 100 titles he is offering in this first edition.

Well, here is a man who enjoyed his spirits. Unfortunately, this Irish writer enjoyed them far too much. No, we are not talking about Dylan Thomas. We'll get to him later. Item 4 is a collection of six press photographs of the noted playwright, poet and novelist Brendan Behan. He was the author who described himself as "a drinker with a writing problem." Behan, who wrote in both English and Irish, was active during his youth in the Irish Republican Army. What the IRA accomplished for him was a few years in prison, but that in turn provided him with material he would use for the "problem" aspect of his career. His play The Quare Fellow, based on prison experiences, would launch his career which, though successful, was all too short. He may well have been better known during his brief ascendancy for his intoxicated behavior than his writing. His writing may have made it into the book sections of the newspapers, but his public performances, as these photos attest, made it to page 1. They come from the reference library of the San Francisco Examiner, and they contain captions such as "charged with drunkenness, assault and disturbing the peace," and "described as a disorderly person seeking publicity." Unfortunately, the drinking became such a part of his persona and publicity it went from bad to worse, and he collapsed in a bar one day and died a few days later at the age of 41. Priced at £750 (British pounds or about US $1,167).

Next we turn to another Irishman, a man who wrote about life in his native land though he left as a young man, and after several trips back over the next decade, never returned again. James Joyce would instead live in Trieste, Paris, and Zurich, though this, his masterpiece, was set in, and provides a detailed description of Dublin. Item 52 is a first edition of Ulysses, published in 1922. It is a book that takes longer to read than the one day in 1904 it describes. Parts of the book had been published serially ahead of this date, but this was shut down in America as a result of obscenity laws. Most publishers wouldn't touch the book, so Joyce turned to Sylvia Beach and her Shakespeare and Company in Paris to produce this first edition. Paris was, naturally, more open to such writing than its English-speaking counterparts. £37,500 (US $58,393).

Item 59 is a copy of the Compleat Angler, the fishing classic by Izaak Walton, first published in 1653. I have no idea what number edition this is but it is far removed from the first, having been published in 1931. It is not the edition that makes this copy interesting. It's the inscription, which brings us back to James Joyce. Edmund Brauchbar was a Zurich businessman who had been a student of Joyce years earlier. Brauchbar later moved to New York, but the two remained friendly. During the 1930's, Joyce helped Brauchbar assist Jewish refugees, including Brauchbar's nephew, emigrate to safer countries. In 1936, Joyce inscribed this copy of Walton's book to Brauchbar. Brauchbar did not forget Joyce's friendship and in 1939, when the latter decided, with war looming, it would be safer to return from Paris to Zurich, Brauchbar put up the large financial guarantee Swiss authorities demanded to allow Joyce to establish asylum in Switzerland. At that time, Joyce wrote Brauchbar saying, "I thank you very much for having remembered me when so many seem to have forgotten." This significant association copy is priced at £5,500 (US $8,564).

This doesn't sound like a title from England's Poet Laureate – A Handbook on Paint. John Betjeman was not yet anyone's Poet Laureate when he wrote this piece on behalf of the Silicate Paint Company with architect Hugh Casson in 1939. Betjeman had studied architecture, and from 1930-1935 was an assistant editor at the Architectural Review, so while he was also writing poetry, he wrote freelance material at the time. That included a group of travel guides to British historical sites financed by Shell Oil along with this book expressing his thought on interior design, including color schemes, of obvious interest to a paint company. Item 5. £950 (US $1,479).

Item 88 is a letter from Dylan Thomas to Elizabeth Reitell. Ms. Reitell and Thomas had an affair while he was in New York during the spring of 1953, the last year of his life. She worked for Thomas' U.S. agent. The letter is dated June 13, and he begins, "Liz love, I miss you terribly much." He then writes about his flight home and how the lady next to him got sick on the plane. He arrived in London on Coronation Day, "and for all the customs men cared I could have packed my bags with cocaine and bits of chopped women." Ms. Reitell was with Thomas when he collapsed on November 4 of that year after returning to New York for a reading tour. She spent much of the next 5 days with the married Thomas at the hospital before he died on the 9th. £7,500 (US $11,678).