Antiquarian Books on Agriculture, Bibliography, and More from Jonathan A. Hill Bookseller 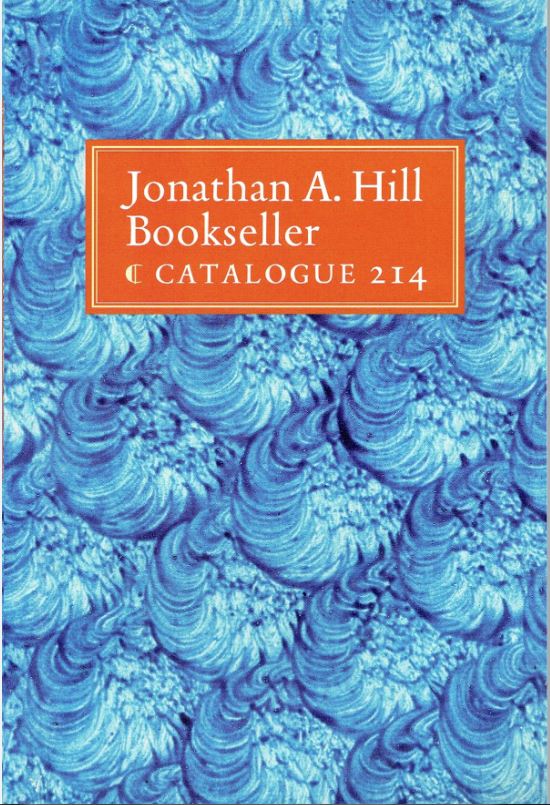 Catalogue 214 from Jonathan A. Hill Bookseller.

Jonathan A. Hill Bookseller has released Catalogue 214 – Mostly Recent Acquisitions. There is no descriptive title, but here is what we found. These are overwhelmingly English and European books. The majority are in the English language though certainly not all. They can easily be called "antiquarian," coming from the 19th century or earlier. A couple of topics stand out. There is much in the way of bibliography, including many of a genre closely related – auction catalogues of important book sales. If we turn the clock back 200 years or more, we find there were some magnificent and incredibly large collections, and they regularly made their way to the auction rooms when their owners made their exits from this world. There are also a large number of books in the field of gardening, and plant and animal husbandry. Some of it was decorative, but most of these works are focused on gaining the most crops from your fields. Then, other topics also appear in smaller numbers, including science, medicine, anatomy, and health. Here are a few samples of the 100 books to be found in the pages of this catalogue.

We begin with the first book from noted English agricultural writer (some say the greatest ever) Arthur Young. He didn't start out that way, instead writing some political pamphlets, attempting to start a magazine, and training to be a merchant. However, after his father died, his mother called him back to their small country estate. Young began to farm, experimenting in ways to improve production. In 1867, he published his first book, The Farmer's Letters to the People of England: containing the Sentiments of a Practical Husbandman, on various Subjects of the utmost Importance... In time, Young would write a great many more books, mostly on agriculture, and come to view this first attempt as more of a testament to his ignorance than his knowledge. It was at this time that Young purchased a larger farm and began conducting more experiments. Item 93. Priced at $2,500.

In 1768, Young published the first of his touring books. It was here that Young's reputation as a writer began to grow, and become a greater means of making a living through farming than by farming itself. Item 95 is A Six Weeks Tour, through the Southern Counties of England and Wales. The book was primarily focused on agriculture, as Young conducted surveys of what other farmers were doing on their land. However, he also wrote about economic and political issues, speaking about the economics of labor and provisions, and of the conditions of the poor, and of those on the other side of the income line. Young published a "six months tour" of northern England two years later (also offered in this catalogue), as well as tours of eastern England, France and Ireland. Several of his other agricultural works are also available in this catalogue. $1,750.

Item 28 is a catalogue of a vast library, Index Bibliothecae..., which in effect made it one of the earliest bibliographies. The library's owner was Francesco Barberini, progeny of a wealthy family that became even wealthier due to the position of Francesco's uncle. In 1623, his uncle was elected Pope, serving the next 21 years as Pope Urban VIII. Urban took care his family. He elevated his brother and two of his nephews to be cardinals, including young Francesco, then 26 years old. Francesco benefited financially from his position, becoming a patron or the arts and building his massive library. Along with books it included many ancient Greek and Roman manuscripts. When his uncle died, the new Pope sought to diminish the Barberinis wealth. They were forced to flee to exile in France, but in time, with the help of a marriage uniting the new Pope's family and theirs, all was forgiven. While Cardinal Barberini made the most of papal nepotism to advance his personal interests, in his defense it should be noted that he was one of only three judges in Galileo's second trial who refused to sign his sentence, and then worked to see that the great scientist lived his remaining days in comfortable surroundings, rather than being shipped off to a monastery. When Cardinal Barberini died in 1679, the library contained 60,000 books. This 1681 catalogue, which was written in then-revolutionary alphabetical order by name, covers the books. A planned catalogue of the manuscripts was never published. This catalogue is very rare in the marketplace. $22,500.

This next item takes bibliography one step further. It is Dissertation sur les Bibliotheques avec une Table Alphabetique... Hill notes that it is more than a catalogue of collections in France and elsewhere, but is, in effect, a bibliography of bibliographies. This copy is bound together with Table Alphabetique des Dictionnaires..., the first bibliography of dictionaries, with about 1,000 titles. Both were the work of Jacques Bernard Durey de Noinville and published in 1758. Item 40. $950.

Item 14 is the rare auction catalogue for Bibliotheca Fageliana. A Catalogue of the valuable and extensive Library of the Greffier Fagel, of the Hague. The sale was set for March 1, 1802, beginning "precisely" at 12:00, to be handled by Mr. Christie. It never happened. Greffier (a diplomatic post) Henrik Fagel was the inheritor of the Fagel family library that had been built over almost two centuries. After his country was overrun by French revolutionaries for a time, he was able to return. Fagel, in financial straits, decided to ship his library off to London to be sold. The catalogue was prepared and the auction set. However, funds were raised on behalf of Trinity College in Dublin to purchase the entire library, with the result that the almost 10,000 lots were sold together without benefit of an auction for £8,000. The collection still resides at Trinity in Dublin. $3,000.