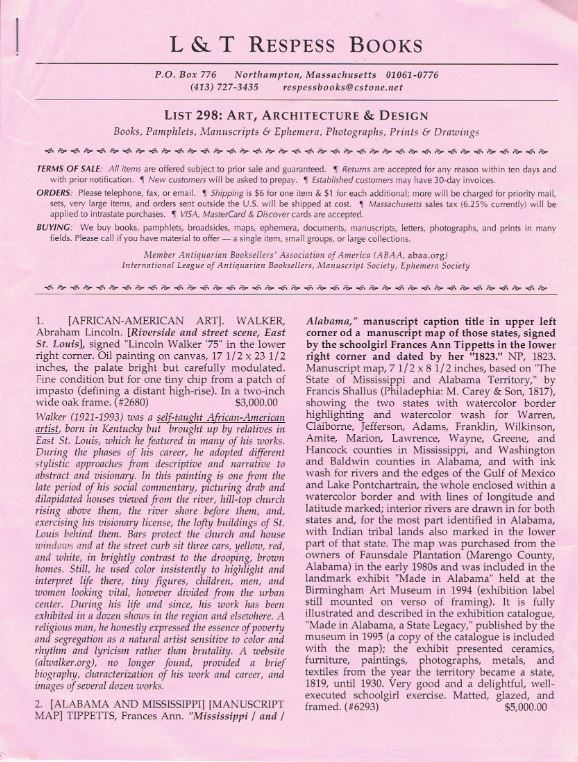 L & T Respess Books has published their List 298: Art, Architecture & Design. Books, Pamphlets, Manuscripts & Ephemera, Photographs, Prints & Drawings. It is always helpful when catalogue titles are also descriptive, rather than just a number leaving it to us to try to come up with a description. Thank you. We can now proceed directly to mentioning a few of the items you will find in this selection.

We begin with a work that combines a great writer with a notable painter. Item 122 is a copy of Ulysses by James Joyce. Originally published a bit over a decade earlier, the Limited Editions Club came up with an idea for what had now become recognized as an important novel. In 1935, they hired the noted artist Henri Matisse to provide illustrations for an edition of Ulysses. It was printed in a run of 1,500 copies, signed by Matisse. Around 250 copies were also signed by Joyce, and this is one of those copies. Priced at $11,000.

This man is better known for other roles he played, such as President of the United States and author of the Declaration of Independence, than for being an architect. Nonetheless, an architect he was, as this 1931 book by I. T. Frary describes: Thomas Jefferson, Architect and Builder. Jefferson, in this role, is best known for designing and building his personal estate, Monticello. Basing it on classical designs, Jefferson added touches to serve his particular needs. However, he also designed other structures, including those at the University of Virginia. Supporting the university would be the primary focus of his efforts late in life. Frary, who has signed this copy, wanted to visit and photograph Jefferson's architectural creations. This book contains illustrations from photographs and plans, and the copy comes in the uncommon dust jacket. Item 110. $225.

What was the greatest invention of the 19th century? It was not what you think, at least not according to John Fry of Knoxville, Tennessee. As this 1870 broadside proclaims: Attention, Millers! The Greatest Invention of This 19th Century, Electricity and Telegraphy not Excepted, Is John W. Fry's National Chemical Mill Burr Dress. He couldn't say this if it weren't true, could he? I will not attempt to explain what a mill burr dress is since I don't understand it, but it has something to do with machinery for milling grains. Fry encourages millers to buy his burr dress for their milling equipment, as it will enable them to dress a four-foot run of mill burrs in 30 minutes for just 20 cents. Presumably that was a good deal. I do not know how important this obscure invention was in the 19th century, but I don't believe its impact has been as significant as that of electricity or telegraphy. Item 182. $750.

Here is another new invention that seems to have fallen by the wayside. Item 3 is a broadside headed, Durden's Iron Bridge. The following is a description of a new Iron Bridge, invented by the Subscriber, and for which a patent was granted on the 1st of June, 1858. Thomas Durden, the inventor, hailed from Montgomery, Alabama, and perhaps the soon intervening Civil War interfered with his developing his invention. Or maybe, his bridge just wasn't that great an idea. As best I can tell, his bridge had an arched bottom with iron tubes placed crosswise under the roadway. Apparently this did something good though I'm not sure what. Perhaps it helped withstand buckling. Durden was looking for financial backing as he advises, "individuals or companies who wish to invest in an enterprize that will pay, can do so by addressing me in Montgomery, Ala." $850.

Next we have Thirteen hand-colored lithographic views, sweeping panoramas and bird's-eye aspects, of cities and other scenes in the United States and Canada. These mounted images were produced during the 1860's by Charles Magnus & Co. of New York. Respess notes that each is a "beautifully-colored sharp view within a wide gilt border." New York State gets the greatest number, with two of the city plus Syracuse and the Saratoga area. Boston, Providence, and New Orleans are all represented. However, for Maryland and Virginia, the choice has been to picture their lunatic asylums. Interesting choice. Item 9. $1,500.

We conclude with an original signed painting by Charles Robert Knight. Knight's works can be found in some of the greatest museums in America. However, they aren't necessarily the type of museums you might expect. Rather than in art museums, his paintings can be found in some of the finest natural history museums. They are in the American Museum of Natural History in New York, the National Museum of Natural History in Washington, the National Zoo, the Field Museum of Natural History in Chicago, the Peabody Museum of Natural History at Yale, and the Carnegie Museum of Natural History in Pittsburgh. Knight was a specialist painter. He drew extinct animals. Safe to say, Knight was not painting from life, which was just as well as he was legally blind. What he did do was artistically put flesh on the bones of dinosaurs and other animals from the distant past. His paintings can be found in numerous science and other books, as well as magazines such as National Geographic. It is from Knight's drawings that many of the images we have in our minds of dinosaurs and the like were formed. Knight had an amazing skill at putting bones together to create a (hopefully) realistic picture of these ancient animals. This one depicts one the most recent animals in Knight's repertoire. It has been called Woolly Mammoths in a Blizzard, painted in 1949 (Knight lived from 1874-1953). One mammoth is crouched in the snow, eyes closed, obviously cold, while the other has his head raised in an appearance of bravado against the frigid air. Item 115. $4,500.