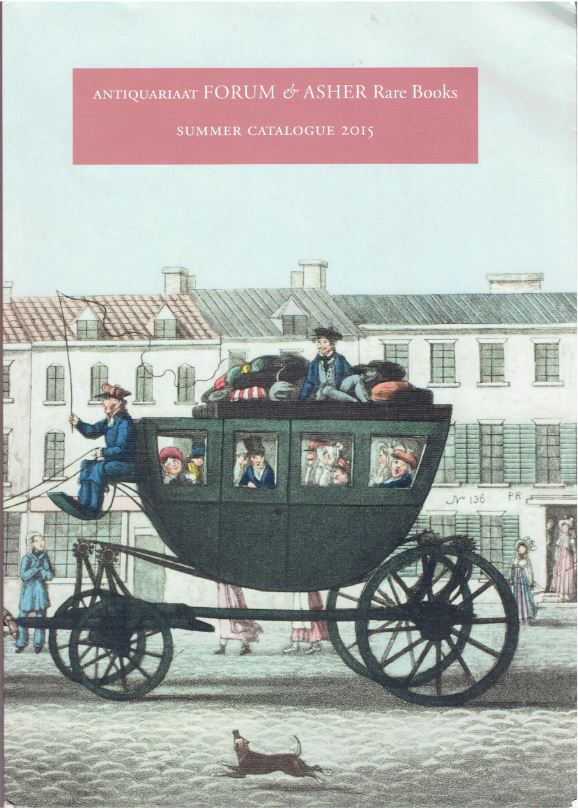 The Antiquariaat Forum and Asher Rare Books have issued their Summer Catalogue 2015. What is in it? Here is their listing of subjects – architecture, art, autographs, book history, cartography, education, exploration, history, hunting, law, literature, maritime history, medicine, military history, natural science, philosophy, religion, science, sports, technology. There can't be too many books that don't fit into one of those categories. Here are a few of the books to be found in this collection.

We begin with what is always a favorite topic – pirates! This is probably the most important of pirate books, an account of the true pirates of the Caribbean. Alexandre Exquemelin was a Frenchman who went to the Caribbean as an indentured servant. He learned the skills of a barber and a surgeon, an odd combination today but common at the time (both required cutting skills), but when his servitude expired, he signed on with the famous pirate Henry Morgan. For five years he plied the seas in his illicit trade before he returned to Europe to adopt literary and other more respectable pursuits. In 1678, he published this first edition of his tales, the first being written in Dutch – De Americaensche zee-roovers. This is really the only reasonably good resource about pirates in the 17th century. The book recounts how pirates went about their business, tells of their weapons and provisions. It quickly became a very popular book, pirates evidently fascinating people of the 17th century as much as they do those of the 21st. The book would go on to be published in many languages, with the tales being adjusted in accordance with the perceived desires of each audience. Obviously, not everything can be perfectly accurate under such circumstances and Exquemelin was not a perfect journalist, but this first edition is likely the least adjusted for its audience and the most accurate description of what it was like to be a pirate during this time. Item 64. Priced at €45,000 (euros, or approximately $49,815 U.S. dollars).

Here is a booklet about another pirate, except that he operated with the blessings of Queen Elizabeth, so he became a knight and is officially referred to as a "privateer" instead. Sir Francis Drake stole from Spanish ships, which was fine with Elizabeth because he took in a lot of valuables and shared them with his Queen. However, this book pertains to a later mission of Drake's. After his success at pirating, Drake was appointed a vice-admiral and was a participant in the defeat of the Spanish Armada in 1588. This led an appointment the subject of this booklet – Drake and Sir John Norris were sent to destroy the remnants of the Spanish Armada, overthrow the King of Portugal (who was also King of Spain), and capture the Azores. This one didn't turn out so well. The English expected the Portuguese would rebel against their King, but it didn't happen. Between storms, disease, and a stronger defense than expected, the British were unsuccessful in achieving any of their goals. Item 55 is Brevis et fida narratio, et continuatio rerum omnium a Drako et Norreysio, an attempt to put a good face on a failed mission. This is a second edition, published in 1590, the first one published outside of England (Frankfurt). €25,000 (US $27,651).

Next up is what appears to be a first edition and the only known such copy of a tale that is either a miracle or not entirely true: Verissima relacion embiada a Don Fray Andres de S. Maria Obispo de Cochin... It was taken from a manuscript account by Andres de Santa Maria, the Cochin Bishop in Goa, and published in 1609. According to the story, an Islamic beggar, a 380-year-old man whose hair was still black and whose teeth had fallen out twice but grown back, had, as a young man, spotted what appeared to be a Christian monk on the other side of the Ganges River, seeking help to cross. Being a gentleman, he helped the man across the river, whereupon the latter revealed himself to be St. Francis of Assisi, who rewarded his helper with a pledge of youth, good health, and black hair until the end of his life. Presuming the Bishop heard about the man a few years earlier, the timing holds up well as St. Francis died about 380 years prior to the book being published. However, there is no record of St. Francis ever traveling east of the Holy Land. Whatever happened to the beggar, or whether he is still alive, is unknown, or perhaps none of this is really quite so verissima as the title claims. Item 163. €18,500 (US $20,454).

Item 112 is the most important book of internal exploration in America, Travels to the Source of the Missouri River and Across the American Continent to the Pacific Ocean. This is the official account of the famous Lewis and Clark expedition, authorized by President Thomas Jefferson to explore the newly acquired Louisiana Territory. Jefferson sent Meriwether Lewis and Joseph Clark up the Missouri to find its headwaters, and across the Northwest to find out what was there and begin trade with the natives. This is a copy of the "corrected" London edition of 1815 (however, this second London did not correct the misspelling of Clark's name as "Clarke"). The first edition was published in Philadelphia the prior year, followed by a London edition. This one is a year later, but sells for around 10% of the cost of the first. Importantly, it contains all the maps, including the large fold-out. €10,500 (US $11,601).