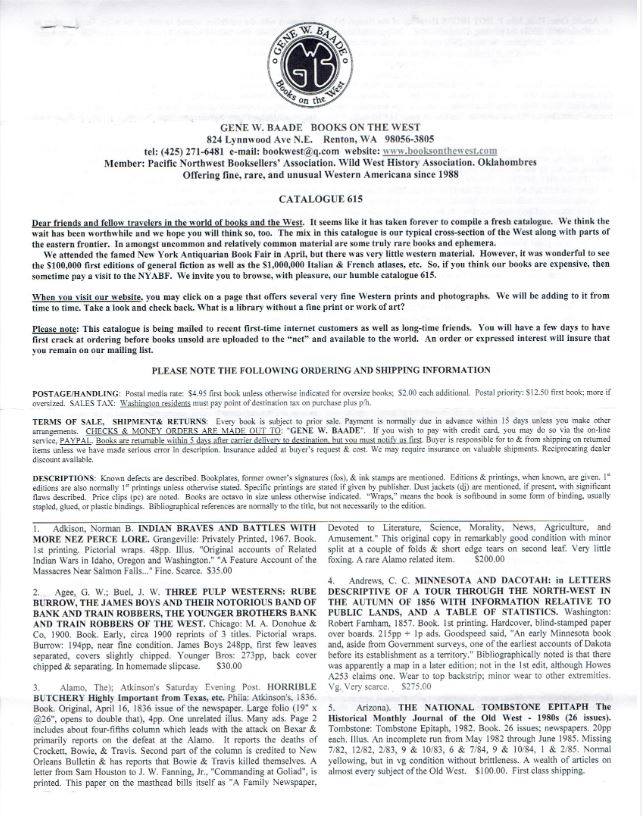 Gene W. Baade Books on the West has issued their Catalogue 615. This catalogue will appeal to collectors of the West who never struck that vein during the Gold Rush. Nothing is priced in four digits, except when there is a decimal point in the middle, and only a few exceed double digits. Most books describe the West of the 19th century or early 20th, before old gave way to new. Once cars replaced horses, barbed wire replaced the open range, and guns became a recreation rather than a survival tool, the Old West was over. Still, it lives on in our memories and in these books. Here we go.

If we were responsible for our neighbors' behavior, Homer Croy would have been in deep trouble. Item 31 is a copy of his 1949 book, Jesse James Was My Neighbor. Well, sort of, but not really. James died the year before Croy was born. Nonetheless, Croy did grow up in the same part of Missouri where the James family lived, and as such, he spoke with many people who knew James personally. The result is that he does capture the essence of the man in this biography. The book comes with a humorous letter from Croy concerning its obtainability, and a news clipping on the death of 109-year-old James Russell Davis, a member of the James Gang. He had just testified at a 1950 hearing that youthful (102 years old) J. Frank Dalton was really Jesse James. Most believe James died after being shot in the back in 1882, but Dalton has his believers. Priced at $125.

Item 140 is a book by J. D. B. Stillman though it is the photographer's contribution that is notable: The Horse in Motion as shown by instantaneous photography with a Study on Animal Mechanics founded on the Anatomy and the Revelations of the Camera in which It is Demonstrated the Theory of Quadrupedal Locomotion, published in 1882. The photographer was Eadweard Muybridge. Muybridge was a photographer of the West, who had photographed scenery, Indian battles, landmarks and the like. He was one of the best. However, his focus changed when Leland Stanford, a former California governor (for whom Stanford University is named) hired him to settle a bet. The issue was whether all four of a horse's feet are ever off the ground at the same time while trotting. There were debates over this issue (as well as while the horse is running), but the eye is not quite quick enough to determine the answer with certainty. Muybridge set up a series of cameras that would take numerous pictures at tiny intervals as the horse trotted by. Ultimately, he was able to establish through a specific frame that yes, indeed, the horse's feet were all off the ground at a particular moment. Stanford asked his friend J. D. B. Stillman to write the text to go with 100 of Muybridge's photographs. This ended in a split between Muybridge and Stanford as Muybridge felt he was given little credit in the book. However, he would then go on to focus his career on photographing animal locomotion, taking tens of thousands of photographs. He published several works on the subject after this book, some very well known and valuable today. He also produced a machine that could display the photographs in rapid succession. It created the impression of motion. Muybridge had developed a precursor of motion pictures. $650.

Item 3 is a newspaper with a contemporary account of the Battle of the Alamo. It is the April 16, 1836 edition of Atkinson's Saturday Evening Post, and if April 16 doesn't quite sound contemporary for a battle which ended on March 6, in those days, it took that long for information to wind its way back to Philadelphia. On the second page, the Post reports on Horrible Butchery. Highly Important from Texas. The article first covers the early slaughter of the Texians at Goliad, followed by the massacre at the Alamo. The newspaper's pro-Texian position is clear, claiming more than 1,000 Mexicans had died (an exaggeration though many did), while pointing out that Jim Bowie, Davy Crockett, and William Travis had all died. Only two people (it was actually a few more), were spared, a woman and Travis' Negro slave, who were sent to Sam Houston to encourage the Texians lay down their arms. The Post quotes Houston as responding to Santa Anna, "you have succeeded in killing some of our brave men, but the Texians are not yet conquered." Santa Anna believed the defeat would discourage the settlers and lead them to flee Texas, but the effect was the opposite. The Post correctly noted that it led more of them to take up arms to overthrow Mexican control. Just five days after this article was published, in a stunning reversal, the Texians thoroughly defeated Mexican troops at San Jacinto, captured Santa Anna, and forced him to grant independence to Texas. $200.

Next up is a printing of Four American Indian Songs from 1909 by a once popular American composer who seems to have vanished into time. Charles Wakefield Cadman was a prolific writer of songs, operas, and orchestral pieces during the first half of the 20th century. Unlike most of his contemporaries, he avoided European influences, focusing on American sources, most notably those of the country's natives. He was closely associated with the musical "Indianist Movement." Cadman spent a substantial amount of time with the Omaha and other tribes listening to their music, which became a base for many of his works. Among these four songs is the one probably best remembered of the hundreds of works Cadman wrote – From the Land of the Sky-blue Water. Does that sound sort of familiar? Certainly, if you are from Minnesota or the upper Midwest that must ring a bell. It was for years the song/jingle used in the Hamm's Beer commercials. Hamm's rewrote the lyrics. It was a favorite of the Hamm's Bear. Sadly, Hamm's ceased to be an independent brewer in 1968, and has been passed around through numerous owners since, currently made by Miller. I don't know if they still use sky-blue Minnesota water, whether the song is still used, the bear still dances, or whether the beer tastes the same as it did in the 1960's (it was decent back then). It is now a regional brand sold only in someone else's region. It is more a memory, like Cadman's music. Item 18. $135.