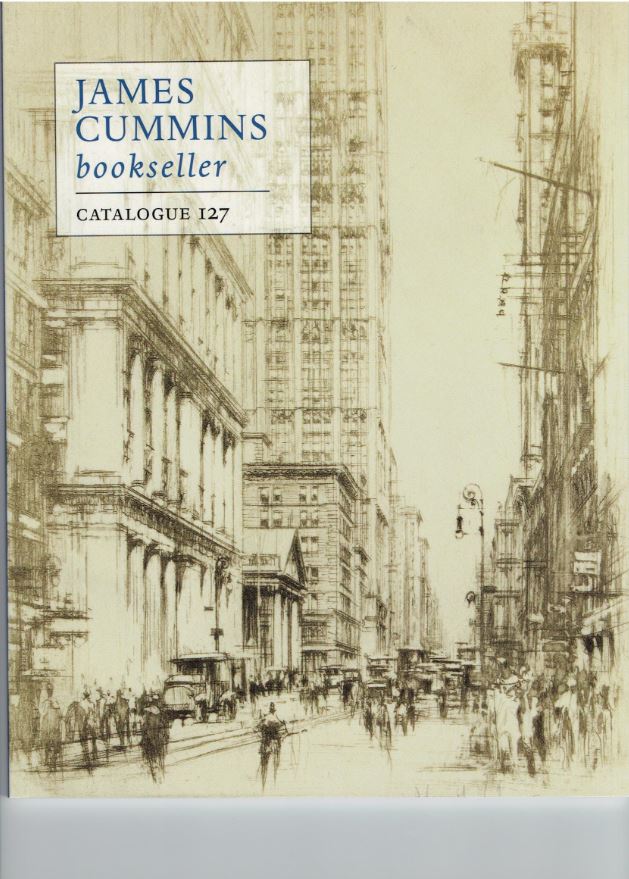 James Cummins Bookseller has published Catalogue 127. Those familiar with Cummins' catalogues will recognize the format. It offers a mix of items, historical to fictional. Many items are books, while other are various other forms of paper – drawings, letters, photographs and documents. The common thread is that the material is significant and appropriate for serious collections. Here are a few items from #127.

We start with one of many books by an American writer who who deserves far more recognition then he gets today, though he was once much better known. William Wells Brown was a remarkable man. Born a slave, he managed to escape north, where he taught himself to read and write. He was a contemporary of the much better known Frederick Douglass, with whom he shared a similar background. Brown became a writer and an abolitionist, a nation's conscience as he wrote forcefully of the evils of slavery. During the 1840's he worked on a steamboat near Buffalo, which he used to help runaway slaves across Lake Erie to freedom in Canada. In 1849, Wells and his two young daughters traveled to Europe. He wanted his daughters to gain an education while he lectured audiences about the horrors of slavery. He found a more receptive audience than in America. In 1850, the Fugitive Slave Act was passed, which would have put Brown at risk of being captured and returned to slavery had he returned home. He chose to stay in England. He wrote Clotel, believed to be the first novel published by an African-American (it was published in London). In it, he writes of Thomas Jefferson's black daughters (speculation until confirmed by DNA testing a century and a half later). Brown expounds on the hypocrisy of white leaders such as Jefferson who wrote of freedom while owning slaves (Brown's father was also a white man, a cousin of his owner). In 1852, Brown wrote a travelogue of his time in Europe. Item 13 is a copy of that book: Three Years in Europe or, Places I Have Seen and People I have Met, published in 1852. In 1854, after a British citizen officially bought his freedom, Brown was able to return to America where he continued to write and speak out for abolition, and continued to write about the contributions of his people after slavery was finally abolished. Priced at $2,000.

With the football season only a few weeks away, we get to look back to a time long before it was America's favorite sport, at least to watch. Item 21 is Walter Camp's Football Records of American Teams, published in 1883. This is a compilation of records from the first season played under modern football rules. It was compiled by Camp, known as “the Father of American Football.” Among the new rules he introduced were the line of scrimmage, snap from center, the system of downs and scoring, a 100-yard long football field, and a reduction in the number of players from 15 to 11. Camp played for Yale, then a powerhouse, through the 1882 season and later coached his alma mater's team. In his introduction Camp notes that this book will help next year's managers from having to sort through all the correspondence concerning rules. Along with the rules, it contains records of 23 college teams dating back to 1876. Item 21. $13,500.

Item 59 is a manuscript power of attorney that concerns two major figures from American Revolutionary history. In 1802, Congress, at the urging of President Jefferson, issued a major land grant to the Marquis de Lafayette. Lafayette was the Frenchman who came to America to serve Washington and the revolutionaries as a general in their fight for independence. Few foreigners, or many others for that matter, were more beloved by Americans. Along with expressing thanks, Jefferson hoped to entice Lafayette back to America. He left after the Revolution, returned for a visit in 1784, went back to France and never returned. Rather than being enticed back, Lafayette signed this 1804 power of attorney. It grants a power of attorney to James Madison, primary writer of the United Sates Constitution and future President, then serving as Secretary of State. It gives Madison full authority to manage the lands in his interests, Lafayette obviously having full confidence in Madison. Lafayette eventually did return to America, but not until 1824, when he visited every state, all of the living Presidents, including Madison, and met everyone who was anyone while being cheered by huge crowds wherever he went. $25,000.

I don't know if this is great literature or particularly realistic, but it certainly was popular. Item 15 is Tarzan of the Apes, a 1914 reprint. This copy comes with a 1938 inscription from author Edgar Rice Burroughs to “Jane,” more specifically, Maureen “Jane” [O'Sullivan] Farrow. O'Sullivan played the role of Jane opposite Johnny Weissmuller's Tarzan in the first six Tarzan films. The book comes with a publicity photo of Burroughs visiting “Tarzan” and “Jane” on the movie set. The book was inscribed in Tarzana, the ranch, now a community, started by Burroughs. $7,500.

Next is a book about a jungle, but not the one inhabited by Tarzan. Item 90 is The Jungle, by Upton Sinclair, published in 1906, a first edition, first issue. This is Sinclair's expose of the terrible sanitary conditions in the meatpacking industry, though it was meant to be an expose of the terrible working conditions of its laborers. Readers were more horrified to learn how unsanitary their meat was than how poorly the workers were treated. This copy is not only signed by Sinclair, but is also inscribed by author Jack London that same year. London was a socialist like Sinclair and in his inscription writes of the book, “it smashes a sledge-hammer blow for the Revolution.” London understood Sinclair's motives better than most readers. $9,500.