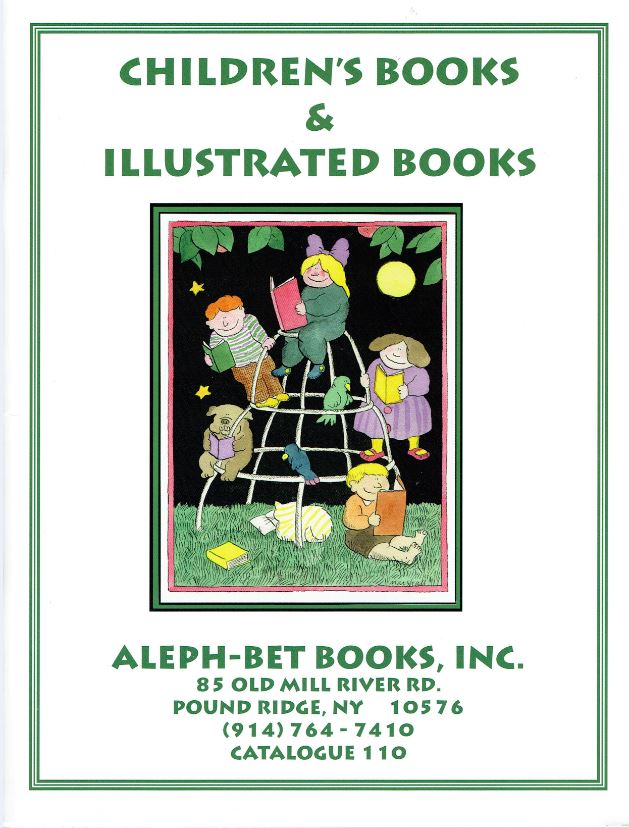 Aleph-Bet Books has issued their Catalogue 110 of Children's Books & Illustrated Books. Almost all qualify as both for children and illustrated. Many you will recognize from your youth. Perhaps they were new books at the time, from a Maurice Sendak or Dr. Seuss. Others may have been classics from an earlier time still popular, such as Beatrix Potter or L. Frank Baum. Others you may not recognize – older books that went out of style, in some cases because tastes changed, in other cases because evolving standards made them just plain offensive. Whether you collect what you knew when you were young, or what you didn't know then, you will find it here in this catalogue. Here are a few samples.

We will begin with one of those books that are offensive by today's standards, and should have been but were not in their time. Item 3 is Pickaninny ABC, a Dean's Rag Book published in 1905. This is not Uncle Remus or Little Black Sambo, however objectionable they may be. The alphabet begins with “A” for Alabama Coon, and has other stereotypes like “M” for minstrel and “W” for watermelon. The illustrations are grotesquely stereotyped black children. In case you are thinking this book must have come from the American South, you are wrong. It was published in London. Priced at $1,200.

Such gross insensitivity to different people was not a necessity for earlier times. Here is a book that's a century older, People of All Nations, a Useful Toy for Girl or Boy. This is a Darton and Harvey book, also published in London, in 1806. It depicts and pictures 26 people from various lands for each letter of the alphabet, and then 37 more not in alphabetical order. Some of the nationalities are obscure, such as Xalapaner and Janizaiy. Xalapan is an ancient site in Guatemala, Janizaiy, as best I can tell, something Turkish. “J” is for Jew, but instead of something anti-semitic, it says “This appears to be a dealer in clothes, the Jews were a very respectable people...” “V” is for Virginian, “...generally dressed after the manner of the English; but this is a poor African and made a slave of to cultivate the earth for growing rice, tobacco, sugar, etc.” While the description is sympathetic, the illustrator got it wrong, showing an American Indian with a feather headdress and long smoking pipe as the image of an African slave. Item 9. $1,850.

Here is another depiction of American Indians as strange as describing them as African slaves. Item 173 is “Our Indians.” A Midnight Visit to the Great Somewhere-Or-Other. The book was created by Luther Daniels Bradley, a Chicago Daily News cartoonist, in 1899. In it, a boy and girl are taken on a fantastic voyage by some Indians who bounce back and forth between realistic and the surreal. They are taken to the somewhere-or-other by canoe, but this is a flying canoe. The Indians serve tea in china cups like proper Englishmen, and they celebrate victories by playing band instruments and performing vaudeville acts. $2,000.

This is an unusual title: The Story of the String and How It Grew. The author of this 1916 book is Sam Plank. It features a piece of string threaded through small holes in the pages. The result is you can see an actual string running through various scenes illustrated on the pages. Item 344. $400.

Item 253 is an early schoolbook for Mohawk Indian children: Primer for the Use of the Mohawk Children, to acquire the Spelling and Reading of their own, as well as to get acquainted with the English Tongue. The Mohawk title indicates learning the spelling of their own language must have been next to impossible: Waerighwaghsawe Iksaongoenwa Tsiwaondad – derighhonny Kaghyadoghsera. This 1786 London edition of Daniel Claus' primer was taken from the Montreal first of 1781. However, the London is the first edition to have illustrations. A frontis mezzotint depicts Indian children at work in school. $18,500.

Item 449 is a look at one of the great advances in technology of a century ago – radio. Author E. Boyd Smith wrote numerous books for children, with this one being published in 1923: Fun in the Radio World. Regular broadcasting had only begun a few years earlier, but radio had spread quickly like it was the latest app. Smith, perhaps a bit fancifully, opines that radio can calm savages in far off lands, they being so amazed by the voices and music coming from apparently nowhere that they become almost mesmerized. $450.

Item 26 is a bit of unusual anthropomorphism. The title is Vegetable Verselets, written by Margaret Hays. Among the humanized vegetables are Mrs. I. Wrish Potato, Mistress Spinach, Master Radish, Polly Parsley, Rosa Rhubarb, Nurse Cabbage, and more. The humorous drawings are by Grace (Dayton) Wiederseim. She is best known for her drawings for Campbell's Soup. $450.