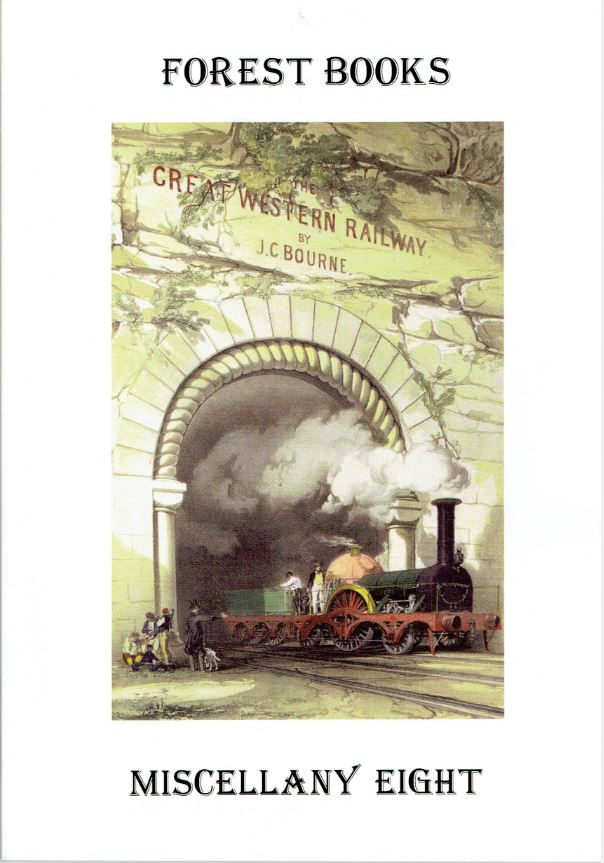 Forest Books has released their Miscellany Eight. Now for the long title, which will better explain what is to be found in a miscellany: A Catalogue of Rare and Curious Books, Pamphlets & Printed Ephemera on a Wide Variety of Subjects. Including: Agriculture, Architecture, Botany, Children's Books, Crime & Law, Cookery, Economics, Education, English Literature, Farriery & Equestrian, The Fine Arts, Genealogy, Geology, Horticulture, Ireland, Military & Naval, Natural History, Photography, Private Printing, Social Studies, Science & Medicine, Sporting Books, Technology, Trade Catalogues, Travel & Topology, etc. That is reminiscent of the titles of old books where, once you read the title, you pretty much knew everything that was in the book. All that is left now is to present a few specific examples of items to be found.

We begin with a description of one of the most remarkable works of art ever painted - not necessarily the best, just the most remarkable: Description of Banvard's Panorama of the Mississippi & Missouri Rivers, Extensively Known as the “Three-Mile Painting,” Exhibiting a View of Country Over 3000 Miles in Length...being by far the Largest Picture ever Executed by Man. John Banvard, a self-taught painter, was given to exaggeration. His painting likely was “the largest picture ever executed by man,” but it wasn't three miles long. Estimates are more in the one-quarter to one-half mile long range, still quite impressive for a painting. Banvard rolled his painting onto a scroll and traveled, first through America, then England, scrolling it along to display the length of the great western rivers. Wide-eyed viewers would see bluffs, isolated cabins, prairie grasslands with herds of bison, swamps, corn fields, cotton fields, plantations, slave quarters and huge mansions. In the days before moving pictures and television, viewers were still able to experience a trip down the mighty rivers. Versions of this description were earlier published in America, but this edition was printed in London for shows he put on there in 1848. His shows were very successful, but by the end of the 1850's, the public lost interest. Banvard took his painting home and stored it in the basement. In time, it deteriorated, and likely was discarded after his death. None of it survives. Item 162. Priced at £275 (British pounds or about $426 U.S. dollars).

Next up is an “execution sheet” from a sensational murder almost two hundred years ago. It created a slew of stories and songs at the time and for many years after. This sheet is headed Execution of William Corder, for the Murder of Mary Martin in the Red Barn. She is often referred to in other pieces as Maria Marten. Corder and Martin were lovers, but evidently Corder decided to get rid of her. They met at the “Red Barn” where he stabbed her and buried the body. It took almost a year, but after a dream by her stepmother, her father poked around the barn until he found her body. Meanwhile, Corder, who sent letters back to her family that she was doing fine in London, married another. When the truth was discovered, Corder was brought back home. He confessed and was hung in front of a very large crowd. Item 50. £345 (US $535).

In the mid-19th century, communications between Europe and North America were painfully slow. They were quicker than the previous century as ships had become faster, but it still took a good ten days for the fastest ships to deliver a message across the Atlantic. It was then that some clever individuals came up with the idea of laying a cable across the Atlantic. It could reduce the time of communications from ten days to a few minutes. The first cable was completed in 1858, but it quickly broke down. That led to an improved attempt that began in 1865 and was completed the following year. This new cable was able to establish reliable communications between the continents. Item 182 is an account of the laying of that cable, illustrated with colored plates taken from drawings by Robert Dudley. The text is from the author, W. H. Russell. Dudley made his drawings on board the Great Eastern, a massive ship that was the largest ship ever built when it was launched as a passenger ship in 1858, but never was financially successful in that role. The result was that it was converted for the mission of laying cable across the Atlantic. The book is titled The Atlantic Telegraph, and offered is a copy of the large paper deluxe edition with the colored (rather than tinted) plates. £2,995 (US $4,644).

Thomas Beddoes was a turn of the 19th century English doctor who did much good and meant well but did not always get everything right. Item 10 is his 1793 book Observations on the Nature and Cure of Calculus, Sea Scurvy, Consumption, Catarrh, and Fever. Beddoes had a theory that many illnesses were caused by either having too little or too much oxygen. Scurvy he attributed to too little oxygen, consumption to too much. Therefore, he promoted greater ventilation on ships where scurvy was a serious problem. He had it wrong about scurvy and yet his advice was good. Scurvy is caused by a lack of vitamin C, not oxygen, and yet many other diseases from which seamen suffered came from unsanitary conditions in closed quarters where greater ventilation was extremely important for better health. Beddoes did many experiments using inhalation of various gasses which he believed could cure diseases. Beddoes observed that butchers appeared less likely to get tuberculosis than the general population, which they attributed to the air in slaughterhouses. He applied this experience by building a cattle stall next to patients' rooms so the cows could breathe on them. It led to a fair amount of ridicule, though Beddoes believed it helped some of the patients. £245 (US $381).

Next up is a pamphlet relating to women's suffrage in America: Address upon Women's Suffrage in Wyoming, Delivered at Association Hall, Philadelphia, by Governor John W. Hoyt, (of Wyoming Territory, U.S.A.) April 3rd, 1882. Wyoming might not appear today to be a likely site for such a radical idea, but women in America first received the right to vote in the Wyoming Territory in 1869. When Wyoming became a state in 1890, it was also the first state to allow women to vote, and thereby the first opportunity for women to vote in a federal election. Item 94. £75 (US $116).