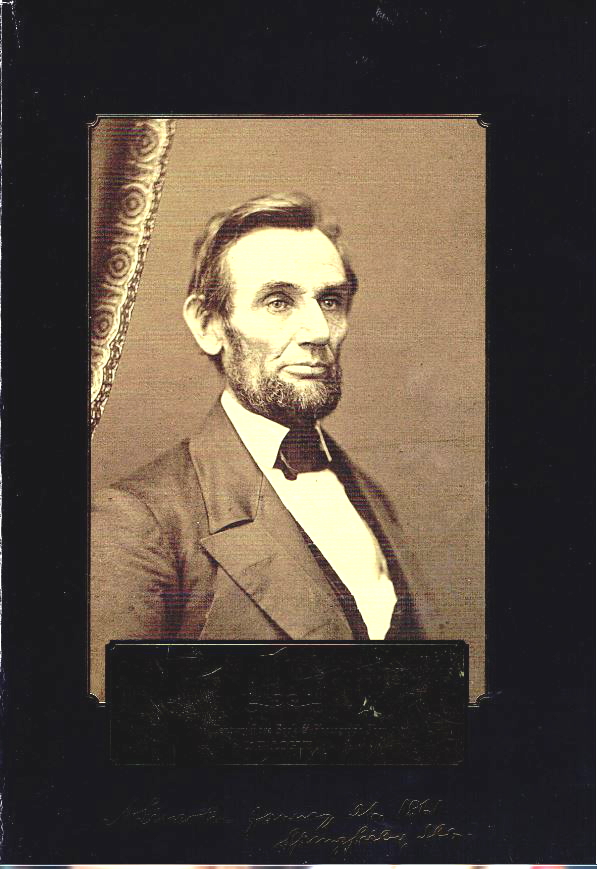 Lincoln in Springfield is among the magnificent books and photographs.

The 19th Century Rare Book & Photograph Shop has published a catalogue of Magnificent Books & Photographs. Offered is a selection of clearly magnificent books, photographs, and other works on paper. The catalogue is magnificent too. This is one of those rare, spectacular presentations designed to do justice to the material, which is top of the line. Descriptions are thorough, pictures are large and clear, and all of the material is suitable for the most important of collections. Here are a few examples of the type of material offered.

We begin with the item pictured on the cover of the catalogue. Everyone in America (or anyone who has handled a U.S. $5 bill) will recognize this portrait. It is, obviously, that of Abraham Lincoln. This is a large (6” x 8”) photograph of Lincoln taken by C. S. German in Springfield, Illinois, during January of 1861. That was during the time between Lincoln's election to office and his inauguration. Lincoln could only wait on the sidelines as the southern states began the process of secession even before he took office. This is a notable portrait of the soon-to-be President as it is the first of him with the full beard with which we recognize him today. Eleven-year-old Grace Bedell had written Lincoln that he would look better with a beard. Women like whiskers, she wrote, and they would convince their husbands to vote for him. This beard came a little too late to help in the election, but Lincoln followed Miss Bedell's advice and it certainly didn't hurt him later when he ran for reelection. Lincoln wanted the portrait taken for friends and it is inscribed by Lincoln. Priced at $275,000.

You can never have too many Lincoln portraits (or too much anything else Lincoln). This next even larger (15” x 12”) oval portrait was photographed by Alexander Gardner on August 9, 1863. Gardner took more portrait photographs of Lincoln than anyone else, and on this day, he took six of them. John Hay, Lincoln's private secretary, and many years later (under McKinley and T. Roosevelt), Secretary of State, accompanied Lincoln to the photography session that day. He selected this photograph for his personal possession. It is the only known example of it. It remained with the Hay family through most of the intervening years. $55,000.

Here is an important book, though one that rarely comes up in the market anymore. To call this “important” is the ultimate understatement. This is undoubtedly the greatest and most important piece of literature in the English language, perhaps any language. Second, third, and fourth folios still come up reasonably often, but First Folios are very hard to find anymore. Technically, this is Mr. William Shakespeares Comedies, Histories, & Tragedies, but the first edition is familiarly known as the First Folio. The book was compiled and published in 1623, seven years after the author died. Half of the plays had never been published before, and undoubtedly would have been lost but for their being saved by this printing. A couple of Shakespeare's associates realized this was about to happen and gathered both his previously published works and manuscripts of those that had never been published together for this book. Among those that would not otherwise have survived are Macbeth, Julius Caesar, and The Tempest. The 19th Century Shop notes that except for the Bible, “the First Folio comprises the most influential body of literature ever published.” Only 233 of a print run of perhaps 750 copies of the First Folio are known to survive, most in institutions, including an astonishing 82 copies at the Folger Library. Price on request.

One incredibly important book deserves another. This book comes close to being a Shakespeare of science. Copernicus and Galileo figured out the formulae for the paths of the celestial bodies in the sky, but did not understand the laws behind them. That was revealed by Isaac Newton, who realized the laws of physics observed on earth were the same ones at play in the sky. The planets were following their chosen paths because of the same gravitational forces that make an object fall to the ground. Newton first revealed his findings in this first edition of Philosophiae Naturalis Principia Mathematica, published in 1686. This copy is the “two-line” imprint first state (as opposed to the three-line version with the bookseller name). The two-line version was sold in England, the three-line in Europe. Printing and the Mind of Man has said of the Principia that it is “generally described as the greatest work in the history of science.” $785,000.

Next is a collection of the six carte-de-viste photographic portraits of the last surviving American veterans of the Revolution. Hartford photographers N. A. and R. A. Moore set out in 1864 to photograph the last surviving veterans, traveling to their homes as they would not be able to travel to their studio. This was during the height of the Civil War and they hoped that showing photographs of the survivors who fought to create the Union would stir more patriotic fervor to preserve it. The six ranged in age from 100-year-old William Hutchings to 105-year-old Lemuel Cook. Surprisingly, it was the eldest – Cook – who outlasted the others, dying in 1866 at age 107. The photographers also created a book with these photographs which is more commonly found, but the quality of these individual photographs is significantly better. $12,000.

This 7 3/4” x 12” broadside carries the bold heading $500 REWARD, but it is not for a thief or killer. The reward was for the return of a family of escaped slaves. Isaac Scaggs was displeased that they had tired of working for him when they departed in 1857. Adam Smith had escaped and his journey is recorded in the annals of the Underground Railroad. The 19th Century Shop notes that they are unaware of any other such posters linked to a documented escape through the Underground Railroad. Adam Smith was not content with just his own escape. He returned to Scaggs' farm a few weeks later and led his wife and four children to freedom too. The poster describes all of the members of the family, and promises $300 for Adam alone, or $500 for them all. $68,000.