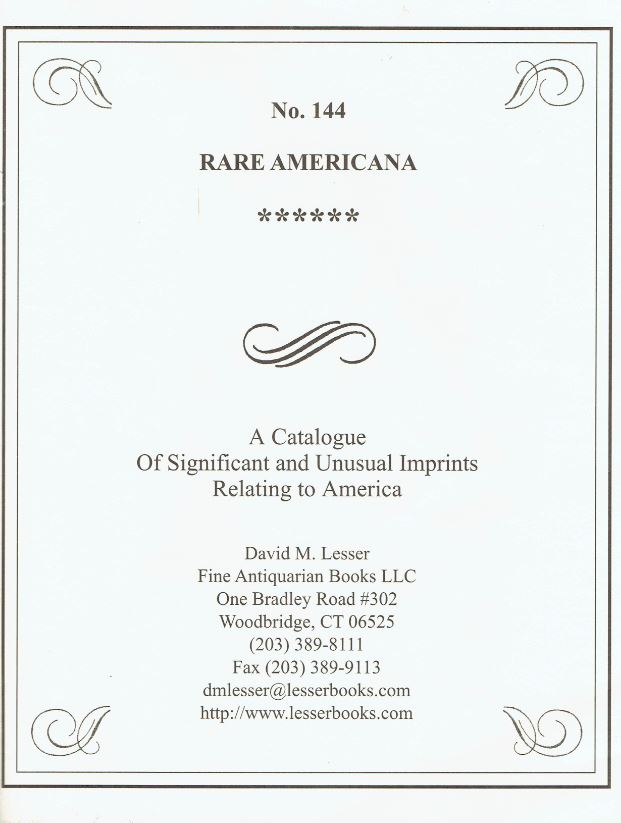 David M. Lesser Fine Antiquarian Books has released their No. 144 Rare Americana, or A Catalogue of Significant and Unusual Imprints Relating to America. These are primarily pamphlets, broadsides, and other shorter form material. They relate to current events in the land a century, or two, or three, ago. Here are some new ones Lesser has to offer.

This first item intrigued me as I had no idea what it was about: Proceedings of the First American Whist Congress, Held at the City of Milwaukee, April 14 to 17, 1891. What is whist? Turns out it's a card game. It was very popular in the 18th and 19th centuries, and reportedly is still played in Britain. In the 20th century in America, it was replaced by bridge among serious, tournament-type card players. Various whist clubs, spearheaded by the one from Milwaukee, arranged for a national annual tournament, and these were obviously quite popular in the 1890's. Reports were published during this period, but the last such record of one I could find came from a St. Paul newspaper describing the 1900 tournament. At that time, the paper noted that attendance was falling off and I do not know whether any such national meetings were held thereafter. Item 7. Priced at $375.

What was the most important American inaugural speech? Perhaps what immediately comes to mind is John F. Kennedy's “Ask not” speech, but this next one may be the most significant, at least for its legend. Item 66 is a broadside printed on silk of President Harrison's Inaugural Address. This is the first President Harrison, William Henry, and the speech was delivered on March 4, 1841. It was the longest inaugural address in American history, but Harrison's presidency was the shortest. A month later, Harrison was dead. Legend long blamed his demise on giving this long-winded address without hat or coat on a cold and rainy day, though the illness did not arise until several weeks later, the cause more likely being poor sanitation or some other unrelated event. Nevertheless, the traditional account makes a great story. In his speech, Harrison attacked the Spoils System raised to the highest level by his predecessors, Presidents Jackson and Van Buren. Harrison handily defeated the unpopular Van Buren's attempt at reelection, but when the popular new president died, his replacement, John Tyler, would prove to be even more disliked than Van Buren. Item 66. $175.

Next up, from the early days of the labor movement, is a previously unknown broadside that reflected government interaction with labor for a long time. Government did not like labor at all. Item 111 is headed Proclamation! by the Sheriff of Schuylkill Co. In it, the Sheriff of Schuylkill County, Pennsylvania, proclaims that all assemblies and other activities that interfere with anyone wishing to work under the terms of his choosing are unlawful, and commands justices of the peace to arrest such persons. What the Sheriff is talking about here is strikebreakers. The year was 1868, and coal miners worked long hours under dangerous and deplorable conditions. They were attempting to organize to demand better working conditions, but government was there to assist the mine operators in breaking union activities. $3,500.

Item 42 is an 1864 campaign pamphlet headed Miscegenation Indorsed by the Republican Party. That's an odd platform on which to run a campaign! Oh wait... this was not published by the Republicans. It was published by the Democrats. Miscegenation was not a popular concept in the 19th century, though plantation owners made wide use of the practice with their slaves. For the electorate, however, the claim was that advocating freedom for the slaves was advocating miscegenation. “The Abolition party now in power,” claimed the Democrats, favors “abolition and amalgamation, and their object is to unite in marriage the laboring white man and the black woman, and to reduce the white laboring man to the despised and degraded condition of the black slave.” $350.

Item 24 is an almanac and a little more: John Bull's Sarsaparilla Almanac for the Year of our Lord 1852... While containing much of the information needed for an almanac, particularly one for Louisville where it was published, its main purpose was to promote Mr. Bull's (if that was really his name) sarsaparilla. It was a cure-all. It cured everything from cancer and syphilis to diarrhea and “eruptions of the face.” Medicine was so much simpler, and more effective, then. $350.

Back in the 19th century, public schools did not always treat all religions equally. In 1881, Catholic residents of Philadelphia were upset about teachings at one such school, as preserved in this Petition, Proceedings and Testimony in the Matter of the Petition of Kelly et Al., in Relation to Teachings in the Hunter Girls' Grammar School. Apparently, Anna Scull, who was the principal as well as a teacher, was editorializing a bit in her teachings. She claimed Pope Leo X had sold indulgences. Pope Leo was Pope at the time of Luther's 95 Theses and he sold a lot of things. Some, Luther included, believed indulgences were among the items he sold. Leo engaged in a lot of public works and other expenditures, outpacing the Vatican budget, leading to some creative financing methods by the Pope. Nonetheless, Philadelphia Catholics had a good point in wondering what any of this had to do with spelling. The Board of Education upheld Ms. Scull's teaching methods, whereupon many Catholic parents, with Church support, withdrew their children from the public schools. Item 70. $250.