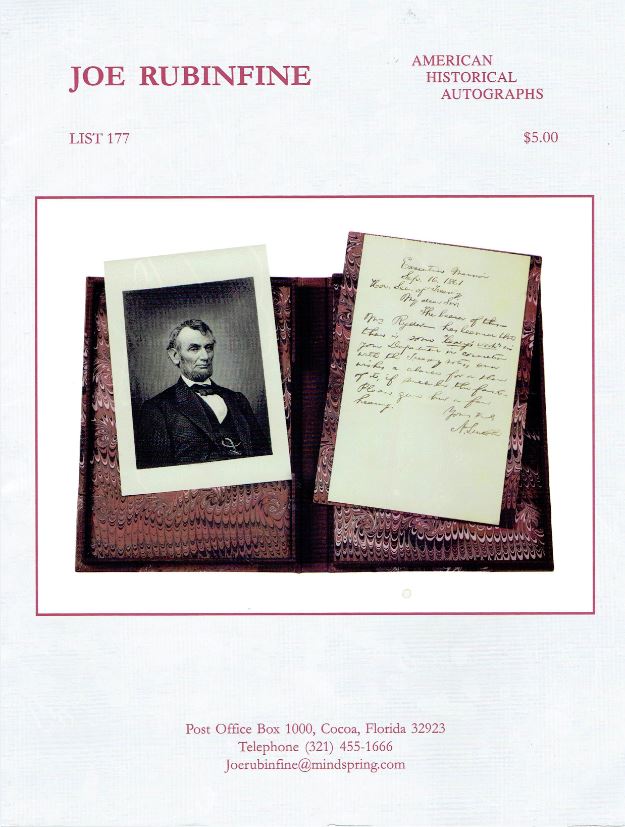 Joe Rubinfine recently published his List 177 of American Historical Autographs. This is a collection of documents many of which are signed by the most notable of American leaders. There are multiple signed items from Washington, Jefferson, Lincoln and Kennedy. Many military leaders will be found from both the Revolutionary and the Civil War. Some might not quite have thought of themselves as American, at least in that period from 1861-1865, though they would return to the fold. There is also one from a figure who was American as in the continent, not the United States – Mexican revolutionary leader Emiliano Zapata. Here are some examples of the important signed material offered in Joe Rubinfine's latest selection.

We begin with a long letter from an aged Thomas Jefferson, 82 years old and in the last year of his life. It contains some of his longstanding thoughts on government while leading up to a job request for a friend. On September 14, 1825, Jefferson wrote to Richard Rush, son of Declaration of Independence signer Benjamin Rush, who was just returning from an assignment as Minister to Great Britain to become Secretary of the Treasury. Jefferson begins by noting he has not been doing much writing lately, having been confined to his house for four months due to ill health. He describes the major political difference as being between those who favor a strong executive and those a strong legislature, which he sees as more representative of the people. In what appears to be a bit of a dig at his now ancient battles with Alexander Hamilton, he writes, “The friends of a strong executive...heretofore looked, for effecting it, to a prolongation of the term of office by making it for life or hereditary.” However, Jefferson goes on to say that his attention is now focused on the next generation, in particular, his interest in the University of Virginia. A man who worked with him on this project was Bernard Peyton, and the former President slides into a recommendation on his behalf. Claiming he had never made such a request before, Jefferson says he recommended Peyton for the job of Richmond Postmaster to President Monroe, but that Monroe had given the position to another. Therefore, he was seeking Peyton's appointment as Collector of the Port of Richmond, an appointment that would fall under Rush's authority. Jefferson notes that there is a respected incumbent currently in the position, but that he is an elderly and ill man and so a vacancy might soon occur. Peyton never did receive such an appointment, but 16 years later, he was appointed Postmaster of Richmond during the 30-day presidency of William Henry Harrison. Item 18. Priced at $60,000.

On November 17, 1959, John F. Kennedy wrote a friendly letter to Mrs. “Juno” Cox of Wellsburg, West Virginia. She was the wife of a local businessman and evidently a supporter of Kennedy's political ambitions as they had met on a visit the future President had paid to that state. “The response to our visit was most gratifying,” Kennedy writes. “Although I have no definite plans...I hope to return sometime after the first of the year...” West Virginia would prove to be a key state in Kennedy's presidential race, and the support of prominent West Virginians certainly must have been very gratifying. No Catholic had ever been elected President, but many believed that if Kennedy could win a state as deeply conservative Protestant as West Virginia, it would mean he had a shot at the presidency. Kennedy trounced opponent Hubert Humphrey in the West Virginia primary in 1960, one of the key moments in his successful ascent to winning the presidency later that year. Item 21. $1,250.

On November 25, 1783, “Evacuation Day,” the British finally exited New York. The Treaty of Paris had actually been signed a couple of months earlier, but the British needed time to handle the influx of loyalists seeking to escape America before their protectors departed. The British departed that morning, and Washington and his troops rode in that afternoon. The following day, Washington was addressed by a group of gracious patriot exiles who now could finally return home. The day after that, Washington issued a written reply. It is in the hand of his aide, Richard Varick, but signed by Washington. Washington lauds “The Fortitude and Perseverance which You and your suffering Brethren have exhibited...” He then goes on to wish, “May the Tranquility of your City be perpetual. May the Ruins soon be repaired, Commerce flourish, Science be fostered; and all the civil and social Virtues be cherished...” Some of those happened, but perpetual tranquility not so much. Item 45. $275,000.

Item 3 ties together a couple of political figures from the turn of the century not often thought of jointly: three-time presidential candidate William Jennings Bryan and longtime Mexican President/dictator Porfirio Diaz. It is a copy of Bryan's 1898 book, The First Battle. Bryan had already lost his first presidential battle, and would lose twice more as the three-time unsuccessful presidential candidate of the Democratic Party. Diaz would be more successful, winning elections he could not lose repeatedly during a 27-year rule. Bryan has inscribed this copy of his book to Diaz “With great respect” on January 21, 1898. The Mexican people would tire of Diaz' rule. He did bring stability through force, but prosperity mainly went to the privileged, leaving others behind. He was overthrown in 1911 and lived out his life in exile. However, through most of his rule, the stability part of the equation brought Diaz admiration and all kinds of plaudits from American politicians on both sides of the aisle, Bryan included. $1,000.