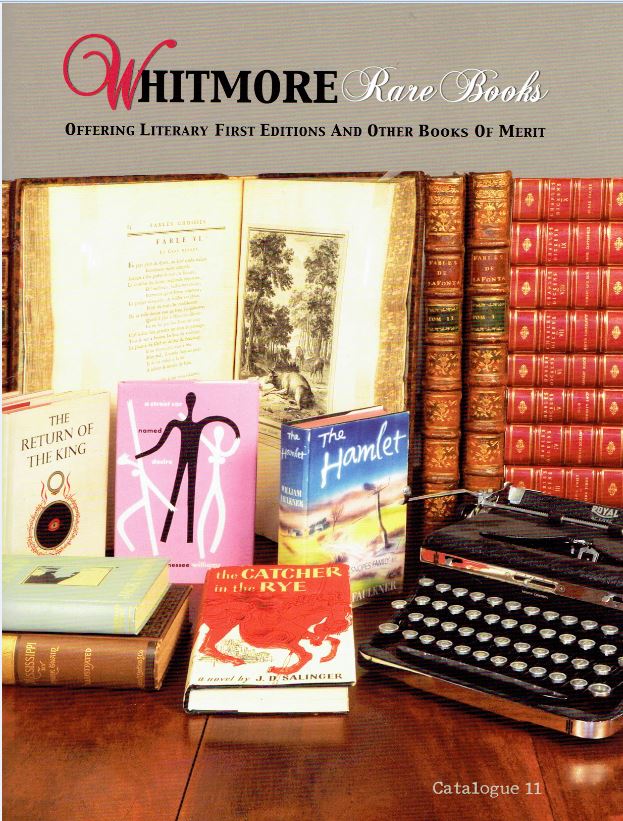 Whitmore Rare Books recently published their Catalogue 11. Whitmore describes their focus as “offering literary first editions and other books of merit.” That's a reasonable description. There is not much in the way of nonfiction here, but when it comes to literature, you will find some of the best. Here are a few examples.

We begin with an epic novel, certainly one of the greatest literary masterpieces ever written. It was written in Russian, but this edition is in English. It is the first American edition, and the first complete, unabridged edition in the English language, of Leon Tolstoy's War and Peace. The book was first published in 1869, but this complete edition of the four books in English wasn't released until 1886. The book is a look at life among several substantial Russian families during a terrible time, the Napoleonic invasion early in the 19th century. The Russians persevered, as they always do, though it is never easy. Item 62. Priced at $18,500.

Item 43 is the first novel by a writer known more for his short stories – O. Henry. Cabbages and Kings, published in 1904, is actually somewhere in between a novel and a collection of short stories. They take place in a fictional country in Central America. O. Henry invented the term commonly used today to describe such a place - “Banana Republic.” The book appears to be a collection of unrelated stories but at the end the reader can see how they all come together. O. Henry, whose real name was William Porter, wrote the book while hiding out in Honduras. He was wanted for embezzlement during his time as a bank teller in Austin, Texas. Eventually, he returned, spent a few years in prison, became a famed writer during the first decade of the twentieth century, only to succumb to the effects of acute alcoholism in 1910. $350.

Next up is a mixed edition of the greatest of all fantasy travels, Travels into Several Remote Nations of the World. The book is better known simply as Gulliver's Travels. Jonathan Swift created a fantastic world, the likes of which have been copied by later fantasy writers. Nevertheless, his adventures remain enormously popular to this day. The book was intended as a satire on the politics of early 18th century England, but that part is obscure today and mostly forgotten. As Printing and the Mind of Man noted, “For every edition designed for the reader with an eye to the historical background, twenty have appeared, abridged or adapted, for readers who care nothing for the satire and enjoy it as a first-class story.” This mixed set includes one first edition volume and one of the second edition. Item 57. $4,000.

Long before Ayn Rand became an inspiration for conservative politicians and economists, she was an obscure Russian immigrant trying to make a living on her writing. In 1934, she was commissioned to write a play. It was to be a play about a trial, something that had been done successfully a few years earlier. However, in Rand's play, a jury would be chosen from the audience to decide the case. The ending would be different depending on the jury's verdict. The plot involved the death of an industrialist, with the defendant being his secretary/lover who may or may not have murdered him. While this was not as obviously a morality play about Rand's values as her later works, to her the underlying message was still the one that would bring her greater acclaim years later. The defendant, with whom she sympathized, represented individualism, while the prosecution's witnesses were the essence of conformity. The jury's verdict would tell more about the jurors than the fictional characters. The original version had been subject to certain changes by the producer which Rand detested. The result was that many years later – 1968 – she published what she considered the definitive version of her play, Night of January 16th. She inscribed this copy the following year. Item 48. $2,000.

Here is a book that many of us have read. However, it is a book we have read to someone else, someone quite small. It is a classic – Goodnight Moon. It combines the soothing text of Margaret Wise Brown with the riveting illustrations of Clement Hurd. Whitmore notes about this beloved book, “It reads almost as a lullaby, and has soothed literally millions of children to sleep since the first publication in 1947. While that would not be high praise for many books, it is so here.” Item 2 is an early printing of the first edition with the rare dust jacket. $2,850.