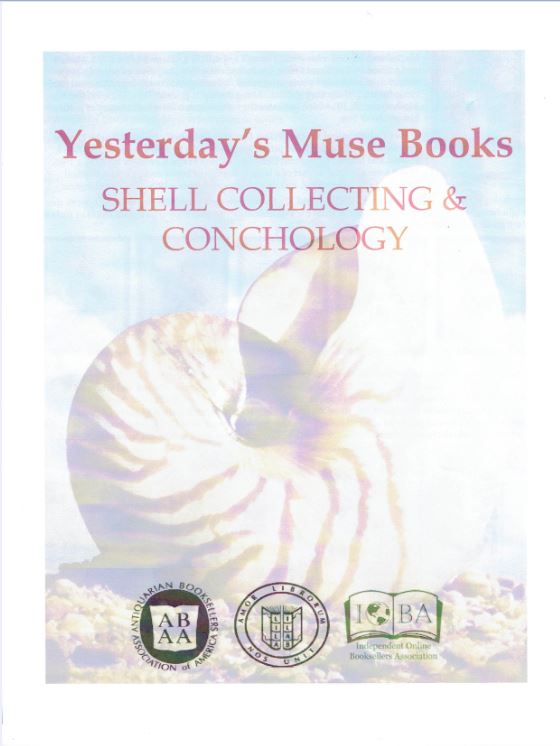 Yesterday's Muse Books has issued a catalogue for collectors, but not just book collectors. The title is Shell Collecting & Conchology. Long before there was book collecting, or stamp collecting, or most other sorts of collecting, shells were a popular item for collectors. Beautiful, abundant near the sea, and free if you aren't too picky, they are a natural. Then, as explorers headed out to distant lands, some collectors of greater means began to build displays with a wider variety of shells gathered around the world. The result was books about conchology and later about collecting became popular. Here are a few items for those whose interests are focused on these wonders of the sea.

While many in London were concerned with colonial issues in 1776, Emanuel Mendes da Costa had his own personal concerns. Mendes da Costa was a naturalist and shell and mineral collector. He apparently had a few business interests but they did not provide him much support. It was through his occasional books and generous benefactors that he was able to build his extensive shell and mineral collections, and become an expert in conchology. His work was praised by notable scholars such as Carl Linnaeus. He was selected to various organizations, including the Royal Society, at which he was appointed as clerk and librarian. Unfortunately, finances were always an issue for him, and handling the society's membership accounts proved too much of a temptation. At times he would sign up members for a five-year term, but show them as annual members, paying the annual fees himself, effectively writing himself an interest-free loan between payments. At other times, he apparently just skimmed off funds. He got caught when a member noticed he was not signed up for the correct number of years. He was thrown out of the society in 1767 and sent off to debtor's prison. The remainder of his life proved an even greater struggle. Though his work was respected, he could not land serious employment any longer. In 1776, he published this book: Elements of Conchology: or An Introduction to the Knowledge of Shells. He needed the money. It is an excellent book, with seven fold-out plates and two fold-out tables, a worthy addition to a conchology library even if circumstances resulted in its author being ignored and then forgotten. Item 32. Priced at $600.

The aforementioned Carl Linnaeus provided the system of classification for shells (and other creatures). John Mawe offered a detailed and updated description of that classification in 1823: The Linnaean System of Conchology, Describing the Orders, Genera, and Species of Shells, Arranged into Divisions and Families... Mawe was a minerologist and conchologist, and was also a dealer in collections of these from his shop on The Strand in London. One of several books Mawe wrote, this one contains 36 hand-colored plates. Item 57. $350.

From the same era comes this illustrated identification of shells by William Wood: Index Testaceologicus; or A Catalogue of Shells, British and Foreign, Arranged According to the Linnaean System; with the Latin and English Names, References to Authors, and Places Where Found. This is the revised second edition of 1828, published ten years after the first. Wood was a surgeon and zoologist whose natural history works were focused on mollusks. This book contains illustrations of 2,300 shells. Item 83. $350.

Item 24 is The Living Cowries, by C.M. Burgess, published in 1970. We all know cowries, though I would guess many if not most of us have not seen a living one. Cowries have a rounded, somewhat egg-shaped shell, except for a relatively flat bottom. They are shiny and polished looking with a surface that looks like porcelain. Many consider them the most beautiful of all shells. This is an exhaustive but non-technical description of the cowries, with illustrations and descriptions of each species. It also tells us about the habits and characteristics of the animals that live inside these shells, that many of us have never seen. $60.

Once in awhile you come across a book that you instantly recognize as one you owned as a child. Here is one for me: Seashores: A Guide to Shells, Sea Plants, Shore Birds, and Other Natural Features of American Coasts, by Herbert S. Zim, published in 1955. Zim published all kinds of useful guides such as this one for shells. Of course, when we see a book like this that disappeared from our shelves ages ago, we always wonder, what would that book be worth today if I had kept it? Here is my answer - $3. Oh well. Item 85.