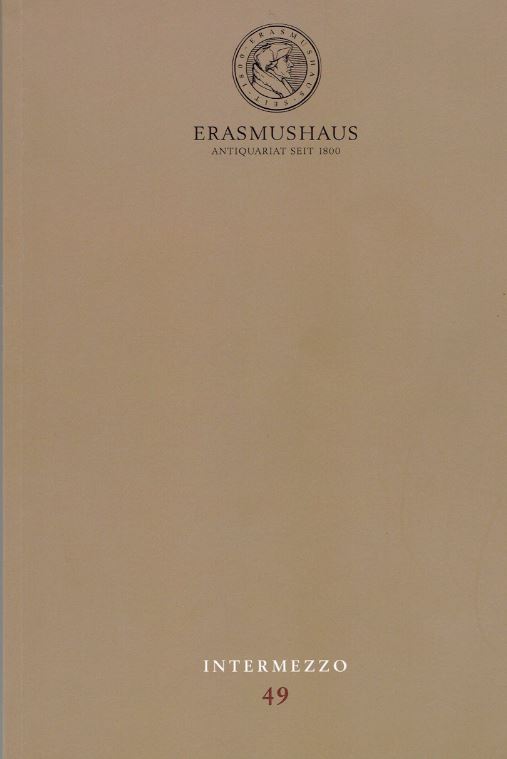 Erasmushaus has issued a new catalogue, Intermezzo 49. This is a collection of varied works all of which are quite old. The Swiss bookseller's catalogue is primarily in German, though there is a smattering of English and French in the case of books in those languages. Erasmushaus notes that descriptions in English are available on request. Otherwise, a working knowledge of German is most helpful. Here are a few selections from Intermezzo 49.

First up is the Swiss edition of Jules Dumont D'Urville's account of his second great voyage, or the first in the Astrolabe: Entdeckungs-Reise der französischen Corvette Astrolabe (A voyage of discovery of the French Corvette Astrolabe). Dumont D'Urville was a French naval officer and explorer, this voyage lasting three years from 1826-1829. This trip took him to Australia, New Zealand, and various Pacific Islands. Among those islands was Vanikoro. Dumont D'Urville's ship was named after one of French explorer Jean-Francois de La Perouse's ships. La Perouse disappeared after leaving Australia in 1788 and his whereabouts remained a mystery until some remains from his ships were discovered shortly before Dumont D'Urville's arrival. Dumont D'Urville located the site of the shipwreck and gathered some of its remains. Item 81. Priced at CHF 2,800 (Swiss Francs, or roughly $3,006 in U.S. dollars).

“Franklin is dead.” So begins the first of three eulogies published together in Paris in 1790 in honor of Benjamin Franklin. Franklin may well have been as beloved in France as he was in America, a symbol of liberty and democracy, and, naturally enough, an opponent during the American Revolution of the common enemy – England. The timing of his death was also significant in France. The year, 1790, came during the early stages of the French Revolution, when idealism ran high, and many thought it would lead to a result similar to the one in America. No wonder the former American Ambassador to France was such a beloved symbol. Sadly, the French Revolution turned bloody and ended nothing like its counterpart in America, but neither Franklin nor those who participated in his Paris eulogy, could have imagined the outcome.

The first eulogy is from Honoré Gabriel Riqueti, Count of Mirabeau (better known simply as “Mirabeau”). In 1790, he was a leader of the revolution, a moderate who favored a constitutional monarchy similar to that of England. He was a great speaker and many considered this his greatest speech. Mirabeau himself died the following year (of natural causes), hopes still high for the revolution. The second eulogy came from Louis-Alexandre de La Rochefoucauld. La Rochefoucauld was a nobleman, a duke, and yet he was a political liberal and personal friend and admirer of Franklin. In his speech, La Rochefoucauld described the uncommon Franklin as a common man. La Rochefoucauld died two years later while attempting to flee Paris, the revolution having turned far more radical than was he. The third came from Abbé Claude Fauchet, perhaps the greatest orator of them all. He was a bishop who had been a leader of the storming of the Bastille. Fauchet would become a legislator and popular orator, called on for important speeches. He lived the longest of the three after Franklin's death – three years. He advocated imprisonment for the King, not death, a sign of moderation that soon became intolerable. He was sent to the guillotine in 1793. These three items, naturally enough, are in the French language. Item 101. CHF 1,500 (US $1,610).

Wherever that boundary between bravery and insanity lies for explorers, Englishman Mungo Park must be a prime candidate for one who crossed it. Park traveled to Africa in 1795 and ventured inland to the area of the headwaters of the Niger River. It was not a pleasant journey. He was both imprisoned and became very ill. Back home, it was assumed he was lost, but Park persevered and made it back. However, a mystery remained. No one knew where the Niger exited into the sea. Not that its mouth was not visible, but its long, circuitous route prevented people from matching the Niger with the river that exited far to the east. So, Park returned in 1805, and his second journey made the first look like child's play. Fever spread throughout the camp, and by the time they reached the Niger, only 12 of the 45 Europeans were still alive. Park pressed on. They rode down the river, losing more along the way, until there were but three Europeans left. That last group, including Park, was killed by natives before ever solving the mystery. Item 203 is The Journal of a Mission to the Interior of Africa, in the Year 1805..., the first edition published in 1805. It contains letters and notes Park sent back to England while on his final journey. CHF 1,200 (US $1,288).

This next item is also a travelogue... of sorts. It was all quite obviously fictional. Item 227 is Relation d'Un Voyage du Pole Arctique, au Pole Antarctique... The author was Joseph Hall, an Anglican bishop, though he published it under the pseudonym Mercurio Brittanico. This is the French edition, published in 1721. Hall meant it only to be circulated among friends, but it became widespread. In it, travelers from Amsterdam to Greenland are sucked into a giant vortex and spit out in Antarctica. At this point, Hall was free to use his imagination, as most people believed there was an enormous southern continent, but no one had been there yet to check it out. All sorts of features and creatures are discovered there, with much of it being satire for current events in England, and some stabs at the Catholic Church. Hall would go on to write much theological material throughout his lifetime, but nothing else quite like this. CHF 2,400 (US $2,576).