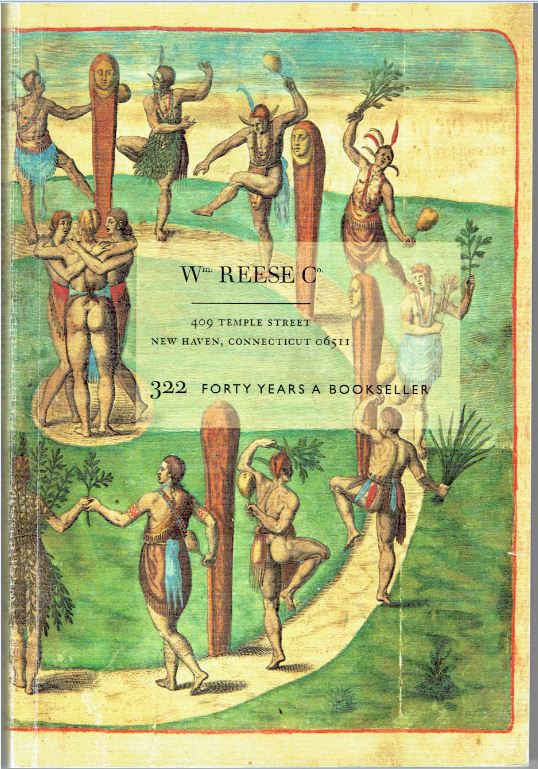 The William Reese Company has issued a catalogue celebrating Forty Years A Bookseller. Mr. Reese began his career from a dorm room as a sophomore at Yale, and hasn't left New Haven, nor the book trade, since. He founded the firm that bears his name in 1979, and issued his first catalogue in 1980. This latest one is number 322, which does not include his many bulletins and lists issued between catalogues. Along the way, Mr. Reese has become known as the premier dealer in Americana, though the firm handles other material as well. This latest catalogue includes Americana (though some is also heavily European oriented) from the 16th-20th century. This is not for faint-hearted collectors. This catalogue is filled with spectacular material, some of it unique, all very valuable.

We begin with the item whose illustration is seen on the cover of this catalogue: Wunderbarliche, Doch Warhafftige Erklarvng, Von der Gelegenheit vnd Sitten der Wilden in Virginia. This 1590 book by Theodor De Bry provides some of the earliest illustrations of Virginia. The book contains Thomas Hariot's account of a visit to the Roanoke Colony in Virginia in 1585. The illustrations are from John White, the colony's Lieutenant Governor, who had depicted Indians from Carolina, which De Bry adapted for this work. White also provided illustrations of the Scottish Picts, whom he wished to compare to American Indians. Reese notes that “no other artist so carefully rendered American Indians until Karl Bodner worked on the Missouri in the 1830s.” This first edition in German features rare contemporary hand coloring. That was very expensive at the time and is found only in copies that belonged to people at the highest levels of society. Item 2. Priced at $400,000.

Francis Drake visited America around the same time, actually slightly earlier. It was one of many stops on a voyage around the world from 1577-1580, only the second circumnavigation, following that of Magellan many years earlier. Drake was not doing a tour, nor even out to gather geographical or scientific information. Piracy was his trade, though perhaps under the cover of a “privateer” as Queen Elizabeth was happy to share in the riches he stole from the Spanish, even if she wished not to publicly acknowledge her gratitude to the Captain too clearly. It was not conducive to better relations with Spain. It was not until 1628 that this first account of Drake's voyage was finally published and even then with some adjustments for diplomacy's sake: The World Encompassed by Sir Francis Drake, Being his next voyage to that to Nombre de Dios formerly imprinted; carefully collected out of the notes of Master Francis Fletcher, Preacher... Drake was 30 years gone by the time this book was published, and even Fletcher, the ship's chaplain who provided the account, had died a decade earlier. The editing was most likely done by Drake's nephew. The connection to America is that Drake sailed up the Pacific coast, discovering the San Francisco Bay, spent some time refurbishing his ship in nearby Drake's Bay, and proceeded as far north as Vancouver. With some successful looting, Drake returned to England a wealthy man. This copy includes both the portrait of Drake and the world map, often lacking. Item 4. $225,000.

Item 10 offers working manuscripts of two of the most important pieces of legislation in American history. They weren't the work of American legislators, by no means. They came from England. These were near final drafts of the Sugar Act (1763) and the Stamp Act (1764). This legislation quickly turned America's happy colonists into angry opponents, and sent the colonies headlong toward their inevitable split with, and revolution against, their English masters. The English and their colonists had recently celebrated their victory over the French in the French and Indian War. All seemed fine, but in England, they faced a major problem. The nation had run up a large debt to fund the war, and continued to incur heavy expenses making sure its colonial empire was defended against its rivals. English authorities concluded it was time to make the Americans pay their share. First there came the Sugar Act, which placed taxes on molasses and numerous other goods. Some were already taxed, but enforcement was lax. The Sugar Act was serious. The colonists were upset and angry. Parliament then followed with the Stamp Act, that placed taxes on newspapers and other paper documents. The colonists went ballistic. They were required to pay, but had no say in Parliament. The English were forced to quickly repeal the Stamp Act, but the damage was done. Relations between the colonies and mother country would never be the same. These manuscripts are nearly final drafts of these acts, prepared for the Lord of the Treasury, George Grenville. Grenville believed these taxes were eminently reasonable and apparently had no idea how angrily they would be received by the colonies. Price on request.

Item 29 is a remarkable letter from John Quincy Adams, a former President who two years later returned to Congress as a Representative, and many believe this was the more important part of his career. The letter was written in 1837 to Elijah Howard, a lawyer from Ohio and opponent of slavery. Adams was personally opposed to slavery, but did little to address the issue as President. After returning to Congress in 1831, with abolitionism now on the rise, he began receiving many anti-slavery petitions from constituents, which he submitted to Congress. As the petitions in Congress grew, southerners sought to close the subject off from discussion. The Gag Rule was adopted, which made the subject off-limits in Congress. Adams was angered, and led the fight to repeal the rule, eventually succeeding. In this letter, he expresses his views about slavery more forcefully than ever before. Adams comments, no longer concerned about being tactful to slave interests, “...all men are born with an inalienable right to Liberty; and that this is a self-evident truth – that a nation founding its existence upon the Proclamation of that Law, should suffer its ears to hear from its own degenerate sons that one sixth part of its own people are chattels, to whom no rights can belong...” Adams goes on with further like sentiments, but expresses a belief that eventually war, slavery, and kings will be abolished, though he does not know when. Adams also speaks of the importance of technology, noting “speed is power” (referring to modern steamboats and railroads). He also makes an amazingly accurate prediction – that in another 200 years, there will be 300 million people living in America. $200,000.

Item 43 is a handwritten manuscript from Abraham Lincoln, the only one known pertaining to his offer of amnesty to Confederates. In 1863, Lincoln offered an amnesty to most Confederate soldiers, with officers, legislators, and a few others excepted. All they had to do was submit an oath to him that they would support the Constitution and the Emancipation Proclamation. They would then be free from the threat of prosecution for their past activities. Lincoln hoped to get many to abandon the Confederate cause with this amnesty, and many did. However, Lincoln later realized the amnesty as written left an opening for abuse. So he amended the offer, and in this document, he writes that amendment. Many Confederate soldiers had been captured and were serving time as prisoners of war. The offer could have allowed them to simply sign the requisite paperwork and be free, something not available to Union prisoners of war. So Lincoln amended the offer to say it did not apply to Confederates under Union custody, unless they surrendered to Union authorities expressly for the purpose of signing the amnesty. The existence of this Lincoln document was long unknown, but there is an explanation. It was for whatever reason in the collection of Mary Ford, an English collector of European literary and musical manuscripts. It was an unexpected item for her collection. Ms. Ford died in 1910, but it remained unknown with the family until sold at Sotheby's in 1999. $475,000.