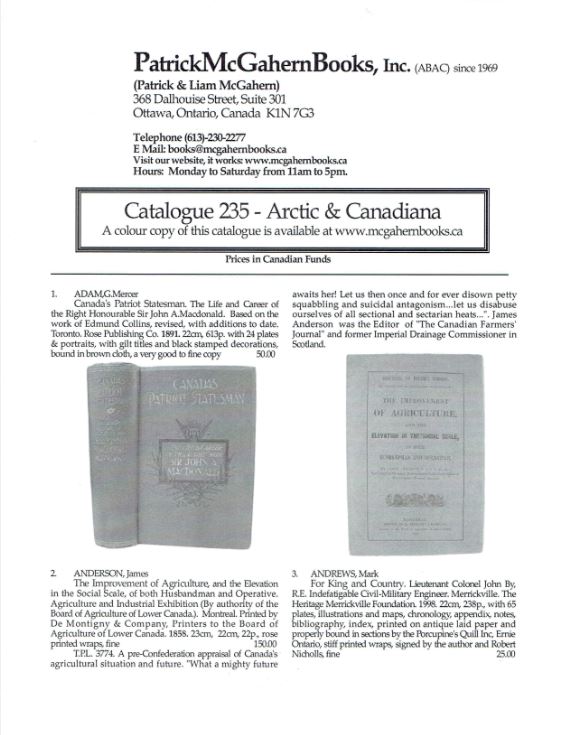 Patrick McGahern Books of Ottawa has issued a catalogue of the Arctic & Canadiana. Some of these works actually sneak below the Canadian border, but they pertain to places where winter is at least cold if not brutal. For Americans, it may seem odd to see a different take on our battles against the British before we learned to bury the hatchet once and for all in the mid-19th century, but Canada made the split more slowly. Here are a few of the items Patrick McGahern Books is offering pertaining to northern lands.

We begin with Life With The Esquimaux. A Narrative of Arctic Experience in Search of Survivors of Sir John Franklin's Expedition. This is a copy of the 1865 “popular edition.” Hall, a self-made explorer, set out in 1860 in hopes of finding survivors of the Franklin Expedition, which disappeared 15 years earlier. By 1860, based on reports from natives and artifacts found, most everyone had concluded there were no survivors of the earlier expedition, but Hall remained optimistic and persistent. He criticized the English government for giving up when, he believed, evidence pointed to there being survivors. Naturally, he did not find any survivors, there being none, and on his second expedition later that decade he finally came to that realization. Unlike Franklin, Hall communicated frequently with the natives and in so doing learned much about their lives and environment. His book focuses on natives around Baffin Island and Frobisher Bay where he searched for Franklin. Item 11. Priced at CAN $250 (Canadian dollars, or approximately $205 U.S. dollars).

Next we go south of the border to an account of a war that drove settlers from Yonkers, New York, and other areas in the mid-17th century. The pamphlet is entitled Indian Wars and the Uprising of 1655 – Yonkers Depopulated, a paper by T. Astley Atkins read to the Yonkers Historical Society in 1892. Today, Yonkers is a suburb just north of New York City, but in 1655, it was a rural area indefensible by the Dutch from what was then New Amsterdam when a large number of Indians attacked. It was known as the Peach War for an Indian girl killed by Dutch settlers for stealing a peach, though the cause was likely more complicated, emanating from rivalries between the competitive European colonial powers and various Indian tribes with different loyalties. It would take awhile for the Dutch to reestablish their position, and ultimately it would be for naught, as while they survived the attacks of the Susquehannock Indians, they would succumb to the greater power of the British a decade later. Item 25. CAN $85 (US $70).

Those who love to hear debates would have enjoyed this one from long ago: The Burgess-Underwood Debate, commencing June 29, 1876, at Aylmer, Ontario, and continuing four days, between Prof. O. A. Burgess, and B. F. Underwood. These two had little in common except the ability to talk for days. O. A. Burgess was the President of Northwestern Christian University in Indianapolis, a proponent of that old time religion. Benjamin Franklin Underwood was a free thinker from New York, what they themselves jokingly referred to as “infidels,” a believer in Darwin's theory of evolution and the preeminence of the scientific method. The local newspaper referred to Burgess as “an eloquent speaker” whose words “cannot fail to find a responsive echo in the heart of every Christian.” However, it also gave Underwood his due, noting that he made an impact on thinkers with his “facts, authorities and theories,” and that he was “not inferior to Burgess as an orator.” Item 77. CAN $100 (US $82).

Most Canadians undoubtedly know the man who first crossed the nation, Alexander Mackenzie, in 1793. Who was the first to cross the land by automobile? His name is likely unfamiliar. It was T. W. (Thomas William) Wilby. He wasn't even Canadian. He was an American automobile adventurer who decided to make the journey just a century ago. By that time America had its Lincoln Highway, a rutty, dirt road that at least provided a route from the middle of the country to the Pacific. Canada lacked such a road. It all ended at Lake Superior. From there, Wilby, who started in Halifax, had to find local roads and trails to follow. As if that weren't bad enough, the Canadian Rockies formed what many thought would be an impenetrable barrier. Nonetheless, Wilby, with the assistance of locals along the trip, was always able to find a way. Sometimes, they would lead him, other times someone would ride along in his car to show him the way. Somehow, in the span of less than two months, Wilby reached his destination of Victoria. Item 143 is his account: A Motor Tour Through Canada, published in 1914. CAN $75 (US $62).

Wilby undoubtedly could have used this guide, but it wasn't published until 1934: Socony-Vacuum Company Trouble Shooting. Motor Car Troubles...and Cures. Socony, Standard Oil of New York, was one of the many corporations created from the break up of John D. Rockefeller's Standard Oil. Vacuum Oil had been purchased by Rockefeller, but was spun back off after the break-up as well. Socony's first President is well-known to book collectors. It was Henry Folger, the great Shakespeare collector and founder of the Folger Shakespeare Library, possessor of the greatest number of First Folios. In 1931, Socony and Vacuum merged, and later adopted the more consumer friendly name Mobil. The guide promotes the quality of Socony's service, a reminder of the days when gas stations were also known as service stations, rather than convenience stores. Item 26. CAN $40 (US $33).