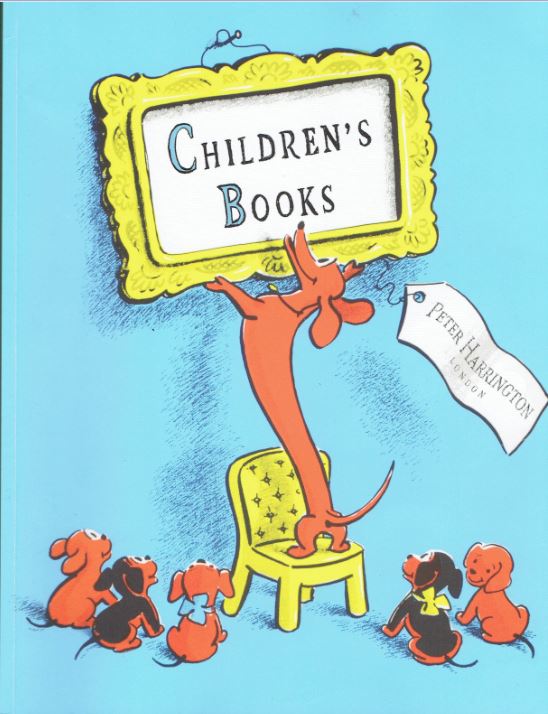 Peter Harrington has issued a new catalogue of 300 Children's Books. While Harrington usually focuses on more serious material, this selection is nothing but fun. It is filled with books from the names we all know – Seuss, Disney, Baum, Sendak, Milne and more, as well as names not as familiar, though their titles may still be. And with that, knowing that kids can't sit still for long, we will get right to a few of the books being offered.

We start with the story of a bull who will never qualify to be one of the brave bulls. Ferdinand was a lover, not a fighter. He had no desire to gore or be gored. Munro Leaf's classic is a wonderful children's tale, but with a message equally powerful for adults. I take that back – more important for adults. It was published during the build up to the Spanish Civil War, and many saw it as a pacifist morality play. Hitler ordered the book burned, but Gandhi described it as his favorite. All poor Ferdinand wanted to do was smell the flowers. Item 167 is a 1936 first edition of The Story of Ferdinand. Priced at $11,500.

Next we turn to a lovely young lady who never worried too much about weighty issues like war and peace, but she became the model for several generations of girls. Born in 1959, though she was already a teenager when she was born, Barbie came at the dawn of an era when one might think she would quickly become irrelevant. The world was about to turn upside down, a new generation deeply into civil rights, alternative lifestyles, explosive changes in music and culture, and against war. The 50's-era Barbie would seem so out of place, and yet she thrived in this alien environment, and for decades later. She stayed pure and wholesome no matter what happened in the world around her. Barbie was introduced to us as something more than just a doll through three books, released simultaneously in 1962. Item 13 is one of them: Here's Barbie, by Cynthia Lawrence and Betty Lou Maybee. It is subheaded Stories about the fabulous Barbie and her boyfriend Ken. Forty-something years later, Barbie and Ken split up, but they may be back together again – I've lost track. Harrington describes this as a “stunning copy,” signed by co-author Maybee. $735.

H. A. and Margaret Rey are remembered almost entirely for the monkey they created – Curious George. H. A. did the illustrations while his wife Margaret supplied much of the text. However, the Reys wrote several stories outside of the Curious George series. Item 229 is one of them: Pretzel and the Puppies, published in 1946. Pretzel is a dachshund, but not any dachshund. Pretzel is the longest of his already long species in the world. His extraordinary length turns off his love interest for awhile, but when he uses it to save her from a well, she comes around to seeing things his way. This copy is inscribed by the authors, who have added an original drawing of Pretzel to the front pastedown. The image you see on the cover of this catalogue is of Pretzel, though the signs have been adjusted to show the catalogue's title and bookseller's name. $2,550.

Next up is a very rare Wizard of Oz book, The Wizard of Oz Waddle Book. While based on L. Frank Baum's book, the author had little to do with it, both because it is focused on using W. W. Denslow's illustrations, and Baum had been dead for 15 years when it was published in 1934. A waddle book is one that contains cut out figures which, when assembled and placed on a base, waddle down a sloped surface. This one has cut outs for Dorothy, the Wizard, Toto, the Scarecrow, Tin Man, and Lion. The sloped surface depicts the yellow brick road. When the figures are assembled and placed at the top, they waddle down the slope. This is an extremely rare copy in that it has all of the characters still intact within the book. Item 19. $20,000.

Item 96 is a Dutch tale: Hans Brinker; or, The Silver Skates. A Story of Life in Holland. It wasn't really a Dutch story, its author, Mary Elizabeth Mapes Dodge, being an American who had never been to the Netherlands prior to the book's publication. Nonetheless, it gave many young Americans their greatest impressions of Holland. The story is about Hans Brinker, who with his sister, wants to compete in a speed skating competition to win a pair of silver skates. They are too poor to buy them. A series of amazingly lucky breaks through the story converts their miserable luck to good, the sister wins the race, Hans deliberately throws the boys' race so another can win, but the family regains its health and wealth and everyone gets to live happily ever after. In a side story, Dodge tells Americans the tale of the little Dutch boy who places his finger in the dyke and saves the town. This is a first edition, published in 1866. $4,250.

Peter Harrington may be reached at +44 00 7591 0220 or the specialist for this catalogue may be contacted at holly@peterharrington.co.uk. Their website is www.peterharringtonbooks.com.