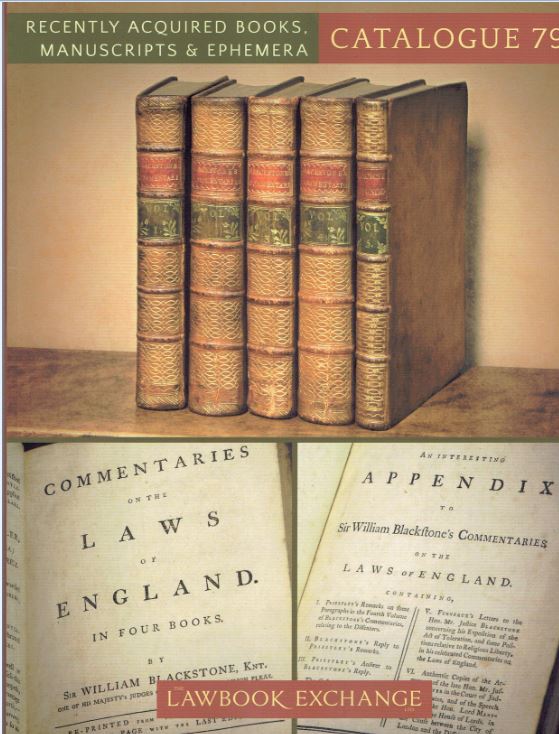 The letter of the law.

The Lawbook Exchange has issued a catalogue containing 201 items of Recently Acquired Books, Manuscripts & Ephemera. All of these works have a legal connection, but many are not legal texts of interest primarily to lawyers. Many involve the law in the context of political issues of the day, or events like sensational trials. You won't need a law license to find items to fit your interests or collection. We will skip the more legalistic texts, like the one that covers 18th century laws about olives and olive oil, to focus on a few works with perhaps a broader appeal.

We start with an odd, and disturbing, broadside headed Execution of Stephen Merrill Clark, Which Took Place on Winter Island, Salem, on Thursday, May 10, 1821. It's one that may give pause to those who see the U.S. Constitution as a fixed, rather than evolving document. In 1821, the Eighth Amendment ban against cruel and unusual punishment evidently did not apply to this case. Stephen Merrill Clark was 16 years old when he committed his crime. That crime was to burn down a barn. No one died (except, obviously, Stephen Clark). The jury recommended the legally correct sentence be commuted but the court did not listen. The young teenager was executed, death not then being deemed cruel and unusual punishment for burning down a barn. However, it did lead to pressure for reform, and three decades later, only murder remained as a capital crime in Massachusetts. Item 8. $1,850.

America had several of its greatest orators in the Senate during the first half of the 19th century, but none exceeded the vocal powers of Massachusetts' Daniel Webster. Perhaps his most famous quote comes from his 1830 debate with South Carolina's Robert Hayne, debating nullification and the threat of South Carolina seceding: “Liberty and Union, now and forever, one and inseparable.” Item 43 is a copy of the Subscriber's Edition of The Works of Daniel Webster, six volumes. It was published in 1851. Webster has signed volume 1. Just in time. Webster died the following year after he fell off a horse. Item 43. $750.

The next is a classic, Sylvia Nuptials, by Turin law professor Giovanni Nevizzano. This is a fifth edition, published in 1540, the last edition published during the author's lifetime. It covers such issues as marriage as discussed in Roman and canon law. Professor Nevizzano had some strong views about women, modestly described by The Lawbook Exchange as “misogyny.” His generalizations about women are most unfair, though probably every man knows one woman he would unkindly describe as the bookseller has described Nevizzano's views: “In his opinion, women were enthusiastic and effective torturers of men. They were successful, he reasoned, because their bodies were created by Satan and inhabited by the souls of fallen angels.” Nevizzano had some liberal views for his day on issues such as fornication, believing it not to be a mortal sin. Evidently, the good professor did find some useful purposes for Satan's creation. The Church was unhappy and demanded he remove some offending passages in later editions. Eventually, the book ended up on the Papal Index. Item 135. $2,500.

Item 165 is an abolitionist book, A Escravidao, O Clero e Abolicionismo, by Luiz Anselmo Fonseca. It calls for an abolition of slavery in Brazil, citing mainly legal, but also theological sources. The book was controversial at the time, though one wonders how abolition could have still been controversial. The year was 1887, and by then, every other nation in the Western Hemisphere had abolished slavery. Brazil did the same the following year. $950.

Next is an instructive compendium of Jewish law, as observed in England at the turn of the 18th century. Item 45 is Discourses of the Ecclesiastical and Civil Polity of the Jews, by Isaac Abendana, published in 1709. It is a second and final edition. Abendana was a rabbi from the Sephardic community, leading the Spanish-Portuguese synagogue. He also taught Hebrew at Cambridge and was a prolific writer. He was the Jewish community's premier authority of the time. $2,000.

Here is a remnant from an ecclesiastical battle at a moment when England was about to embark on a major religious conversion. The title is A Vindication of the Proceedings of His Majesties Ecclesiastical Commissioners, Against the Bishop of London, And the Fellows of Magdalen-College. In 1687, King James II interfered with the election of a president for the college. The result was the Fellows were forced at accept the Catholic King's wishes to install the pro-Catholic Bishop of Oxford as President. The King was not satisfied, demanding the Fellows admit their wrongdoing in at first trying to block the appointment and then ask for his pardon. Most refused, and were replaced by Catholic Fellows. The author of this tract, Henry Care, was a Protestant, and once vehemently so, but by this time he had mellowed and become sympathetic to Catholics, writing this defense of the King's Ecclesiastical Commissioners. James won this battle, but soon lost the war. In the following year – 1688 - James would be overthrown in the Glorious Revolution, this book would be published, and Henry Care died. Item 55. $350.