Manuscripts and Archives from the William Reese Company 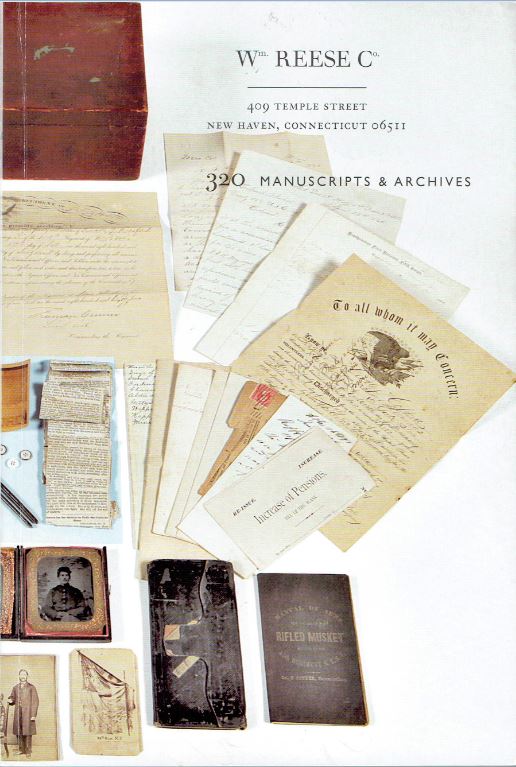 The William Reese Company recently issued their 320th catalogue, this latest selection entitled Manuscripts & Archives. They range from U.S. Presidents and other notable leaders to everyday soldiers writing home from the fields of war. In terms of timing, we find a document from a British political and naval leader instrumental in setting up the Plymouth colony, to a large collection of photographs from the Vietnam War. That said, most items come from the 18th or 19th century. The bulk are American in origin, but not exclusively so. Here are a few samples of what Reese is offering.

After a not particularly satisfying stint as Washington's Secretary of State, Thomas Jefferson “retired” to his plantation at Monticello. Jefferson had been deeply involved in his new nation's revolution, being the primary author of the Declaration of Independence, and in its formation once that independence was won. But, by the end of 1793, he was weary, and turned his focus to farming, seemingly putting the burdens and intrigue of politics behind him. On September 23, 1795, Jefferson wrote a lengthy letter to his friend, Elizabeth Trist. Always deeply involved in political affairs in the past, he writes, “I read but little, take no newspapers, that I may not have the tranquility of mind disturbed by their falsehoods & follies, and I have it in contemplation next to banish pen, ink, & paper from my farm.” That was quite a statement from a voracious reader and writer like Jefferson. Of course, we all know it couldn't last. The following year, he would run for President, be elected Vice-President instead, with that followed by two terms as President. Only then would Jefferson finally retire. Item 48. Priced at $35,000.

Not all Presidents achieve the same level of greatness as Thomas Jefferson. Here is one who did not. Item 104 is a letter from John Tyler, written to Secretary of State Daniel Webster. In it, Tyler recommends a Mississippi lawyer for the post of District Attorney. The lawyer's primary qualification was that he pushed Tyler's name for the Whig candidacy for Vice-President, to which he was elected, and from which he succeeded to the office of President. Indeed, this letter was written while Tyler was Vice-President, which makes it uncommon. Just as letters from William Henry Harrison as President are scarce as he only served one month before dying in office, Tyler's term as Vice-President was equally short before he was elevated to that higher office. $4,750.

One bad President deserves another. James Buchanan spent half of his life conniving to become President. At the age of 65, he finally succeeded, and turned out to be one of the worst we ever had. He couldn't wait to leave Washington when his term ended, the nation falling apart. His last unsuccessful attempt came in 1852. Buchanan, who would finally be nominated in 1856, would vie for the Democratic nomination with Lewis Cass, the 1848 nominee, Stephen A. Douglas, who would be nominated in 1860, New York's William Marcy and several lesser candidates. In this letter to his ally, Pittsburgh Mayor David Lynch, he speaks about his two major competitors. Of Cass, he agrees with some presumably uncomplimentary comments expressed by Lynch, but discourages comments against him on Buchanan's behalf. He notes that some of Cass' supporters like him too and he does not want to do anything to antagonize them. Of Douglas, he says he is not as objectionable as Cass, though he does not approve of all of Douglas' conduct or that of his friends. In a somewhat backhanded compliment, Buchanan writes, “With a few years of good training, he would make an excellent President.” Of Winfield Scott, who would become the Whig Party nominee, Buchanan writes derisively that he says one thing in the North and another in the South (as if any national candidate at the time did not do this). Left out of Buchanan's comments is eventual nominee Franklin Pierce. No one knew he would be a contender at the time. He received no votes at the convention until the 35th ballot, and was finally selected on the 49th as a compromise when none of the leading candidates could secure enough votes to win the nomination. Item 16. $9,000.

Utah's first printing press wasn't used to print books, or pamphlets, or newspapers. It was used to print something more valuable – money. Item 106 is what is known as a “Valley Note,” in this case, one for $2.00, printed in Salt Lake City in 1849. It has the printed heading G.S.L. City, Jan, 20, 1849. The note has been signed by Brigham Young. It was also signed by Heber C. Kimball and Thomas Bullock, and was issued to Bishop N.K. Whitney. The Municipal Council decided to issue these notes for gold dust, as that currency was hard to handle, being subject to slight loss whenever used. It is believed that currency was the first item printed on the first Utah press and was first printed in January 1849. Brigham H. Young, the then 25-year-old nephew of Brigham Young, is believed to have been the printer. Item 106. $3,500.