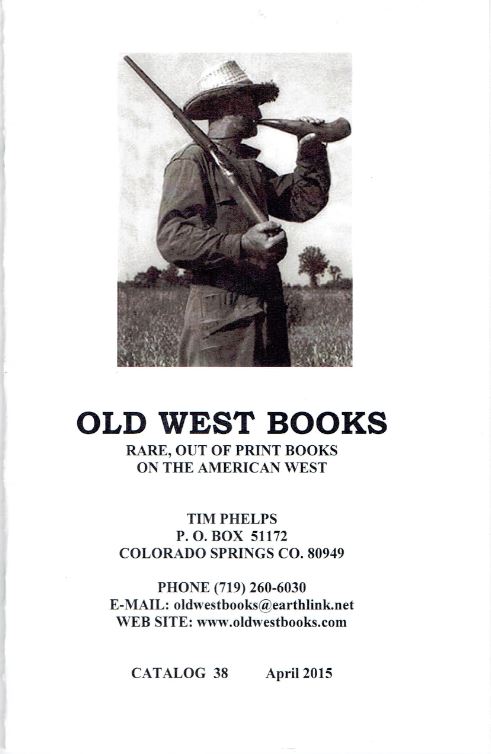 Old West Books has issued their Catalog 38 of Rare, Out of Print Books on the American West. Offered are 100 books targeted to serious collectors of the time and place we think of as the “Old West.” That means the titles are 19th and early 20th century books, though a few are of more recent vintage but pertain to those times. For Americans, this is the land of the “American Dream,” where those willing to take on the challenge could fulfill their wildest dreams. Some may have achieved these heights through the barrel of a gun, and outside of the law, and others became hardscrabble farmers, but no matter. This was our destiny, and if it wasn't, we made it so. Interestingly, if this was the embodiment of the American Dream, the Old West has long fascinated Europeans and others as well. Perhaps that reflects the reality that there were no such untamed lands left on the continent to conquer, so they were content to live the American Dream vicariously. Now, all of us get to relive those days through the books that describe those times.

The American Dream proved to be the Indians' nightmare through much of the West. Battles constantly sprung up as settlers claimed Indian land, Indians retaliated, the army retaliated to their retaliation, and so on. Ultimately, the Indians lost, even if occasionally they overcame the odds to achieve temporary success. Item 74 is A Thrilling Narrative of Indian Captivity, by Mrs. Mary Butler Renville, published in 1863. Mrs. Renville and her husband had been teachers to the Indians, but were caught up in what became known as the Dakota War of 1862. Not receiving timely treaty payments, and desperate for food, the Sioux rebelled, killing hundreds of settlers in the Minnesota River Valley. U.S. forces retaliated, capturing 1,000 Indians and carrying out the largest one-day execution in American history. Thirty-eight Sioux were hung on December 26, 1862. This book is Mrs. Renville's account of her captivity during those dark days. Priced at $12,500.

You might think that someone with a nickname like “Little Reddy” must have been a boy scout, but there was little good in Robert McKimie beyond the cute name. McKimie had already spent 15 years in a Utah prison for killing a man when he made his way to the Black Hills. There he hooked up with the Joel Collins-Sam Bass gang, holding up stages running from Deadwood to Cheyenne. On one occasion, he got careless and killed Johnny Slaughter, a popular driver and son of a Cheyenne marshal. That was too risky a move for the gang to tolerate. They threw him out. McKimie moved on to Ohio, where he went into business and became well-liked by his neighbors. However, he was eventually tracked down by a South Dakota lawman, captured, escaped, and was recaptured. His story is recounted in The Life and Adventures of Robert McKimie, Alias “Little Reddy,” from Texas The Dare-Devil Desperado of the Black Hills Region, Chief of the Murderous Gang of Treasure Coach Robbers... by J.W. Bridwell, published in 1878. The conclusion to McKimie's story remains unknown. He spent 14 years in a Ohio prison before being released. After that, some think he returned to Deadwood, but no one knows for certain where he went or what happened to him. Item 8. $1,750.

Next up we have an adventure story the likes of which could not be repeated today. Captain James Hobbs served in the Franco-Mexican War, but the title “captain” does not indicate he was primarily a military man. He was more of a mountain man, working the West before immigrants began to cross the country in numbers. He was a hunter and trapper, a close friend of the legendary Kit Carson. He coexisted among Indians, including time as a prisoner of the Comanches. He also served in the Mexican-American War as an interpreter, was a trader south of the border, and in time a forty-niner in California. His biography is revealed in Wild Life in the Far West; Personal Adventures of a Border Mountain Man, published in 1874. While it tells us much about the times, it is intended more as a story of the personal experiences of a man who lived a very wild life. Item 40. $250.

This next biography is laced with its share of self-aggrandizement, which might be inferred from its title: Life and Adventures of Polk Wells, The Notorious Outlaw Whose Acts of Fearlessness and Chivalry Kept the Frontier Trails Afire with Excitement, and whose Robberies and other Depredations in the Platte Purchase and Elsewhere, have been a Most Frequent Discussion to this Day... published by his wife's second husband in 1907. As the preface tells us, “The expressions of but a single man may change a whole epoch of history.” Did Polk Wells change history? Perhaps in his own mind. Who was he, anyway? Polk Wells was an Indian fighter on the frontier, twice captured, twice escaped. He became friendly with cowboys and criminals, the various people who roamed the plains. Kit Carson and Wild Bill Hickok were known to be friends. In 1872, he married, departed for a couple of years to seek his fortune, and when he returned, found his wife living with another man. Polk was understanding. Even gave him some money, and the man would later marry his wife and publish his autobiography. However, in 1879, Wells turned to crime. He started robbing trains and banks, and was good at it for a few years until he wasn't. He was sent to prison, attempted an escape, but the success he had escaping the Indians eluded him. Even more unfortunately, he killed a guard in the process, ensuring the rest of his life, which ended in 1893, was spent behind bars. In his autobiography, Wells paints himself as something of a Robin Hood, not an unqualified good man, but still someone who shared with the poor. Contemporaries considered the image more self-serving than accurate. He was hoping for a pardon. Item 96. $125.