Asia, Australia and the Pacific from the Antiquariaat Forum and Asher Rare Books 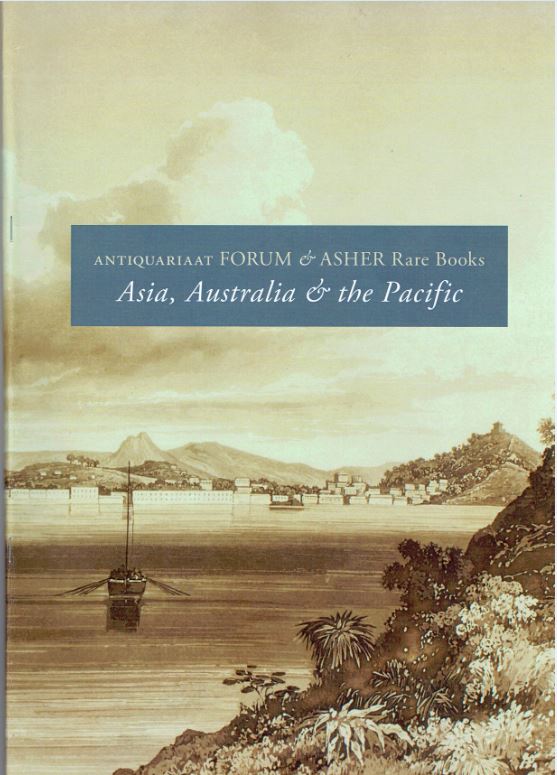 The Antiquariaat Forum and Asher Rare Books have produced a catalogue entitled Asia, Australia & the Pacific. Being Dutch booksellers, it is not surprising that a great many of the works about the far off lands involve voyages and expeditions. While the Dutch were among the earliest of explorers, these books cover travels by Europeans of all stripes, including the French, English, Portuguese, Germans, and Swedes. Australia, Japan, China, India, Indonesia, and the Philippines are among the lands visited by these explorers. A few of them made it to the Americas as well, and some completed circumnavigations of the globe. Those who collect explorations from the days when much of the world was still new to the West will appreciate these books. Here are a few samples.

We start with an uncommon but significant item for the development of Hawaii: A Narrative of Five Youths from the Sandwich Islands, now Receiving an Education in this Country. Published by Order of the Agents Appointed to Establish a School for Heathen Youth. This pamphlet was published in 1816, back when Hawaii was still called (by the British anyway) the Sandwich Islands. It was published to raise funds for the Foreign Mission School in New Haven. There was much concern at the time that Hawaiians were not learning the Christian Gospel, their being heathens, so the mission set about bringing youths to America to learn and then bring their message of salvation back home. This mission was very significant as three years later, they began sending missionaries to Hawaii to speed up the process of educating the natives, the missionaries being important to the development and westernization of the islands. Item 31. Priced at €3,750 (or roughly $4,007 in U.S. dollars).

Item 36 is an account of a circumnavigation, perhaps not well known outside of France. It is Voyage autour du Monde par les Mers de l’Inde et de la Chine... an account of the voyage of Cyrille Laplace from 1830-1832. France did not have the same level of involvement in the Pacific Rim as some of the other western powers, so Laplace was sent out to develop trade, influence, and gather scientific knowledge. His mission did bring back much knowledge, and Laplace made many contacts, though he was unsuccessful in setting up trade relations with China. This copy of the set (1833-1835) includes the four text volumes, the atlas hydrographique, and the atlas historique, with the 72 extraordinary aquatint plates. €69,500 (US $74,105).

We next have another circumnavigation, and a first: Fregatten Eugenies Resa Omkring Jorden... This is an account of the first Swedish circumnavigation, admittedly more than three centuries after Magellan's circumnavigation. The voyage from 1851-1853 was captained by Christian Virgin, but the account was written by naval officer Baron Carl Skogman. This first edition was published in 1855. They made numerous stops, including both coasts of South America, San Francisco, Hawaii, Australia, the Philippines, and Hong Kong among them. The book in full has only ever been translated to German, with the parts relating to South America translated to Spanish and only the 30 pages relating to Hawaii translated to English. Item 65. €750 (US $800).

Speaking of Swedish travelers, here is an unusual item: Vara minnen. Privately published in 1886, it is an account of the travels in 1883-1885 of three Swedish princes – Carl, Eugen, and Oscar. They were the sons of King Oscar II, all young men at the time – Carl and Oscar had just reached their 20's, Eugen still in his teens. They traveled to the Pacific and the Middle East. Two chapters cover their visit to Polynesia, including Hawaii, while others describe Egypt and the Middle East, as well as India, the Philippines, and Japan. While the three sons were in line for the Swedish throne, none of them ever became King. They were sons numbers 2, 3, and 4, and number 1 became King Gustav V in 1907, where he remained for the next 43 years. This copy has a signed inscription from 1890 by Prince Carl, to a “Syster Jenny.” Item 45. €750 (US $800).

Here is a remarkable traveler – Ida Pfeiffer. Not many women did extensive traveling in the 19th century, especially by themselves. Mrs. Pfeiffer did not begin her travels until after her husband died and children were grown. Her two around the world voyages did not begin until after her 50th birthday. Item 51 is a first edition in the original German of her account of the second voyage around the world: Meine zweite Weltreise, published in four volumes in 1856. Ida Pfeiffer was not wealthy, supporting her adventures selling her books and botanical, zoological, and mineralogical specimens she gathered. Much of this account covers her time in the Dutch East Indies, but she also came to California and South America. Unfortunately for Mrs. Pfeiffer, the following year she became ill in Madagascar and died. Item 51. €1,250 (US $1,334).