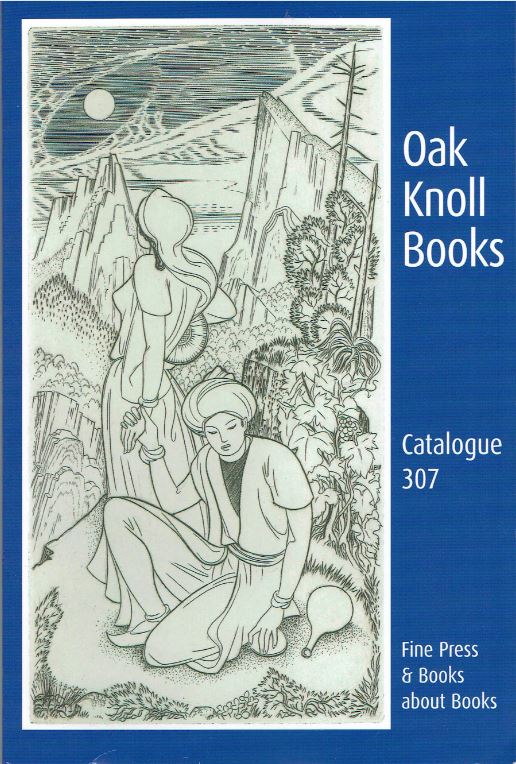 Books about books and other things.

Oak Knoll Books recently released their Catalogue 307 Fine Press and Books about Books. Their specialty is the book arts, with this catalogue broken into sections to guide readers to items of greatest interest. The section headings are: featured book, bookbinding, printing history, miniature books, private and fine press, the Limited Editions Club, book illustration, book design, type specimens, papermaking, reference and bibliography, books about books, and miscellaneous titles. Most of those headings are self-explanatory, but that one about “miscellaneous titles” is a real grab bag. These are not typical Oak Knoll items, making this an intriguing catalogue even for those who don't collect in the book arts. Variety is the spice of book catalogues. Here are a few items from this latest Oak Knoll selection.

We start with the first item in the catalogue, the “featured book.” Item 1 is the History of the Expedition Under the Command of Captains Lewis and Clark... a first edition (1814) of the official account of the most significant U.S. internal expedition ever undertaken. Meriwether Lewis and William Clark led the expedition to the American Northwest, exploring the newly acquired Louisiana Territory at the direction of President Jefferson. There are few books as important to an Americana collection as this one. This copy is not in perfect condition, and is lacking the separately issued folding map, but is available at one-tenth the price that some copies command. Priced at $12,500.

Next we have an item Oak Knoll describes as a “spectacular book.” That is a fair description. Item 218 is A Book of Samples of Papers manufactured to Print Properly All Kinds of Illustrations. Together with a Book of the Same Papers Printed and Lithographed in All of the Principal Processes Used for Illustration. It was published in 1922 by the Champion Coated Paper Company. Champion, which later changed its name to Champion International paper, existed for over a century until purchased by International Paper in 2000. This is a demonstration book with samples of 328 different papers, followed by illustrations printed on the same types of paper. $275.

Here is an unusual title from the category of book illustration: Life in London; or, the Day and Night Scenes of Jerry Hawthorn, Esq. and His Elegant Friend Corinthian Tom, Accompanied by Bob Logic, the Oxonian, in their Rambles and Sprees through the Metropolis. This is the work of Pierce Egan, a British novelist, sportswriter, and chronicler of contemporary culture, published in 1821. Wood engravings were provided by Isaac Robert and George Cruikshank, Sr. Oak Knoll describes this illustrated work as “a beautiful book.” Item 185. $625.

It's common to see classic literature, religious texts, or even fantasy turned into miniature books. This seems like a bit of oddly heavy text to be used for a miniature – 1918-1923 German Hyperinflation, by Marjorie Palmer, published in 1967. German inflation was anything but miniature in this period. Germany chose borrowing to fund its war effort during the First World War. The result was that the exchange rate went from 4 marks to the dollar to 9 by war's end. By the end of 1919, the exchange rate had ballooned to 32 marks to the dollar, and 90 in 1921. It was then that Germany had to begin paying reparations to the allies. It had to pay in either gold or foreign currency, and lacking sufficient gold, it began printing more and more paper marks to buy foreign currency. The more it printed, the more the mark's value dropped, requiring more and more newly minted marks to buy decreasing amounts of foreign currency. By the end of 1921, the exchange rate had skyrocketed to 330-1. The hyperinflation had barely begun. At the conclusion of 1922, the exchange rate reached 800-1. Then came the serious hyperinflation. People would spend their marks as soon as they got them, knowing that tomorrow, they would be worth much less. By the end of 1923, it took an astronomical 4.2 trillion marks to buy one U.S. dollar. At that point, Germany issued a new mark to replace the worthless old ones, and the hyperinflation was brought under control. Item 45. $350 (or 1.5 quadrillion old marks).

This next book comes from the field of bibliography, and it covers the granddaddy of sporting books: A Bibliography of the Complete Angler of Izaak Walton and Charles Cotton. Arnold Wood's bibliography won't provide any recent printings; it cuts off in the year it was published – 1900. However, it will cover the antiquarian editions. Annotated descriptions are provided for 140 editions, with 86 of the title pages reproduced. It was printed for Charles Scribner's Sons at the DeVinne Press. Item 232. $750.

Item 289 is a book you will think has to do with color printing based on its title: Introduction to the Study of Colour Phenomena, published in 1905. It doesn't. It was primarily concerned with beer, though the application of the technology has now gone way beyond such spirited usages. This item comes from Oak Knoll's miscellaneous category. Joseph Lovibond was a brewer, plying his family trade, when he noticed you could determine the quality of a beer by observing its color. He determined to create a device that could be used to gauge color. What he came up with was the first practical colorimeter, an item using colored glass slides. The idea came to his mind after observing stained glass windows. The slides were colored in various shades of beer, and by eyeballing them next to a brew, he could determine its quality. The company Lovibond founded to produce his invention still exists today, and while their colorimeters are not ideal for perfectly matching colors, they are close enough for field work, their being portable for use on site. $225.