Travels and Exploration from the George S. MacManus Company 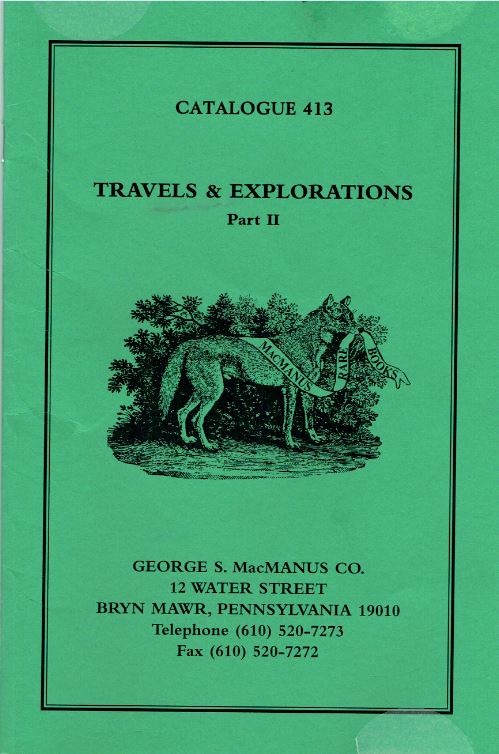 The George S. MacManus Company has released Part II of its catalogue on Travels & Exploration. This is an outstanding collection of travels both well-known and obscure. It includes journeys to all parts of the world, though the greatest concentration is in North America. The American journeys are primarily inland, mostly ranging from colonial times through the 19th century. There are western incursions from the days when places like Ohio and Tennessee were still considered the West, to the days when “West” meant what it means today. There are many excursions by visitors who came from Europe and expressed their opinions about this new land, good and bad. Then there are those hardy souls who recounted their journeys across the land to find new settlements or gold, first in California, later in Alaska. Time to set your sails, or hitch up your wagon, and take off for an adventure.

We start with an account of the most important internal exploration in U.S. history: History of the Expedition under the Command of Captains Lewis and Clark. This is the Philadelphia first edition, published in 1814, complete with the folding map that was sold separately and consequently is often missing. President Jefferson sent the captains and their crew on an overland journey to explore the newly purchased Louisiana Territory in 1804. They proceeded up the Missouri River, crossed the Rocky Mountains, and eventually made it all the way to the Pacific. They brought back a wealth of information, including details about its natural history, native peoples, and geography. They returned in 1806 to a public hungry for information about America's newest addition. Item 71. Priced at $150,000.

While Lewis and Clark returned in 1806, it was not until eight years later that their official account finally was published. That led to some cheating by enterprising publishers taking advantage of people's great desire to learn more. Next up is The Travels of Capts. Lewis & Clarke [sic] By Order of the Government of the United States... published in 1809. This is better known as the “Apocrypha edition.” It is certainly dubious when a book can't even spell one of the leaders' names right. It is essentially a fake. Published three years after the explorers returned, but five years ahead of the official report, its creators filled the void for knowledge by making it up. The authors used previously available information, both from journey participant Patrick Gass and others, and from those who had otherwise visited the West, to create this faked account. It contains five plates of supposed western Indians, one known to be taken from an 18th century book about eastern Indians, the other four likely invented. As well, this copy includes the rare folding map, surprisingly accurate, though based on an earlier map. Item 74. $13,500.

Lewis and Clark headed the first major American internal expedition, Zebulon Pike the second. Not as well remembered is the third, but here it is. It was led by Major Stephen H. Long. The mission was originally called the “Yellowstone Expedition” as Long was sent up the Missouri River toward the Yellowstone. However, after wintering over, President Monroe sent them a change of plans – to head south and look for the source of the Red River. They did not succeed, so they followed the Canadian River instead. The mission brought back much information about this previously unexplored territory, but Long made one major miscalculation. He described the area today in Kansas, Oklahoma, Nebraska, and eastern Colorado as a “Great Desert,” suitable only as a buffer between America and the Spanish colonies. He did not believe it could be settled. Long would be proven wrong within a short span of time. Item 9 is an Account of an Expedition from Pittsburgh to the Rocky Mountains, Performed in the Years 1819 and '20… Under the Command of Major Stephen H. Long, published 1822-1823. It was written by Edwin James, botanist, geologist, and surgeon for the mission. $28,500.

Item 273 is History of the Adventures and Sufferings of Moses Smith, During Five Years of His Life, from the Beginning of the Year 1806, When He was Betrayed into the Miranda Expedition, until June 1811... published in 1812. Francisco de Miranda was attempting a filibustering expedition into Spanish America, but he was nothing like later such adventurers who sought to achieve power for themselves. Miranda was a brave soldier and a patriot. He fought during the American Revolution for Spain (an American ally), for Spain in Northern Africa, and during the French Revolution. However, his heart remained with his native land (he was born in Venezuela) and in 1806, sought to overthrow Spain from the entire American continent and set up one huge new country. He was a little ahead of his time. Two of the three ships he took to Venezuela to start his revolution were promptly captured by the Spanish. Moses Smith was on one of them. In 1810, Miranda returned to Venezuela, and for a short time a revolutionary government was installed, taking advantage of Spain being taken over by Napoleon. Miranda and Simon Bolivar were among its leaders. The following year, Smith was released. Events did not go so well for Miranda, who was turned over to Spanish authorities by Bolivar when he tried to leave the country, declaring him a traitor. Miranda spent the remaining four years of his life in prison, but today is regarded as a national hero. Smith, who maintained he was tricked into joining Miranda's expedition in the first place, is remembered by this book he had published to state his case. No one gave him his Miranda warning. $750.

The lesson of this next book is if you are seeking a shortcut, don't head out into Death Valley on foot. In 1849, a group of gold seekers and their families set out for California from Salt Lake. They took the short route, straight through Death Valley. They became confused, weak, and thirsty, trying to find their way out. It seemed hopeless when William Manly and another man set out to find help for the others. Somehow, they managed to find an escape and lead rescuers back into the abyss to save the others. Manly wrote an account of this harrowing tale almost a half century later – Death Valley in '49, published in 1894. Item 99. $750.