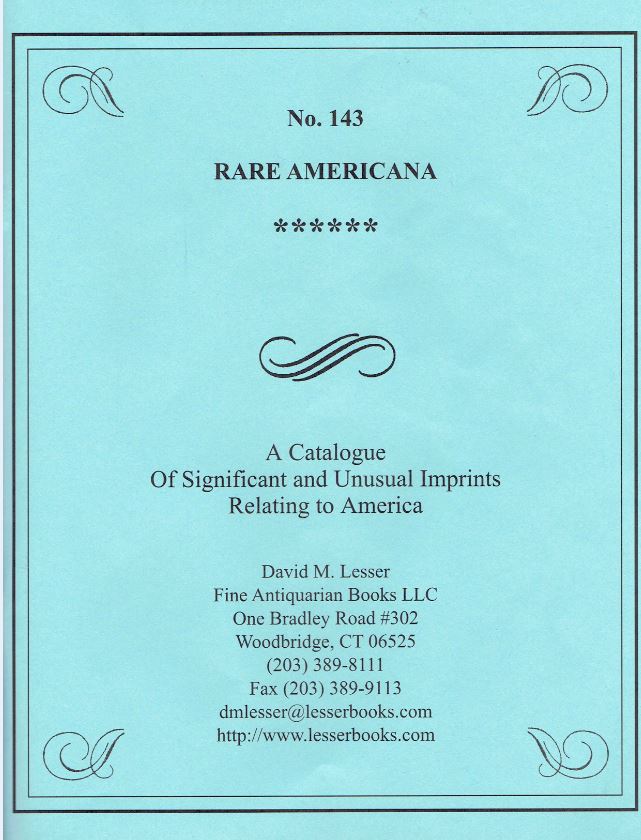 David M. Lesser Fine Antiquarian Books has issued Catalogue 143 of Rare Americana. Primarily shorter form material, it is filled with fascinating items relating to 18th and 19th century America. The topics are as varied as America itself, with the concerns of the day being discussed, debated, and explained. These are a few samples.

Here is an example of just how complicated diplomatic relations can become. It comes from 1799, when America was barely a decade old, and trying its best to keep out of foreign entanglements: Message from the President...Touching the Suspension of the Arrete of the French Republic... President John Adams warned Congress that France “subjects explicitly and exclusively American seamen to be treated as pirates, if found on board ships of the enemies of France.” France's major enemy at the time was England. Adams also relays a letter from Lord Grenville to the American Minister in London, “that the first instance of the execution of this decree, shall be followed by the most rigorous retaliation against the French prisoners whom the fortune of war has already, or may hereafter place at the King's disposal.” That sounds like gruesome retaliation by the British to protect Americans on their ships, but it doesn't answer the question of what were so many Americans doing on British ships. The answer is that they were impressed seamen, taken off American merchant ships and forced against their will into the service of England's navy. This was hardly an act of kindness on behalf of England toward her former colonies. Item 2. Priced at $275.

Next we move to a legal case, with its own complications: Important Trial for Seduction...Nancy Van Haun vs. Silas E. Burrows...28th November, 1833. According to the allegation, Mr. Burrows, son of a family friend now a wealthy merchant, seduced Mrs. Van Haun's sister. He then allegedly smeared Mrs. Van Haun and her sisters, describing them with such epithets as prostitutes, hence the suit. Mr. Burrows responded that this was all a ruse by the family to extort money from him, that his relations with the young woman were only charitable, he having resisted her advances. As his attorney said, in explaining the absurdity of the charge that he had impregnated the young lady, she was lacking “that enticing, fascinating influence, which would seem to induce a direlection of the rules of chastity or propriety. She is what Byron would call 'a dumpy woman...'” Evidently, the jury was split as to whether the lady was too dumpy for Mr. Burrows' taste as they ended up deadlocked. A retrial, however, let Mr. Burrows off the hook. Item 134. $250.

Here is the trial of another woman accused of disreputable behavior: An Account of the Trial of Susan B. Anthony on the Charge of Illegal Voting at the Presidential Election in Nov., 1872, and...the Inspectors of Election by Whom Her Vote Was Received. Susan Anthony and several other criminal women had applied to vote at a Rochester, New York, polling station. They argued that the 14th Amendment, designed to provide equal rights to former slaves, also applied to them, that as citizens of the country, they too had the right to vote. The election inspectors agreed, but the law did not as they were soon arrested. Ms. Anthony argued, “To deny them such rights [voting], is to leave them in a condition of political servitude as absolute as that of the African slaves before their emancipation.” The court was unimpressed. Emancipating the slaves was one thing, but women? She was convicted. Susan Anthony was fined for her crime but never paid the fine, the state deciding it was better not to pursue collection in this case too diligently. Item 8. $2,750.

Next up is the autobiography (all 16 pages) of a real character from Ohio: My own Memoir: or, the more Important Incidents in the Life of William Delany Patton. Dedicated to the Servant and the Serf---the Autocrat and the Patriot---the Tax-gatherer and the Tax-payer---the Oppressor and the Oppressed. Published for the Benefit of the Anglo-Saxon Race (in 1850). According to his autobiography, for which I cannot vouch, Patton was “elected” Monroe County Sheriff when the electoral victor was disqualified for not being a citizen. This resulted in his having to make several trips to the state legislature to sort it all out. Patton felt he should be reimbursed for his expenses. Among his claims was “I claim that being absent from home, the wear and tear on my heart must be necessarily considered… The long nights that I have solitarily spent upon a bachelor’s pillow---the ever recurring memory of her who is absent---the gorgeous visions that haunt the slumber of the exile from home---all these must at last appeal to your sense of justice. Would it be asking too much in demanding... $160.” Seems reasonable. I also cannot vouch for everything I read on the internet, but he may indeed have very much missed his wife, as she died three years later, and he then became weirder still. He married four more women, the last three at the same time, and had 18 children, for whom he provided little if any support. Item 113. $750.