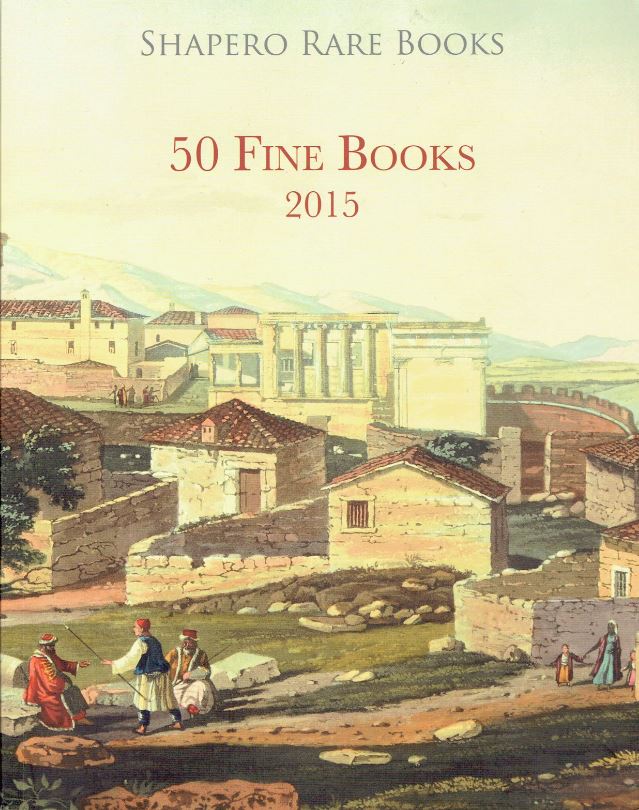 Shapero Rare Books has issued a catalogue of 50 Fine Books. That title is their only description of the catalogue itself. They go directly to descriptions of the books themselves. We will follow that path, and go straight to describing these fine books, though only a small sample of them will fit in this review.

We begin with a spectacular color plate book of some of the world's most beautiful flowers, orchids from Central America. The book is The Orchidaceae of Mexico and Guatemala, by James Bateman, an elephant folio published 1837-1843. It is always helpful to be able to quote an outside source, and Shapero quotes W. Blunt's description of this book in The Art of Botanical Illustration: “probably the finest, and certainly the largest, botanical book ever produced with lithographic plates... In size and in splendour, Bateman's giant folio eclipses the works of all who went before or came after him.” Bateman was a collector of, and pioneer in the cultivation of, orchids. The Central American ones described herein he convinced a Guatemalan merchant to send to him in England. Thirty-seven of the 40 watercolors were created by either Sarah Anne Drake, a botanical artist and orchidologist, or Augusta Innes Withers, who later became a flower and fruit painter for Queen Victoria. The illustrations were expertly hand colored. Item 4. Priced at £95,000 (British pounds, or about $141,225 in U.S. dollars).

Next we go from botanical to zoological specimens. Item 33 is La Ménagerie du Museum National d'Histoire Naturelle, by Bernard Conte de Lacépede and Georges Cuvier, published in 1801. It includes the illustrations of Nicolas Maréchal, the museum's painter. The Ménagerie was associated with the National Museum of Natural History in Paris. This was something of a difficult time as control of the Ménagerie had been transferred during the chaos of the Revolution a few years earlier, but fortunately, at least the animals of Paris did not have their heads chopped off. Lacépede and Cuvier were notable French natural historians of the time. Among the exotic animals displayed is the first pictorial illustration of an American Black Bear. This copy contains 41 of a possible 42 plates, which is 2 or 3 more than is commonly found in copies of this book. £8,500 (US $12,713).

Item 9 is a groundbreaking work in the field of Arctic photography. The book is The Arctic regions, illustrated with photographs taken on an art expedition to Greenland. The trip took place in 1869; the book was published in 1873. This is very early photography for such extreme climatic conditions. The author was William Bradford, and while Bradford was an artist, oddly, most if not all of the photographs were taken by two others, photographers John L. Dunmore and George Critcherson. Bradford took several trips to the Arctic, including this one in 1869. He was sponsored by LeGrand Lockwood, a financier who had obtained great wealth in the railroad business. A painter of the Hudson River Valley School, Bradford went north to sketch scenes in the frozen land. He would use these sketches when he returned home to create paintings. He also took the two photographers along so he would have photographs from which to paint. However, when he decided to publish a book about the trip, he used the photographs to provide the illustrations. Shapero notes that this book is “a notorious Arctic rarity.” £150,000 (US $224,100).

This next work is a tribute to a different artist, one who lived over three centuries before Bradford. Born in Germany, Hans Holbein became a portrait artist. In 1526, nearing the age of 30, he traveled to England seeking better opportunities. He gained entrance to the court of King Henry VIII, where his portraits were so well-liked that he rose to be painter to the King, painting one of the most familiar portraits of Henry. Several of those who promoted his cause would later run seriously afoul of Henry, including Anne Boleyn, Thomas More, and Thomas Cromwell, all executed by the King. Nonetheless, Holbein escaped Henry's wrath, and while his role may have declined after Cromwell was executed in 1540, he remained an official painter through his death in 1543, even as he worked on outside projects. In 1792, John Chamberlaine, keeper of the King's drawings, decided to create a work of Holbein's portraits. It was released in 14 parts from 1792-1800. Entitled Imitations of original drawings...in the collection of his Majesty, for the portraits of illustrious persons of the court of Henry VIII, it contains 84 of Holbein's portraits, and this copy includes 8 additional plates called Court of Francis II. Noted for realistic, detailed portraits, Holbein's paintings are the closest things we have to photographs of these great personalities from the first half of the 16th century. Item 27. £15,000 (US $22,420).

Item 48 is An historical account of the colony of New South Wales and its dependent settlements, in illustration of twelve views, engraved by W. Preston, a convict; from drawings taken on the spot, By Captain Wallis... That title pretty well sums up this item. Captain James Wallis arrived in 1814 and was placed in charge of a convict settlement, which he changed to a regular town. He created these drawings which form the first book of landscape views of New South Wales. It is also the first plate book with engravings created in Australia by an Australian engraver. Of course, Mr Preston had no choice but to stay in Australia, he being a convict. Wallis returned to England to have the notable printer of quality works, Rudolph Ackermann, publish this book in 1821. Wallis pardoned engraver William Preston. £24,500 (US $36,635).