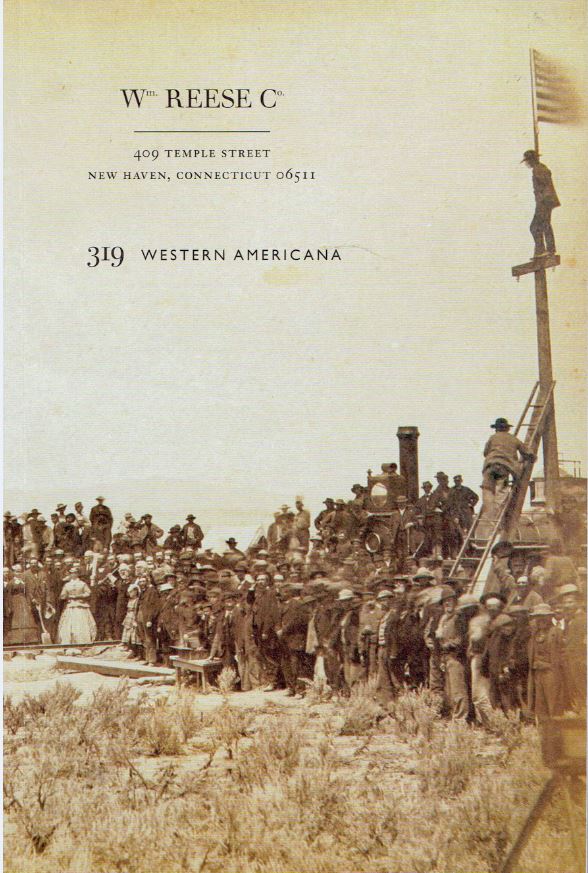 The William Reese Company has issued their 319th catalogue, this time featuring Western Americana. This is an annual presentation offering items they have acquired in the field during the past year. Items range from early Spanish and French visits and colonization in the Southwest and historical Louisiana, to the later conquering of the land by American settlers. In between, there are explorations, Indian battles, overland travels, railroad building, and more. Here are some samples of these works relating to the American West.

We start with an item pertaining to the usefulness of much the West, Our Barren Lands. The Interior of the United States West of the 100th Meridian, and East of the Sierra Nevadas, published in 1875. The author was W. B. Hazen, a Union general during the Civil War who served on the western frontier in the years following. The 100th meridian is a north-south line running through the Dakotas, Nebraska, Kansas, Oklahoma and Texas. It is essentially the western point beyond which moisture from the Gulf of Mexico no longer reaches, making it very dry. As you can guess from the title, Hazen did not believe it would be of much use for agriculture, which was the primary reason for settling the western lands. Hazen would get into a heated debate with General George Custer over the usefulness of this land, with this work being a rebuttal of the latter's claims. Custer claimed the lands were sufficiently fertile; Hazen responded that Custer was motivated by personal interests in his claims. Eventually, Custer would be vindicated, at least to the point that some of the land was irrigated and much used for raising cattle, but as that 1875 publication date reveals, he didn't live to see that vindication. Item 66. Priced at $2,500.

The image on the cover of this catalogue is a photograph of a momentous event in the opening of the West. It is a picture of the ceremony of the laying of the Golden Spike, the completion of the Pacific Railroad that allowed Americans for the first time to quickly travel from coast to coast. Construction was authorized by President Lincoln in 1862, with the laying of tracks beginning in earnest with the conclusion of the Civil War. From the east, the Union Pacific laid tracks; from the west, the Central Pacific did the same. They met at Promontory Point in Utah. Andrew J. Russell had taken several excursions along the Union Pacific portion to photograph progress on their behalf. He was present on the momentous day when the two sections were matched together with the hammering of the Golden Spike. Item 125. $38,000.

Next we have the biography of a man who helped to tame the West. Samuel Colt helped tame the West from his home in Hartford, Connecticut. Colt was the inventor of the revolver, a gun whose chamber spun with each shot, lining up the next bullet for a quick follow-up shot. He mass produced them, first for the Texas Rangers, and later for Union forces in the Civil War. They would next be used widely in the West, though Colt himself did not survive the Civil War. Item 45 is Armsmear: The Home, the Arm, and the Armory of Samuel Colt. A Memorial, published in 1866. It is a tribute to Colt prepared by his wife after he died. The book describes Colt's career, his business, and his estate in Hartford. Colt's firearms made him a very wealthy man. If you are looking for a book pertaining to important firearms few possess, this is a perfect choice. Only 15 copies of this first edition were specially bound for Mrs. Colt, as was this copy. $3,750.

A whole lot of work went into creating this legal work that ended up having a very short useful life. Item 139 is a complete set (13 volumes) of the Laws of the Republic of Texas. They cover laws passed from the beginning of independence in 1836 through 1845, the year Texas became a state. The set includes the index for 1836-1840. The volumes cover laws creating towns and counties, governing the Texas Rangers, Army, and Navy, treaties with foreign nations, and other matters. Reese notes that it is virtually impossible to assemble a complete collection from separate sources today. Perhaps if Texas ever secedes, as its Governor suggested a couple of years ago, these laws will come back in force. $25,000.

Item 116 is an account of a major expedition into the American West, perhaps second in importance only to that of Lewis and Clark. It comes with a notable provenance. The book is Exploratory Travels through the Western Territories of North America... by Zebulon Pike, published in 1811. While Lewis and Clark explored the northern part of the newly acquired Louisiana Territory, Pike visited its southern portion, and cheated a bit entering Spanish Mexico to its south. This copy belonged to French Foreign Minister Tallyrand, the clever if cynical diplomat who survived through the regimes of Louis XVI, the French Revolution, Napoleon, the Restoration, and Louis-Philippe. While he would later break with Napoleon, in 1803 he represented the French government during negotiations for the Louisiana Purchase, which sold the land Pike explored to America. $10,000.