Voyages and the Golden West from Pacific Coast Books 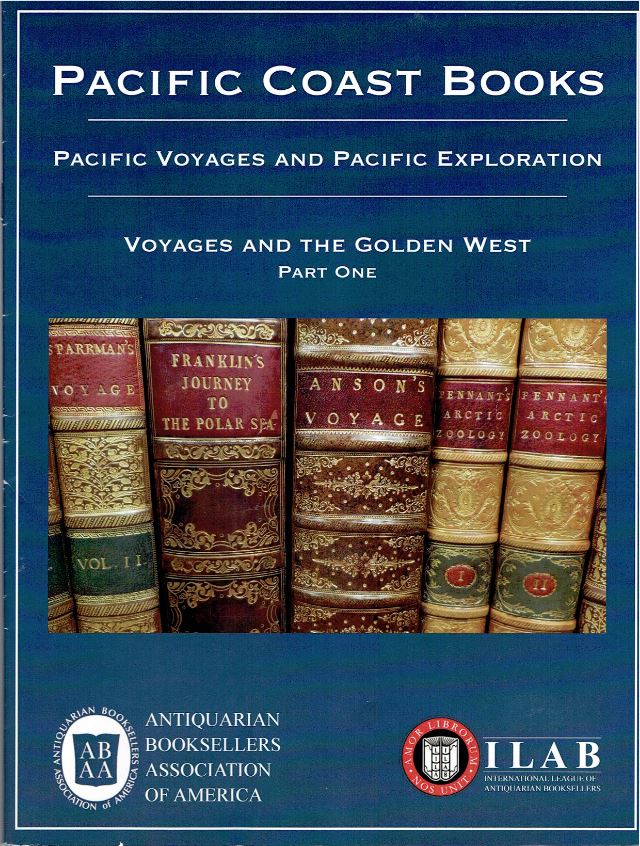 Voyages and the Golden West.

Pacific Coast Books of Lincoln City, Oregon, has issued a catalogue of Voyages and the Golden West. Part One. Lincoln City is situated along the Oregon coast, and undoubtedly some of the voyages herein described could have been seen from Lincoln City, had the community existed a couple of centuries ago. Pacific Coast Books specializes in material pertaining to the west coast of North America, much of it relating to early explorations, mainly by sea, occasionally by land. Other books simply provided information about what it was like within these then almost unknown places. Add to that a few titles about areas somewhat farther inland, and a tale or two from the land, and we have the 33 items that are offered in this selection. Here are a a few samples.

George Anson made an early stop in North America. He stopped at Acapulco, but this was long before the place was a luxurious resort. Anson eventually made it all the way around the world, a harrowing voyage that killed most of his crew, but made Anson a very rich man. Anson set off for South America in 1740 with 8 ships. The mission was to harass Spanish shipping, the two nations seemingly involved in perennial warfare. Anson's real aim was to secure a load of Spanish treasure, he being a privateer, or licensed pirate. Anson reached Mexico in 1742, only two of the original 8 ships left, and with very little in treasure to show for the loss of ships and loss of most of his men. They regrouped along the Mexican coast before heading west, eventually capturing one enormously treasure-laden ship that made the journey a great financial success for Anson. Offered is a first edition of Anson's account, Voyage Round the World in the Years MDCCXL, I, II, III, IV... published in 1748. It is accompanied by a discharge document from 1747 signed by Anson and three other commanders. Priced at $7,500.

Captain James Cook led three of the most important exploring expeditions in the history of voyages, though only one reached North America. That was his third and final voyage. Here is the official account, prepared by Cook and Captain James King (King had to complete it as Cook died on the voyage): A Voyage to the Pacific Ocean. Undertaken, by the Command of His Majesty, for Making Discoveries in the Northern Hemisphere. Cook reached the west coast of North America in what is now northern California. He charted the coast, proceeding all the way up the coast of Alaska and through the Bering Strait. He, like so many others, hoped to find the elusive northwest passage. Cook never made it back home. He was killed in a dispute with the natives in Hawaii. This 1785 first edition includes the three volumes, but the plates and charts usually found in the separate atlas are bound into the text volumes in the appropriate places. Also bound in to volume three is the rare “Death of Cook” plate which was issued later to subscribers separately and so is often missing. The folding map is housed in a separate cloth clamshell. $14,500.

Captains George Dixon and Nathaniel Portlock sailed with Cook on his third voyage, and headed up their own voyage to the Pacific coast a few years later. They sailed together on a mission to chart the coast, but also split off for much of the time. Portlock went farther north, sailing along the Alaskan coast and visiting with the Russians then living in Alaska. Dixon headed south, around Nootka Sound, to conduct his explorations. Dixon and Portlock each compiled separate accounts of the expedition. Both were published in 1789, and to make it really confusing, each used the exact same title for their book: A Voyage Round The World, But More Particularly To The Northwest Coast Of America: Performed in 1785...1788... Dixon's book is priced at $8,000, Portlock's $7,500.

Into the valley of death rode William Manly and a group of other gold seekers and their families in 1849. They were heading to California, and sought a shortcut that took them straight into Death Valley. They could not find their way out. As they unsuccessfully sought their exit under mounting thirst and weakness, Manly and another set out on foot, hoping to find rescue for the party. They finally did, and with incredible bravery, led a rescue party back into the valley, though they had little hope of finding survivors. Amazingly, they did. Many years later (1894), Manly published this account of their terrible overland journey: Death Valley in '49. It was Manly's party that gave the foreboding place the name “Death Valley.” $1,000.

Next we have a first edition, second issue of Mark Twain's first book, The Celebrated Jumping Frog of Calaveras County, and Other Sketches, published in 1867. Twain originally wrote the title story for inclusion in a collection being published by his friend Artemis Ward. However, it took Twain so long to complete the short story that it was too late for Ward's book. Instead, Ward sent it to a weekly literary newspaper, where it was a great success, Twain's first step to fame. When Twain was encouraged to publish a collection of his short stories, it was decided to make the Celebrated Jumping Frog its title. The book certainly jump started Twain's career. $7,500.