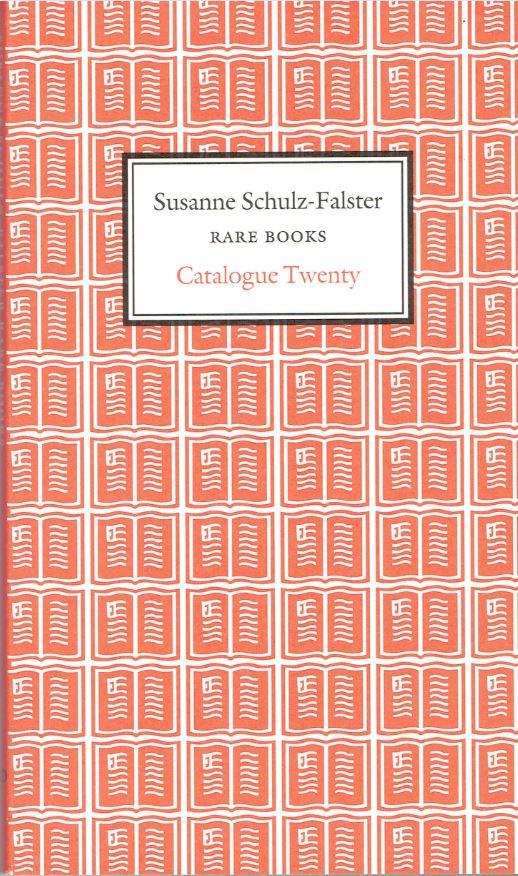 Susan Schulz-Falster Rare Books has published Catalogue Twenty. It offers one-hundred twenty items that are uncommon and antiquarian, sourced from England and continental Europe. The topics are varied but the material is always interesting. Here are a few examples.

We will start with something very large, or at least the subject matter was big: Description of a forty-feet reflecting telescope, by William Herschel. This is an original 1795 offprint of Herschel's account of his great 40-foot telescope, the largest in the world when completed in 1789, and for 50 years thereafter. Its completion was celebrated with a concert at its base, which may have been written by Herschel as he was first a musical composer before becoming an astronomer. Herschel is noted for many discoveries, in particular the discovery of Uranus, the first new planet in a few millennia. The new telescope, five-foot in diameter, quickly discovered a new moon revolving around Saturn. While spectacular in size, the 40-foot telescope was not easy to use, and probably was not quite the advance over smaller ones Herschel may have hoped. The offprint includes 19 explanatory plates and a dedication to King George III, who put up £4,800 to finance its construction. Item 62. Priced at £9,800 (British pounds or approximately $15,076 U.S. dollars).

We have seen self-service replace personal service in many fields in the past generation or two – grocery stores, restaurants, pumping gas. Here is a much earlier such advance, and one that evidently needed instruction. Item 92 is La Pogonotomie, ou L'art d'appendre a se raser soi meme... by Jean-Jacques Perret, published in 1769. This is an instruction book for men on how to shave yourself. Perret was a barber, and in his time, men went to a barber for a shave. The barber would pull out his straight razor, and presuming he was skillful, and you certainly hoped he was, he would remove your beard or stubble with nary a scratch (that was before stubble was fashionable). However, repeating this procedure yourself, in reverse in front of a mirror, was not so easy, and a mistake could lead to a bloodletting. Perret not only provided instruction, but developed a precursor to the safety razor. It placed the straight razor within a wooden sleeve so that only the very tip of the edge protruded. You might nick yourself, but the razor did not stick out far enough to inflict a deep cut. £800 (US $1,230).

You might expect a British danger poster from 1918 to be a warning about Germany, but this enemy was more insidious and much smaller. It is a folio poster from the British Natural History Museum warning, in large bold letters, about The Louse Danger. There is no better way of scaring people about tiny critters, be they lice or dust mites, then to show massively enlarged pictures of them. At the size of a cockroach, they are really gross. The illustrator of this larger-than-life louse was Grace Edwards. Her body of work includes a few other posters, such as “The Mosquito Danger,” and “Illustrations of bloodsucking flies.” This louse poster will get you started on a collection of Ms. Edwards' oeuvre. Item 44. £200 (US $307).

If you've ever struggled through Newton's Principia, trying to understand exactly what he means, here is a helpful alternative: The Newtonian System of philosophy, explained by familiar objects, in an entertaining manner, for the use of young persons. By Tom Telescope. This is a later edition (1827) which actually includes post-Newtonian discoveries, but Newton's name was synonymous with natural science at the time. The work has been attributed to its first printer, John Newbery, rather than Tom T., who is a little boy who describes the scientific principles in the book in terms children can understand. It includes numerous illustrations to make the principles easier to follow. I would certainly appreciate it if Tom Telescope would someday get around to explaining Einstein's theory of relativity in terms children of all ages can understand. Item 72. £350 (US $538).

One might expect a book about crime and punishment from 1766 to be a rather gruesome affair. Society had moved forward by then from the days of the Middle Ages, but there was still no shortage of brutality, as the French would find a few decades later during their Reign of Terror. However, Italian criminologist Cesare Beccaria had far more humane ideas when it came to dealing with crime and criminals. He believed that penalties should be based on the degree the crime injured society. Prevention should be the primary aim of penalties, not punishment. To this goal, he believed the certainty of punishment had a greater impact than its severity. He advocated fines as punishment for property crimes, banishment for political crimes, and opposed the death penalty, arguing for life imprisonment instead. He also believed the conditions in prisons needed to be improved. Printing and the Mind of Man has described Beccaria's book as “the most influential book in the whole history of criminology.” Item 15 is the French translation from the original Italian, Traité des Délits et de Peines, one of seven editions published in 1766. £800 (US $1,230).