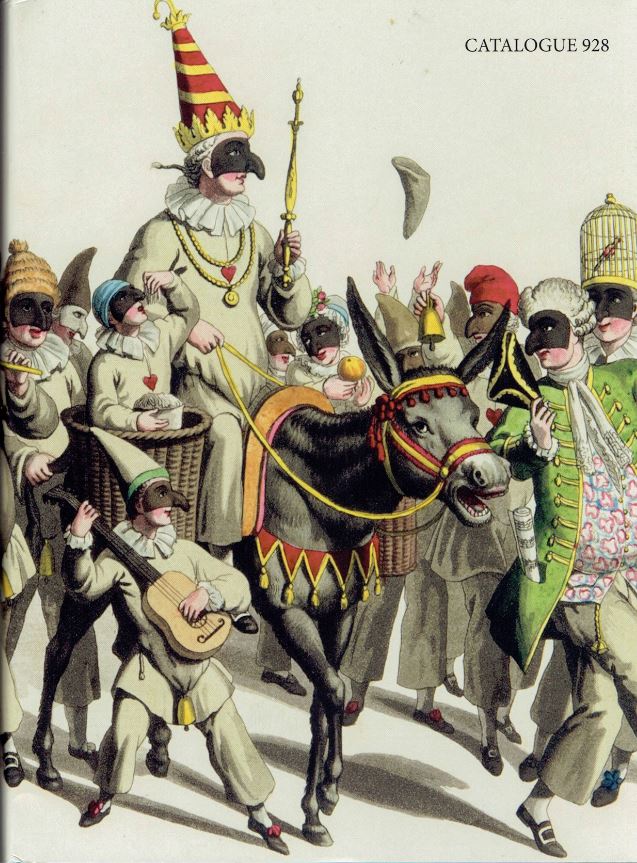 This month we received our first catalogue from Erasmushaus of Basel, Switzerland. It is Catalogue 928. We missed a few. Erasmushaus has been in the book trade since 1800. Their home is even older, it having once been the house of Erasmus (hence the name). Erasmus was a theologian of the early 16th century, a great humanitarian and reformer who nonetheless remained loyal to the Catholic Church during the early days of the Reformation. Erasmushaus specializes in the very best of books and some of the earliest too. There are several items of incunabula to be found in this catalogue, and many more almost as old. The catalogue presentation is one matching the quality of the works, a hard cover book filled with illustrations, many covering two pages, and detailed descriptions. Since it's anyone's guess what language a Swiss catalogue will employ, we will tell you – English. Here are a few of the spectacular works to be found at Erasmushaus (in addition to one from Erasmus himself).

We begin with what may be the first printing of any Greek or classical text, with the possible exception of an edition of the pseuodo-epic Batrachomyomachia. It is Vita et Fabulae, the life and fables of Aesop, the Bonus Accursius edition circa 1478. The text is in Greek and Latin. Aesop has long been used for teaching, and Accurius points out that it is intended for children and beginners learning the Greek language. Printing and the Mind of Man noted that it is from Aesop that “all popular fables of modern Europe are derived.” Price on request.

Next we have an item of enormous importance for collectors of Americana: Cosmographiae Introductio cum Quibus dam Geometriae ac Astronomiae Principiis ad earn rem Necessariis. In super quatuor Americi Vespucii navigationes. This translates roughly to “Introduction to Cosmography, together with some necessary principles of Geometry and Astronomy. Also four voyages of Amerigo Vespucci.” This was published in 1507 by the noted mapmaker Martin Waldseemuller. This edition is dated August 29, likely a fourth edition published four months later and in the same year as the first. The book begins with an introduction to geography. Waldseemuller repeatedly refers to a map and globe he prepared, indicating it was intended as a guide to be used with these. The map survives in only one copy (purchased by the Library of Congress for $10 million) and the globe in none, though three sets of uncut gores survive. The second part describes the four voyages of Vespucci and it is here that this book becomes so significant. Waldseemuller suggests it is appropriate to name the new land after Amerigo Vespucci, something like “America.” The name stuck. A later map of Waldseemuller not using that name may indicate he changed his mind, perhaps from learning that it was Columbus, not Vespucci, who discovered the new land, but by then it was too late. Price on request.

Streeter described the next item as “the most important of all Ptolemy editions, its supplement of 'new' maps the beginning of modern map-making.” It is the Geographiae opus novissima published in Srasbourg March 12, 1513. It is an atlas containing both Ptolemaic maps and new maps based on the recent voyages that began spreading out of Europe at the end of the 15th century. While the atlas does not name the map-maker, it is virtually universally attributed to the previously mentioned Martin Waldseemuller. Most notable about the work is that it is the first atlas, and only the second book, with a map of America. It contains the “Admiral's map,” a vague attribution that most believe referred to Columbus, rather than Vespucci. America is shown again as “Terra Incognita,” rather than America, possibly representing Waldseemuller's learning that it was Columbus, rather than Vespucci, who discovered this new land. Price on request.

Leonhart Fuchs was a Professor of Medicine at Tubingen University when he created this masterwork in 1542: De historia stirpium commentarii insignes. It is a large herbal, an attempt to add to the “Materia Medica,” or knowledge of substances that had curative powers over disease. Fuchs' work covered 500 plants, including some from the still new lands in America. He had specimens brought to his gardens to examine. This herbal is noteworthy for the quality and completeness of its illustrations. It wasn't the first herbal to contain illustrations, but the woodcuts Fuchs used established a new standard in botanical illustration. Giving credit where it is due, the book includes portraits of the two illustrators and the engraver. CHF (Swiss Frank) 95,000 (approximately US $99,881 U.S. dollars)

David Roberts produced two of the most spectacular illustrated works of the 19th century. Roberts was an accomplished British artist who developed a wanderlust. He had already toured Europe when in 1839 he set off on a greater adventure, visiting numerous places in the Near East. His journey took him through Egypt and various parts of the Holy Land. The drawings made on his trip became the basis of two books, one on the Holy Land, and this one: Egypt & Nubia, from drawings made on the spot. It was published in three volumes from 1846-1849. It contains 121 lithograph plates. CHF 250,000 (US $262,385).