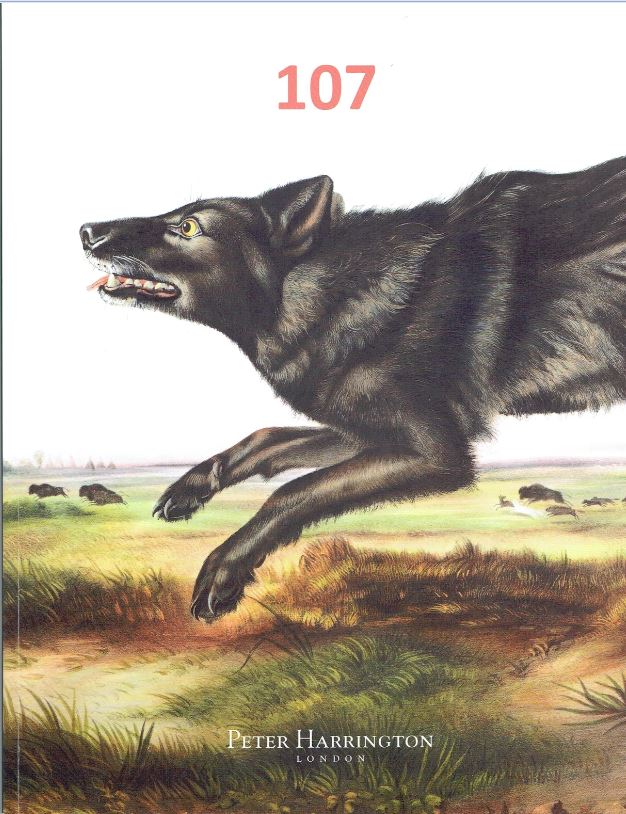 Peter Harrington has issued their Catalogue 107. Fifty Books, Manuscripts, and Prints. Subjects are varied, but this is top of the line material. Included are some of the most famous of books around, mostly literature, but also philosophy, science, economics, geography and even the very first edition of the Encyclopaedia Britannica. There is a copy of Irwin Shaw's The Young Lions that is fascinating for the annotations. They were made by Ernest Hemingway. Hemingway's younger brother was the model for one of the book's characters, and “Papa” was not at all pleased with the way Shaw treated him. He expresses that opinion repeatedly. Here are a few more of the pieces to be found among these fifty fine items.

We start with a book regularly described as the most important scientific work of the 19th century, and perhaps of a much larger time period. Item 10 is a first edition of Charles Darwin's On the Origin of Species by Means of Natural Selection... published in 1859. Little more needs to be said about this book other than many find it controversial even today, a century and a half after Darwin described the origin and history of life forms in a way previous generations could not have imagined. For many, it was, and is, unsettling. This is a presentation copy, given by the author to naturalist Edward William Harcourt. In 1856, Darwin had contacted Harcourt for information relating to birds on which the latter was an expert, and to borrow a German ornithology text Darwin used for understanding divisions between species. Harcourt is cited as a resource in the Origin. There are no known copies inscribed by Darwin. This one contains an inscription in Harcourt's writing - “E. W. Harcourt, from the Author, 1859.” Darwin gave publisher John Murray a list of 23 names to be given presentation copies. Those books were inscribed by a clerk at Murray's. Harcourt was not on that list, suggesting Darwin may have overlooked him at first before adding him to the list. Priced at £97,500 (British pounds, or about $150,393 in U.S. dollars).

Here is a piece from the good old days. It doesn't have a real title, but begins, Sir, I have the Honor to transmit to you a Report to the House of Representatives, relative to the Appropriations of Money, for certain Purposes therein mentioned. This is a first edition of the first official budget of the United States, prepared by Treasury Secretary Alexander Hamilton in 1791. The previous two years the Treasury Department had paid the nation's bills, but never submitted a formal budget to Congress. Hamilton had to deal with a difficult situation – debts from the war still to be repaid, along with running the nation's business with limited resources available. On top of this, Hamilton wished to use the tax system to encourage the nation's development. His skillful management of the country's finances was critical to America's success steering through these difficult early days. One thing we could only dream of today is the size of the annual federal budget in 1791. It was a mere $740,232.14. For comparison's sake, the federal government currently spends around $7 million per minute. President Washington's salary was $25,000, over 3% of the budget. If that percentage had been maintained, the President would be paid something like $115 billion per year today. Item 21. £22,500 (US $34,706).

Dust jackets are a major contributor to the value of most books, but this one is probably among the most valuable of jackets. Item 18 is a copy of the first British edition of F. Scott Fitzgerald's The Great Gatsby. It was published by Chatto & Windus in 1926, the year after the first American edition. It is scarcer than the American, but generally not as valuable as the true first edition. However, this copy has the iconic first state dust jacket, with the haunting Francis Cugat design of a woman's disembodied face. Fitzgerald himself was mesmerized by it. It is in near fine condition. The jacket has been adapted for the British edition, with a cutout on the spine for the Chatto & Windus name, the publisher's advertisements on the rear panel, and the price in shillings. Harrington notes that the British edition uses the same plates as the first two American ones, making this technically the third printing of the first edition. £100,000 (US $154,514).

This next item reaches the height of the map and atlas maker's art. Item 3 is Le Grand Atlas, ou Cosmographie blaviane... the first French edition (1663) of Johannes Blaeu's Atlas Major. The 17th century Dutch atlases were the greatest ever produced, and Blaeu's Atlas Major topped them all. This is a large paper edition, coming in 12 volumes. It contains 593 engraved maps and plates, mostly double-page, some folding. It is extra-illustrated with 28 maps and is colored in a contemporary hand. The maps are both beautiful and as accurate as could be obtained at the time. The atlas was generally limited to royalty and those of great means, it being one of the most expensive books ever published. Among its volumes is the first atlas of China published in Europe, 58 maps devoted to England and Wales, and 23 of America, including Virginia and New England. £750,000 (US $1,157,928).